Eight students have been named winners of the 2016 Spirit of Princeton Award, honoring Princeton University undergraduates for positive contributions to campus life. The award recognizes those who have demonstrated a strong commitment to the undergraduate experience through dedicated efforts in student organizations, athletics, community service, religious life, residential life and the arts.

This year's winners were selected from a group of over 70 nominees and were honored with a certificate and book prize during a dinner May 4. The Spirit of Princeton Award is sponsored by the Office of the Dean of Undergraduate Students and has been given annually since 1995. 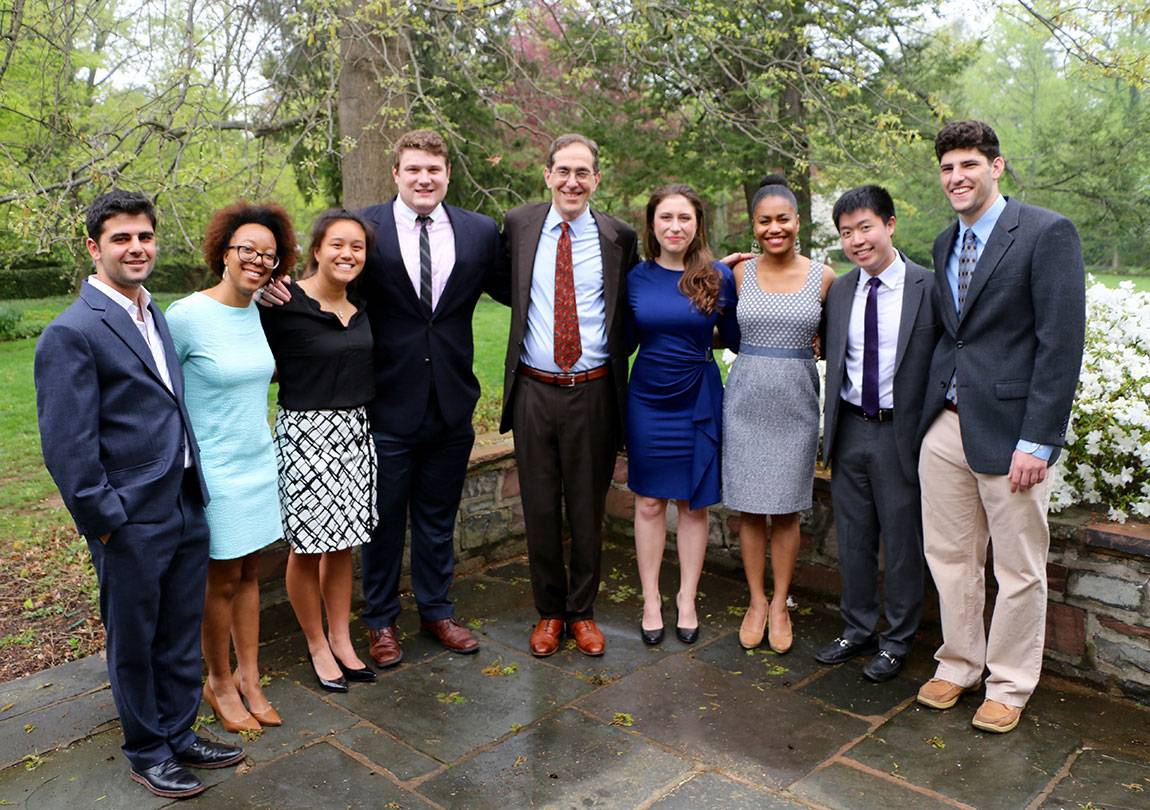 The winners of the 2016 Spirit of Princeton Award pose with President Christopher L. Eisgruber (center). The students were recognized for their strong commitment to the undergraduate experience at Princeton. (Photo courtesy of the Office of the Dean of Undergraduate Students)

The recipients of the 2016 Spirit of Princeton Award are:

Cameron Bell is a senior from Newport News, Virginia, majoring in history and earning certificates in African American studies and the Program in Teacher Preparation. She is a member of the Black History Month Planning Committee, student coordinator for the Department of African American Studies Senior Colloquium, member of the Pan-African Graduation Planning Committee and co-chair of the Senior Commencement Committee for Tiger Stay. She was also a member of Princeton Faith in Action's TruThursday Leadership Team; Princeton Internships in Civic Service Student Advisory Council; the Black Leadership Coalition; Princeton University Gospel Ensemble; and the Council of the Princeton University Community (CPUC) Task Force on Diversity, Equity and Inclusion. She is a member of Mathey College.

Yonatan Benyamini is a senior from Roslyn, New York, majoring in operations research and financial engineering. He is a member of Princeton Bhangra and the Religious Life Council. He serves on the Office of International Programs' Student Advisory Board and was an Undergraduate Student Government (USG) senator for the 2014-15 academic year. He is a member of Rockefeller College, where he also is a residential college adviser.

Naimah Hakim is a senior from Cortlandt Manor, New York. She holds a number of leadership roles in student government, including U-Council chair and co-chair of the USG Mental Health Initiative Board. Hakim has served as head fellow at the Carl A. Fields Center for Equality and Cultural Understanding, as well as a member of the Black Justice League. She is a member of the Naacho dance company, a vocalist in the Glee Club, former arts co-chair of the Wilson College Council and outgoing president of the Black Arts Company: Drama. She is part of 2D, the student vegetarian food cooperative, and is a member of Wilson College.

Lawrence Liu is a senior from Plano, Texas. He is majoring in the Woodrow Wilson School of Public and International Affairs and earning certificates in East Asian studies and values and public life. Liu serves on the coordinating board of Breakout Princeton, through which he has helped organize four civic engagement trips. He is also a volunteer tutor with the Petey Greene Program, a violist in the Princeton University Orchestra, a member of Princeton Evangelical Fellowship, a member of Manna Christian Fellowship, and an undergraduate associate for the Program in Law and Public Affairs. Previously, he was the head student coordinator of the Petey Greene Program, co-president of the Taiwanese-American Students Association and community service co-chair of Princeton Tower Club. Liu is a member of Rockefeller College.

Jack Mazzulo is a senior from Charlotte, North Carolina, majoring in molecular biology. He is a volunteer with the Student Volunteers Council, where he taught English for El Centro and volunteered in the emergency room at University Medical Center of Princeton at Plainsboro. He is also a senior staff photographer for The Daily Princetonian; an Orange Key tour guide; a USG Movies Committee chair; Frist Campus Center building supervisor; member of the Butler College Council; and a co-chair of the Senior Commencement Committee for Senior Montage. He was also a Butler/Wilson Dining Hall student manager; stage manager and photographer for diSiac dance company; photographer for Black Arts Company: Dance; cultural chair for Cap and Gown Club and a member of the Community Action support staff. He is a member of Butler College, where he is a residential college adviser.

Ian McGeary is a senior from North Brunswick, New Jersey, majoring in ecology and evolutionary biology. He was a defensive lineman on the varsity football team, and was president of Cannon Dial Elm Club. He was also the director of Teams and Toys service project and was the executive director of Princeton Water and Beverage Agency. He was a student crew manager for the 20th Reunion in 2014 and for the 5th Reunion in 2015. He is a member of Mathey College.

Beverly Nguyen is a senior from Davis, California, majoring in molecular biology. She is a tri-captain of the varsity women's swimming and diving team, and a member and enthusiast of Princeton Clockwork (women's club Ultimate Frisbee team). She is also a peer health adviser, a student-athlete wellness leader and an undergraduate researcher in the lab of Daniel Notterman, a lecturer with the rank of professor in molecular biology. She was a student crew manager for the 20th Reunion in 2015. She is member of Wilson College, where she is a residential college adviser.

Olivia Robbins is a senior from Wilmette, Illinois, majoring in English with a certificate in European cultural studies. She is a member of the Princeton Women's Mentorship Program, of which she formerly served as co-president, and the Pace Council for Civic Values, of which she formerly served as co-chair. She is also a member of the Behrman Undergraduate Society of Fellows; former teacher of philosophy, creative writing and current affairs seminars at two nearby correctional facilities through the Prison Electives Project; and former tutor for the Petey Greene Program. She is a student worker in the Department of Religion. She was an undergraduate representative for the Princeton University Committee on Women's Leadership and co-director of this year's production of The Vagina Monologues. She is a member of Rockefeller College.