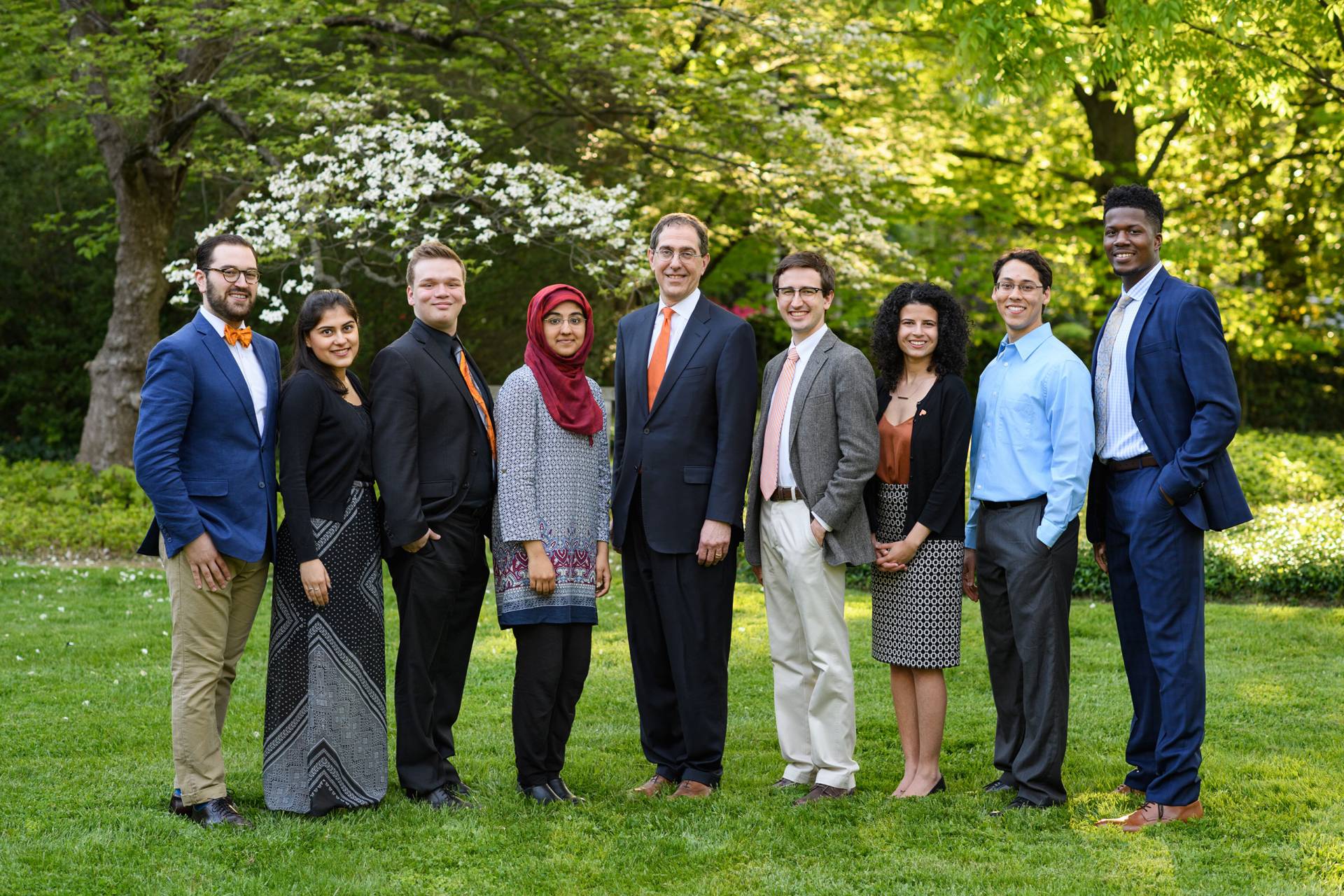 By Jeanne Laymon, Office of the Dean of Undergraduate Students

Eight students have been named winners of the 2017 Spirit of Princeton Award, honoring Princeton University undergraduates for positive contributions to campus life. The award recognizes those who have demonstrated a strong commitment to the undergraduate experience through dedicated efforts in student organizations, athletics, community service, religious life, residential life and the arts.

This year's winners were selected from a group of over 80 nominees and were honored with a certificate and book prize during a dinner on May 10. The Spirit of Princeton Award is sponsored by the Office of the Dean of Undergraduate Students and has been given annually since 1995.

The recipients of the 2017 Spirit of Princeton Award are:

Matt Błażejewski is a senior from Trenton, New Jersey, majoring in East Asian studies and earning certificate in translation and intercultural communication. He is a residential college adviser (RCA) at Mathey College where he also co-hosts weekly Chinese language tables. He has directed the "Me Too Monologues" and "Harvey"; served as the Theatre Intime community liaison and the publicity director; and performed in seven productions with Theatre Intime and Princeton University Players throughout his time at Princeton. He was a member of the Princeton Perspective Project, Mental Health Initiative Board, and represented the University at "Unmasking the Ivy League: A Conference on Mental Health."

Briana (Bri) Christophers, a senior from Miami, is majoring in molecular biology. She is a peer academic adviser and health professions adviser at Whitman College. As an undergraduate researcher, she was named "25 Under 25 in STEM" by the Princeton journal of science and technology "Innovation" for her work on zebrafish heart development. She was also the first undergraduate member of the Princeton chapter of the Society for the Advancement of Chicanos/Hispanics and Native Americans in Science. She is a head fellow for the Scholars Institute Fellows Program, was a 2016 Freshman Scholars Institute molecular biology course fellow, and co-founded Project Welcome Mat: A Guide for First-Gen Princeton Students. She served as an undergraduate representative on the University Priorities Committee and the Healthier Princeton Advisory Board. She is a member and former co-president and advocacy chair of Princeton Latinos y Amigos, member of the Latinx Collective, the Princeton University American Sign Language Club and the Princeton University Mentorship Program.

Jackson Forbes is a junior from Plano, Texas, majoring in architecture. He is a member of the varsity men's basketball team and an officer on the Varsity Student Athlete-Advisory Council. With Tiger Challenge, he employed the principles of design thinking to engineer a program to facilitate the acquisition of self-knowledge for students. He was the associate director of the Water and Beverage Student Agency. He is a member of Forbes College.

Hillel Friedman is a senior from Lawrence, New York, majoring in philosophy and earning a certificate in music theater. He is an RCA in Butler College. As a member of the Princeton Triangle Club, he served as composer and as president during its 125th anniversary year. He was an Orange Key tour guide, student president of Princeton's Chabad, music director of Koleinu and sang as a tenor in the Glee Club. He sat on the University Priorities Committee and was a member of the RCA training committee.

Hajrah Hussain is a senior from Jersey City, New Jersey, majoring in English and earning certificates in linguistics and global health and health policy. She is a peer health adviser in Forbes College, a UMatter fellow and a member of the Princeton University Mentorship Program. She has also worked as a research assistant in the Department of Sociology, where she studied access to mental health care. She has served as a member of the DREAM Team, the Muslim Students' Association Community Service Chair and was vice president of Tropical Clinics for Rural Health.

Colin Lualdi is a senior from Weston, Massachusetts, concentrating in physics and earning certificates in applications of computer science and linguistics. He co-founded the Princeton University American Sign Language Club and served as president for two years. He also co-founded SignSchool, an educational start-up that provides an online platform for learning American Sign Language, with support from the Keller Center. He is a student technology consultant for the Office of Information Technology and has served on the Whitman College Council. He has received the National Science Foundation's Graduate Research Fellowship Program award, the "25 under 25" award from the journal "Innovation," and the University's Pyka Memorial and Allen G. Shenstone Prizes in physics.

David Mazumder is a senior from Basking Ridge, New Jersey, majoring in molecular biology and earning certificates in quantitative and computational biology, neuroscience and classics. He is an RCA in Wilson College. He also is a UMatter fellow, as well as a member and former president of the Alcohol Initiative Board. He sings with the Katzenjammers, the Glee Club and Chamber Choir, and is a member of the Princeton Pianists Ensemble.

Durva Trivedi is a senior from John's Creek, Georgia, majoring in the Woodrow Wilson School of Public and International Affairs and earning a certificate in South Asian studies. She is a member of Naacho South Asian Dance Company, Princeton South Asian Theatrics and has served as a co-president of Princeton Hindu Satsangam. She is an RCA in Mathey College. She has written for "The Daily Princetonian," tutored in the McGraw Center for Teaching and Learning, and has worked for TigerCall in the Office of Annual Giving.