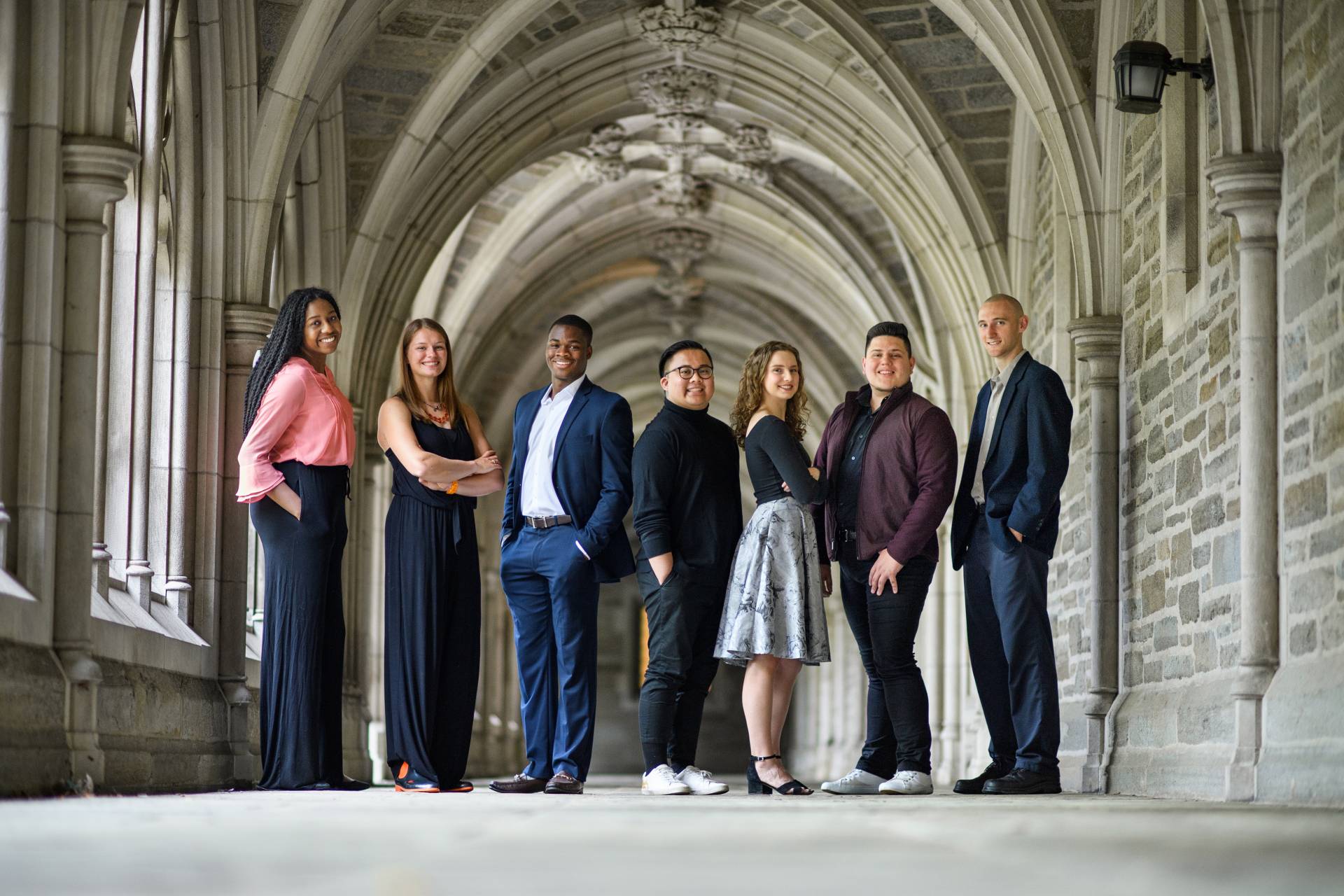 Claire Pinciaro, Office of the Dean of Undergraduate Students

Eight students have been named winners of the 2019 Spirit of Princeton Award, honoring Princeton University undergraduates for positive contributions to campus life. The award recognizes those who have demonstrated a strong commitment to the undergraduate experience through dedicated efforts in student organizations, athletics, community service, religious life, residential life and the arts.

The selection committee received over 100 letters of nomination on behalf of outstanding undergraduate students. This year’s winners will be honored with a certificate and a book prize during a dinner on May 8. The Spirit of Princeton Award is sponsored by the Office of the Dean of Undergraduate Students and has been given annually since 1995.

The recipients of the 2019 Spirit of Princeton award are:

Colin Yost is a senior from Portsmouth, New Hampshire, concentrating in chemistry. He is a residential college adviser in Forbes College, a Health Professions Advising peer adviser, an undergraduate teaching assistant in organic chemistry, and a chemistry peer tutor at the McGraw Center for Teaching and Learning. He is also a member of the Princeton University Percussion Players Ensemble and the Chemistry Outreach Program. He has served as the co-project leader for the College Counseling Project through the Student Volunteers Council and as the head writer for "Princeton Tonight."

G.J. Sevillano is a senior from Los Angeles, concentrating in politics with a certificate in American studies. He serves as an undergraduate committee member for both the Department of Politics and Program in American Studies. He has worked collaboratively with his peers through the Mellon Mays Undergraduate Fellowship and the Princeton Institute for International and Regional Studies (PIIRS) Undergraduate Fellowship. He has served as the president and social chair person for the Princeton HighSteppers, a student-run co-ed step team. He has also previously served as the Crossings project leader for Community House, has participated in the Behrman Undergraduate Society of Fellows, and has worked at the Frist Campus Center welcome desk. He is a residential college adviser in Butler College, where he was awarded the Community Builder of the Year Award.

Hannah Paynter is a senior from Lyme, Connecticut, majoring in psychology and pursuing certificates in the Program in Teacher Preparation and the Department of African American Studies. She has served as the president of Cloister Inn and the Inter Club Council. She is a member of the varsity women's openweight rowing team. She was involved in "Princeton Tonight," the Conservation Society and the Vote100 campaign. She was an Outdoor Action support team staff member and a fall-athlete Orientation leader. She is a volunteer tutor in social issues, algebra and the arts for the Princeton Learning Cooperative in the Princeton community, and was an Annual Giving TigerCaller for three years. She is a member of Wilson College.

Kyle Lang is a senior from West Salem, Wisconsin, majoring in psychology. He has served as treasurer and ministry team member for the Aquinas Institute, as a peer academic adviser in Forbes College, and as a service project leader, taking trips to a soup kitchen and a local farm. In addition, he plays French horn in the Princeton University Orchestra and Sinfonia, coaches middle school cross country, and received the Martin A. Dale '53 Award in 2017 to run across the United States. He is a member of Forbes College.

Marcia Brown is a senior from Shaker Heights, Ohio, majoring in history and earning a certificate in African American studies. She has served as news editor and as editor-in-chief of The Daily Princetonian. She is a member of the Glee Club and works as a ticketing associate for University Ticketing. She is a member of Forbes College, and Cap and Gown Club.

Moyin Opeyemi is a senior from Nazareth, Pennsylvania, concentrating in computer science. He is a member of the varsity men's soccer team and Profound Ivy, Princeton's minority student athlete mentorship program. He served as a steering committee member for the Men's Allied Voices for a Respectful and Inclusive Community (MAVRIC) Project, mentorship chair on the board of Princeton African Student Association, undergraduate treasurer for Ivy Club, and as a Student-Athlete Wellness Leader. He is also a member of Athletes in Action, Princeton Faith and Action, and Rockefeller College.

Nnenna Ibe is a senior from North Brunswick, New Jersey, majoring in ecology and evolutionary biology with a certificate in African studies. During her time at Princeton, she was a member of both the varsity volleyball and varsity track teams. She is a member of Cannon Dial Elm Club and has been a part of the Freshman Scholars Institute (FSI) community. Having initially been a student member, she continued on to serve as a head fellow for the Scholars Institute Fellows Program (SIFP). She is a member of Rockefeller College.

Samuel Vilchez Santiago is a senior from Orlando, Florida, majoring in politics and earning certificates in Latin American studies, Latino studies, American studies and Spanish. He has served as co-president and advocacy chair of Princeton Latinos y Amigos, national liaison for Princeton’s Quest Scholars Network Chapter, a U-councilor on the Undergraduate Student Government, and a member of the Princeton DREAM Team. Additionally, he has served as a member of the American Studies Student Advisory Board and the Faculty-Student Calendar Reform committee. He is a residential college adviser in Whitman College.