Nine students have been named winners of the 2012 Spirit of Princeton Award, which honors undergraduates at Princeton University for their positive contributions to campus life. The award recognizes students who have demonstrated a strong commitment to the undergraduate experience through dedicated efforts with student organizations, athletics, community service, religious life, residential life and the arts.

This year's winners were selected from a group of more than 80 nominations and were honored with a book prize at a dinner earlier this month. The award, which has been given annually since 1995, is sponsored by the University's Office of the Dean of Undergraduate Students. 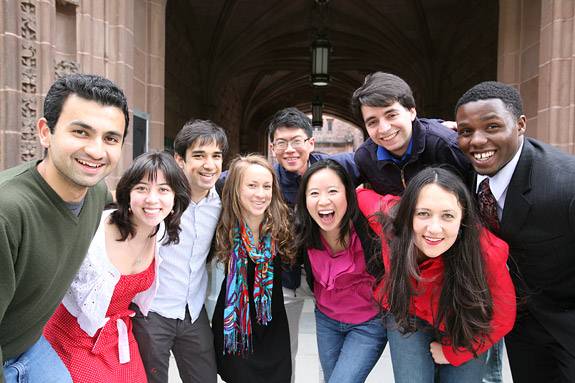 Here is information about the 2012 winners:

Lydia Arias, a senior from Atlanta, is majoring in Spanish and Portuguese languages and cultures. During the past four years, she has been a member of the varsity track and field team, where she has been a successful competitor in the pole vault. For the past two years, she has been a learning consultant at the McGraw Center for Teaching and Learning. She played a pivotal role in the redesign of the center's Learning Consultation Program and also helped foster a greater partnership between the McGraw Center and the Department of Athletics. Within Butler College, she is a two-year residential college adviser and has served as a peer adviser. She also has been active in student organizations as a member of Aquinas Catholic Chaplaincy, Princeton Faith in Action and the Cuban American Student Association. Upon graduation, she will work at Bain Consulting in Atlanta.

Omar Carrillo, a senior from Los Angeles, is majoring in the Woodrow Wilson School of Public and International Affairs and earning certificates in American studies and urban studies. Committed to community service, he has been involved with the English as a Second Language El Centro program for four years through the Student Volunteers Council. Through the Pace Center for Civic Engagement, he served as an education intern during the summer of 2010, developing implementation modules for college awareness curriculum sequences at two high schools in Brooklyn, N.Y. Building upon that particular experience, he helped lead the Pace Center's Breakout trip to those high schools the following year. On campus, he has been involved with the student newspaper, The Daily Princetonian, where he participated as an associate editor for news and as a senior writer. He was one of the founding members of the DREAM Team, which seeks to raise awareness about the aspirations of undocumented students, following his time as an intern at the University of California-Los Angeles Center for Labor Research and Education in the summer of 2009. He also coordinated the Latinos Unidos for Networking and Advising program through the Fields Center for Equality and Cultural Understanding and served on the student advisory board of the Program in American Studies. At Forbes College, he has been a residential college adviser.

Christina Chang, a senior from Austin, Texas, is majoring in chemistry while pursuing certificates in applications of computing, engineering biology, and materials science and engineering. Over the last four years, she has helped share her passion for science and engineering with others in the community and on campus. She helped establish the Community House After School Academy and has been a mainstay of the Chemistry Outreach Club. Chang also founded the Women in Science Colloquium, serving as its initial president, and she helped form the Princeton University Chemistry Society. Beyond her contributions to the science community, she has been an Orange Key tour guide, a Princeton Preview captain and an executive board officer of Community House. Having contributed to Princeton research laboratories in areas ranging from bioinformatics to inorganic chemistry, she has been awarded the Gladys Anderson Emerson Scholarship by Iota Sigma Pi and the 2011 Barry M. Goldwater Scholarship. As a recipient of the 2012 Marshall Scholarship, she will spend two years in England studying for a master's degree in sustainable energy futures at Imperial College London, followed by a master's degree in inorganic chemistry at the University of Cambridge.

Benjamin Cogan, a senior from New York City, is majoring in philosophy and pursuing certificates in Judaic studies and values and public life. A student leader devoted to advancing the discussion of ethics-related issues, he has served as president of the Human Values Forum, a group that brings together faculty members and students through a weekly dinner series. He cofounded Princeton Giving What We Can, an organization committed to promoting effective global poverty philanthropy, for which he organized a fellowship, brought several speakers to campus and led a student pledge drive. Cogan also is a member of the College Democrats and served as editor-in-chief of the student magazine American Foreign Policy. He also developed international simulations for Princeton Model United Nations and served as a peer representative for students accused of Honor Code violations. A contributor to campus religious life, he is a student leader of Zamru, an interactive Jewish service featuring a mix of undergraduates and community members; has served as co-chair of Kesher, the Reform Jewish student group; and sings in Koleinu, Princeton's Jewish a cappella group. In the summer of 2010, he spent two months in New Delhi living at an orphanage, teaching and mentoring children. Upon graduation, he will be studying Jewish texts and history at the Pardes Institute of Jewish Studies in Jerusalem.

Jonathan Ford Jr. is a senior from Huntsville, Ala., majoring in anthropology. As part of his studies and independent work, he has conducted fieldwork in Germany. He is a residential college adviser in Rockefeller College. He formerly served as the president of the Black Men's Awareness Group and continues to work in an advisory position within the organization. He has spent this semester as a member of the club basketball team and a tenor in the Princeton University Gospel Ensemble. He also has been a cast member of the Black Arts Company, playing the role of "Michael Conley" in their first full-length play, "Balancing Act." He has provided security for campus events as a member of the Safeguards student agency, served as the former communications chair for the Hallelujah Worship Committee and worked as a counselor for the High School Diplomats Program that brings together American and Japanese students on the Princeton campus. Next year, he will enroll in the master's in management program at Wake Forest University's School of Business.

Shirley Gao, a junior from Davis, Calif., is a Wilson School major with plans to earn a certificate in global health and health policy. Currently, she is a co-chair of the Pace Council for Civic Values, where she has helped establish and improve a number of community service initiatives. She has twice planned Reflections on Service, an annual orientation event that introduces incoming students to service opportunities, and she has been a participant, leader and two-time coordinator for Pace Center Breakout trips. In addition to her work with the Pace Center, she has twice served as a co-chair for the town-gown event Communiversity, and she is a member of the Wilson School's Student Advisory Committee as well as the Undergraduate Bernstein Gallery Committee, which reviews the exhibition schedule for arts shows in the lower floors of Robertson Hall. She was selected as a student representative to the University's Priorities Committee this year. A former chair of the Mathey College Council, she also has been a writer for the University Press Club, an Outdoor Action leader, and a HEART (Health Education and Rescue Training) and CPR instructor. She is a current member of Leadership for Change, an initiative to provide students with leadership development opportunities on campus. During her summers, she has participated in a University-sponsored Global Seminar in Ghana and England, traveled on a two-week trip to Cambodia through the Office of Religious Life and served as a finance intern for the Center for Public Integrity in Washington, D.C. This summer she will serve as an intern for Wellbody Alliance in Sierra Leone through the International Internship Program and will travel to the former Yugoslavia with the Office of Religious Life to study conflict resolution and sustainable peace-building.

Faaez Ul Haq, a senior from Islamabad, is a computer science major also pursuing certificates in the Wilson School and Near Eastern studies. Over his years at Princeton, he helped lay the groundwork for Princeton's social entrepreneurship scene. As co-founder of the Princeton Social Entrepreneurship Initiative, he led efforts to foster social entrepreneurship on campus, building resources and relationships with organizations such as the Keller Center for Innovation in Engineering Education and the Princeton Entrepreneurship Club, where he was an officer. He also has been a two-time winner at the TigerLaunch student entrepreneurship contest. He has been involved as an undergraduate fellow at the Liechtenstein Institute on Self-Determination and currently serves as an undergraduate member of the Computer Science Council. He serves as a peer adviser for the Wilson School, and also has been a dormitory assistant and a residential computing consultant. In other extracurricular activities, he was a member of the Muslim Students Association, the Pakistani student group Pehchaan and the International Relations Council, a staff photographer for The Daily Princetonian and a staff member at the Humanities Resource Center. Outside of Princeton, he has worked at Google and Goldman Sachs. He also spent a summer in Sierra Leone working with One Laptop Per Child, setting up infrastructure and deploying 130 laptops in a remote village. He also received an honorable mention in the Computing Research Association's Outstanding Undergraduate Researchers Award in 2012. After graduation, he will join Microsoft as a program manager.

Yu-Sung Huang, a senior from Richmond, Va., is concentrating in operations research and financial engineering with certificates in the Wilson School, engineering management systems and finance. He served as the president of the Taiwanese American Student Association and is a member of Leadership For Change. He is a two-year residential college adviser in Rockefeller College and a three-year Outdoor Action leader. He has also served on a number of University committees, including the Priorities Committee, the Alcohol Coalition Committee and the Vice President for Campus Life's Orientation Working Group. With the Alcohol Coalition Committee, he has been part of the Prospect Dinners Working Group, a team that brings faculty, students and staff together for an open conversation about Princeton student culture around alcohol and how it impacts the student experience. Upon graduating, he will join the Chicago office of the Boston Consulting Group.

Haley White, a senior from Chatham, N.J., is concentrating in the Wilson School. During the 2009-10 and 2010-11 academic years, she served as co-chair of the Pace Council for Civic Values. Recognizing the untapped energy for service in Princeton's independent eating clubs, she worked over several months to form personal relationships with club leaders and helped launch the 2011 Inter Club Community Fundraiser, a 10-day program in which the clubs raised money for a New Jersey nonprofit, a project she repeated in 2012. She also has organized a Pace Center Breakout trip about economic development in Buffalo, N.Y., taught English as a Second Language classes through the Petey Greene Prisoner Assistance Program, written columns for The Daily Princetonian and led a national finalist team of Princeton students in the Ashoka Foundation Changemaker Challenge, a nonprofit consulting competition. She has served on various committees, including the Priorities Committee, and as the senior commissioner of a Wilson School junior policy task force. During her freshman year, she worked with Dining Services to sell fair trade bananas in campus dining venues. She has been named a Fulbright Scholar, a Truman Scholar, a U.S. State Department Critical Language Scholar in Hindi and a winner of one of the University's Dale Summer Awards. Next year, she will move to Brazil to pursue her Fulbright, after which she will take a job with the Boston Consulting Group in Mexico City.