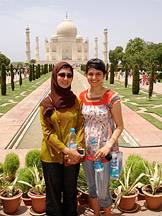 Mariam Rahmani (left), a member of Princeton's class of 2010, and Sarah Dajani, who graduated this spring, visited the Taj Mahal during the Religious Life Council's trip to India this summer. Twenty-two Princeton students participated in the eight-day excursion, which gave the students an opportunity to explore religious pluralism in keeping with the council's mission of fostering conversation among members of all religious faiths. (Photo: Manav Lalwani)

Princeton student Jahnabi Barooah has lived in India all her life, but a trip there this summer to explore interreligious understanding with 21 fellow students allowed her to see her country in a new way.

"I knew that traveling to India with a multifaith group with a specific goal of understanding religious pluralism would enable me to understand India differently," said Barooah, a member of the class of 2011. More than the temples and mosques she saw, it was the discussions with her travel companions, she said, that helped "me to view India and specifically Indian customs and culture in a new light."

Barooah and the other students are members of Princeton's Religious Life Council, a fellowship of undergraduates of various religions who are committed to fostering conversation among members of all religious faiths at Princeton and beyond. Led by Paul Raushenbush, associate dean of religious life, the group spent eight days visiting ancient and current religious sites in Delhi, Agra and Jaipur and discussing religious pluralism.

The goal of the trip was to "to look at how religious pluralism and interreligious engagement happens in India and how higher education can be a locus of sustained interfaith dialogue and understanding," Raushenbush said.

The 22 students have a host of religious and geographic backgrounds. Among the group were students from Egypt, Ethiopia, India, Iran, Israel and South Africa. Six different religions — and several branches of each religion — were represented. There were Buddhists; Christians from the Catholic, Orthodox and Protestant branches; Hindus; Jews from Conservative, Orthodox and Reform backgrounds; Muslims from the Shia and Sunni faiths; and a Jain student. Some of the participants were atheists. Their academic interests also vary widely. There were students majoring in comparative literature, math, philosophy, political science, religion and the Woodrow Wilson School of Public and International Affairs.

After the trip, several of the participants traveled to Dharamsala and met with the Dalai Lama (center), the head of the Tibetan Buddhists. From left are: Nikhil Bumb, class of 2008; Deepa Iyer, class of 2009; Paul Raushenbush, associate dean of religious life; Olaf Sakkers, class of 2011; Manav Lalwani, class of 2009; and Esther Breger, class of 2010. (Photo: Courtesy of the Religious Life Council)

The trip included an elephant ride up to the 16th-century Amber Fort in Jaipur; a visit to Delhi's Qutab Minar, the largest brick minaret in the world; and an excursion to the Taj Mahal. Over four days in Delhi, the students went to a cathedral, a mosque, and temples devoted to the Baha'i, Hindu, Jain and Sikh faiths. They also celebrated the Jewish Shabbat.

Visiting so many sites of religious observance prompted lively discussion among the students. And the students, as members of the Religious Life Council, "were newly awakened to the realization that our mission as ambassadors (of interreligious exploration) extends beyond India back to Princeton itself and beyond," according to Rachel Dunn, a member of the class of 2010 who wrote a blog about the trip. 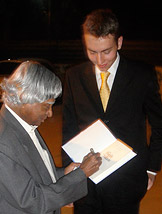 Abdul Kalam (left), the former president of India, signed a copy of his book "The Family and the Nation" for Princeton student Olaf Sakkers, class of 2011, after meeting with the Religious Life Council. (Photo: Melekot Abate)

The students also met with Abdul Kalam, the former president of India, with whom they discussed approaches to eradicating conflict among members of different religions. "I was most intrigued by former President Kalam’s three-part strategy for erasing faith-based conflict: 1) material progress; 2) character education, particularly in primary schools; and 3) turning religion into spirituality," said Rahul Subramaniam, a member of the class of 2011.

On a trip to Raj Ghat, the memorial for spiritual leader Mohandas Gandhi, the group held a peace meditation and sang the Indian national anthem. For Emmett Buckley, a member of the class of 2011, the visit was a high point of the trip. "I've seen a quote attributed to Gandhi in which he said, 'Let us work together for unity and love,'" Buckley said. "That could be the mission statement for any interfaith group, so being at his memorial with the Religious Life Council was very special."

After the trip's conclusion, five students, accompanied by Raushenbush, traveled to Dharamsala, the home of the Dalai Lama, the head of the Tibetan Buddhists. The group unexpectedly was given an audience with the Dalai Lama, spending more than an hour talking to him about interreligious engagement.

Visiting holy sites for so many different religions "inspired an incredible range of thoughts and perspectives" for the students, Raushenbush said.

For Avital Hazony, a member of the class of 2012, the trip provoked engaging debates with her fellow students on a variety of topics, such as the question of whether all religions are striving for the same goals or whether there are fundamental differences among them. The trip was "a journey of questioning and soul-searching," she said.

The India trip, which was supported by Indian businessman and philanthropist Vinay Rai, is part of efforts by the Office of Religious Life to expose Princeton students to global perspectives. In late August another group of 20 students will visit Venezuela and Bolivia with Alison Boden, dean of religious life and the chapel, and Deborah Blanks, associate dean of religious life, to study religion, human rights and social change. They will meet with religious leaders, government officials and community-based groups, among others.

"We look forward to getting as detailed an understanding as possible of the variety of opinions in each country on rights and social change, on the role of religious communities and of perceptions of American foreign policy," Boden said.