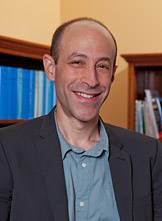 Matthew Weiner, who has worked as an interfaith organizer for 20 years, has been named associate dean of religious life at Princeton University. His appointment is effective Sept. 1.

Weiner's career has focused on promoting interfaith connections through dialogue, service learning and social justice programs, as well as interfaith prayer projects. He served for the last nine years as program director at the Interfaith Center of New York, where he developed a local network of 500 religious leaders that focused on social change by addressing topics such as domestic violence, hate crimes and environmental justice.

"Matt Weiner brings to the Office of Religious Life a wealth of relationships within the inter-religious world regionally, nationally and internationally," said Dean of Religious Life and the Chapel Alison Boden, to whom Weiner will report. "We are thrilled to have him join us in extending the reach of Princeton's interfaith work further outward into the world, while bringing to Princeton some of the critical work on interfaith understanding that is being done around the globe."

At Princeton, Weiner will oversee inter-religious programming for the Office of Religious Life. His duties will include: advising the Religious Life Council, which is a fellowship of students who foster relationships between all religious faiths at Princeton; supervising the University's coordinators of Hindu and Muslim religious life; organizing University programs that provide opportunities for spiritual reflection in response to major campus, national and world events; and fostering new relationships between the Office of Religious Life and global interfaith and religion-based justice organizations.

"The position of associate dean of religious life is an extraordinary opportunity for me to apply my extensive networks and experience to help create a blueprint for how interfaith work is conceived of and developed at Princeton," Weiner said.

Weiner previously worked for several international organizations, serving as a liaison for religious leaders for the Global Forum of Parliamentarian and Spiritual Leaders, which brought together world leaders, artists and educators through a series of conferences in the 1990s, and the Millennium World Peace Summit held at the United Nations in 2000. He created a peace education program in Sri Lanka, and has worked with several U.N. agencies.

Weiner, who self-identifies as Jewish and is a practicing Buddhist, earned his doctoral degree in theology from Union Theological Seminary and his master of theological studies from Harvard Divinity School. He has a bachelor's degree in comparative literature from New York University.

Weiner succeeds Paul Raushenbush, who is now the senior religion editor for the Huffington Post.