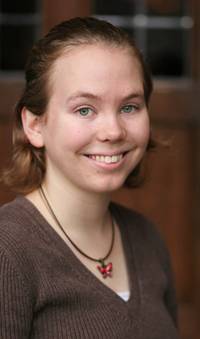 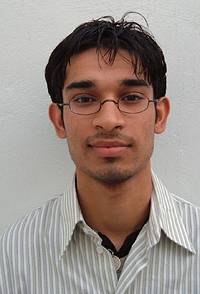 Allison Bishop, a senior majoring in mathematics, and Yusufi Vali, a 2005 alumnus currently studying in Syria, have been awarded 2006 Marshall Scholarships for graduate study in England.

Bishop and Vali are among 43 students from U.S. colleges and universities to win the prestigious awards, which cover the cost of living and studying at a British university of the recipient's choice for two or three years. Bishop will pursue a certificate of advanced study in mathematics and begin doctoral studies at the University of Cambridge. Vali will attend the School of Oriental and African Studies in London, where he will pursue a master's degree in Islamic studies.

Bishop, formerly of Lansing, N.Y., and now a resident of Omaha, Neb., entered Princeton seeking creative outlets and expected to major in English en route to becoming a teacher and novelist. An early course in number theory redirected her focus to mathematics, although she continues to write fiction and compose music.

"The nearly limitless creative potential of pure mathematics became clear to me, opening up innumerable possibilities. I decided that venturing into the scientific and mathematical worlds would give me more to write about," she said.

For her senior thesis, Bishop is writing a textbook for undergraduates, which addresses the difficulty of learning to write proofs and provides a broad introduction to the range of mathematical subjects. She also is pursuing a certificate in women and gender studies to gain additional perspective on issues facing women in the mathematics field.

Sun-Yung Alice Chang, professor of mathematics, said, "Allison is bright and highly disciplined. She will be successful in whatever career she chooses. In particular, she has the talent, the background and the discipline to become a very successful mathematician."

Bishop won the Shapiro Prize for Academic Excellence and a Goldwater Scholarship for outstanding undergraduates interested in careers in mathematics, science or engineering. She has participated in summer research programs at the University of Nebraska-Lincoln and the National Security Agency as well as a summer program for women in mathematics at the Institute for Advanced Study in Princeton.

Bishop is a member of Chapel Choir and the Wind Ensemble and serves as a tutor and academic adviser for fellow undergraduates. She also has worked as a volunteer tutor at the Trenton Rescue Mission.

Vali, who graduated in 2005 with a degree in Near Eastern studies, is spending this year in Syria on a Fulbright fellowship conducting research on a Sufi movement to foster interfaith dialogue between the country's Muslim and Christian communities. He also is making a documentary on life in Syria.

Vali plans to pursue a career in the human rights field in the Islamic world, either through the United Nations or a nongovernmental organization, to counter violent versions of Islam. "As a believer in Islam's message of social justice, I see it [as] my duty to struggle against this terrifying ideology on all three relevant levels -- the political, socioeconomic and religious," he said.

Vali, a resident of Jefferson City, Mo., was born in the United Arab Emirates and lived in India before coming to the United States. At Princeton, he won the Near Eastern studies department's F.O. Kelsey Prize for the best junior paper and the T. Cuyler Young Prize for the best senior thesis in Iranian studies.

Hossein Modarressi, professor of Near Eastern studies and Vali's thesis adviser, said, "I found him a bright and hardworking student who took his studies very seriously and pursued a rigorous course of study that enabled him to think intelligently about a wide range of issues in modern Middle Eastern studies."

Vali helped organize a series of conferences on Afghanistan for the Liechtenstein Institute on Self-Determination -- in Princeton, Austria, Germany, Liechtenstein and Turkey -- and served as the institute's Webmaster. He also was community service chair of the Muslim Students Association, a member of the Religious Life Council, acting chair of the University Film Organization and a member of the club soccer team.

"He was always fully involved, both intellectually as well as on the human level, and truly represents the best of the Princetonian spirit," Danspeckgruber said. "I am both very proud and not at all surprised that he received this great honor."

The Marshall Scholarships were established in 1953 as a British gesture to the United States for the assistance received after World War II under the Marshall Plan. The scholarships are awarded to American students who have demonstrated academic excellence and leadership potential.