They are among 43 students from U.S. colleges and universities to win the prestigious awards, which cover the cost of living and studying at a British university of the recipient's choice for two or three years.

The Marshall Scholarships were established in 1953 as a British gesture to the United States for the assistance received after World War II under the Marshall Plan. The scholarships are awarded to American students who have demonstrated academic excellence and leadership potential. 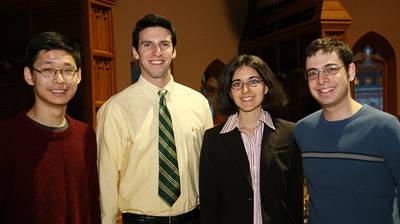 Broderick, a native of Parma, Ohio, is concentrating in mathematics and also is pursuing certificates in applications of computing and in applied and computational mathematics.

She will enroll in a one-year master's program in mathematics at the University of Cambridge and then pursue research in probability theory. She ultimately hopes to become a professor of mathematics and to serve as a role model for other women in the field.

"My choice to pursue a mathematical career is not just a straightforward matter of chasing my interests and sense of purpose. I often find myself questioning the role my gender plays in my career decisions," Broderick said. "Certainly, incidents of outright sexism and racism are thankfully becoming rarer.  … But women and minority races are still woefully underrepresented in the mathematical sciences."

Broderick was awarded this year's Class of 1939 Princeton Scholar Award, which is given to the undergraduate who, at the end of the junior year, has achieved the highest academic standing for all preceding college work at the University.

"Tamara's academic abilities are truly superb," said Robert Schapire, professor of computer science, who taught Broderick in three courses and worked with her on an independent project to study the use of various algorithms for tracking the movements of animals equipped with radio transmitters.

"Tamara helped make a huge success of this project using her intelligence, knowledge, hard work, persistence, enthusiasm and creativity," Schapire said. "Tamara is truly exceptional, with limitless energy and academic strength. Her appetite for new knowledge seems without bound. Refreshingly, she is driven by a genuine desire to learn about the wide range of topics that interest her."

She is co-president of the Math Club and has been active in Princeton Engineering Education for Kids, a program through which undergraduates visit elementary schools and teach children basic principles of engineering using Lego toys. She has been an undergraduate fellow and peer adviser at Mathey College and has served as an Outdoor Action leader.

In summer 2005, Broderick was one of 24 undergraduate mathematics students to conduct research as part of the Director's Summer Program of the National Security Agency and was one of two students asked to return for a special international program the following year.

Eshel, a native of Bethesda, Md., is a molecular biology major and a candidate for a certificate in neuroscience. He plans to pursue two one-year master's programs, in clinical neuroscience and public health, at the University of London.

Eshel has gained extensive research experience in neuroscience at Princeton and in internships with the World Health Organization and the National Institute of Mental Health. He has co-written several published papers based on his research, including two that were recently published with Eshel as the lead author.

Eshel plans to use his Marshall Scholarship to chart a path toward a career linking his interests in neuroscience and public health. "Whether as a clinician, a policy-maker, a journalist or a researcher -- or, in my dream job, director of the National Institutes of Health -- I want to use my understanding of neuroscience to inform global health policy and my appreciation for public health to shape the direction of neuroscience," he said.

"Neir is a unique and admirable individual, and one of the most impressive undergraduates with whom I have had the pleasure to work during my career as a university professor, including the eight years I have spent at Princeton," said Jonathan Cohen, director of the Center for the Study of Brain, Mind and Behavior and co-director of Princeton's neuroscience institute. Eshel has been a research assistant at the center since 2004, focusing on the neural bases of decision-making.

Cohen said Eshel's plans for graduate study "reflect the balance in his interests and character: his seriousness of purpose as a scientist, and his conscience as a human being. … Based on these plans, and my personal experience working with Neir over the past several years, there is no question in my mind that he is destined to a remarkable career blending and balancing science and public service."

Eshel is the managing editor of The Daily Princetonian, and has received the student publication's Class of 1961 Newspaper Writing Award as well as a first-place award for investigative reporting from the New Jersey Press Association. He has been awarded a Goldwater Scholarship and the Shapiro Prize for Academic Excellence. Eshel also is a member of the Klezmocrats, a klezmer ensemble, and has been an undergraduate fellow and peer adviser at Rockefeller College.

Li, who is from Portland, Ore., is a computer science major and a certificate candidate in mathematics. He will enroll in a one-year master's program in mathematics at Cambridge, and then plans to pursue doctoral research in mathematics, focusing on information theory.

Li, whose research interests also include mathematical finance and physics, hopes to a build a career focusing on "fundamental and foundational questions that can be tackled with interdisciplinary approaches like the ones I have pursued conducting research at Princeton. … Math is ideal for such work as it sits at the intersection of these fields and because of my philosophical inclinations. Despite a penchant for the theoretical, I ultimately want to apply theory to problems that affect the real world," he said.

Li has held internships with the Princeton Plasma Physics Laboratory, Google, Intel and Bloomberg's quantitative financial research division, which have "helped ground theoretical aspiration in practical application." He also has pursued interdisciplinary research in his independent work at Princeton, including a software development project that incorporated mathematical proofs.

"I learned a great deal when Michael Li did his junior independent work with me," said Edward Nelson, professor of mathematics. "It was like working with an outstanding graduate student."

Li is co-chair of the Undergraduate Research Symposium's steering committee. He has been an undergraduate fellow and peer adviser at Rockefeller College and a peer adviser for incoming students in the School of Engineering and Applied Science.

Sittenfeld is planning to pursue a career in journalism, building on his experience as president of the Princeton University Press Club, the country's oldest organization of professional student-journalists. Sittenfeld has contributed to The New York Times, The Trenton (N.J.) Times, the Princeton Alumni Weekly and The Daily Princetonian, among other publications.

Sittenfeld chose to study literature at Oxford because "it is critical for the career I hope to have as a writer of creative nonfiction that I continue to be a student of fiction." The program in economic and social history "will help me move from beyond simply narrating effects to thinking more critically about causes," he said.

John Fleming, the Louis Fairchild '24 Professor of English and Comparative Literature Emeritus, said, "P.G. Sittenfeld brings joy to his professors with his peculiar concoction of academic brilliance and sometimes quirky intellectual independence and originality. He is a powerful writer with a lively wit. In him the vanishing art of preceptorial repartee lives on. At the same time, he is animated by an articulate sense of worthy social purpose and endowed with the political skills that can give it effective direction."

Sittenfeld won the English department's Francis Biddle Sophomore Prize for essay writing. He is an undergraduate fellow of Forbes College, a member of the student advisory board of the Program in American Studies and an Orange Key campus tour guide.