Princeton celebrated the accomplishments of its students with the awarding of four undergraduate prizes at Opening Exercises Sunday, Sept. 11.

"As a research institution with a deep commitment to undergraduate education at its core, Princeton is proud to begin the academic year by honoring this outstanding group of students for their intellectual curiosity and academic accomplishments," Dean of the College Valerie Smith said. 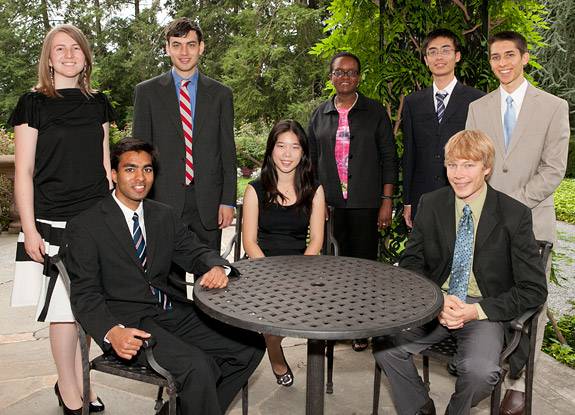 Eugene Katsevich received the Freshman First Honor Prize, which is awarded each year to a sophomore in recognition of exceptional academic achievement in the work of the freshman year.

Katsevich lives in Oviedo, Fla. He graduated from Oviedo High School and has competed in math competitions since the sixth grade, including the Princeton University Math Competition and Virginia Tech Regional Mathematics Contest while he was in high school.

An A.B. candidate, Katsevich plans to major in mathematics and is considering certificates in applications of computing and in applied and computational mathematics.

At Princeton, he served as the "Problem Czar" for the 2011 Princeton University Math Competition, in which he oversaw all of the writing of the mathematical problems. A member of Wilson College, Katsevich participates in a variety of intramural sports and organized the first Dodge-Osborn Cup pingpong tournament last year in Dodge-Osborn Hall of Wilson College.

This summer, Katsevich worked on an internship in medical imaging. His research focused on the interior problem of computed tomography (CT) imaging, which involves reconstruction algorithms that can help lower the amount of radiation a patient receives during CT scans.

The George B. Wood Legacy Sophomore Prize is presented each year to a member of the junior class in recognition of exceptional academic achievement during the sophomore year. This year, the prize is shared by Irene Lo and Aman Sinha.

An A.B. candidate, Lo is a mathematics major and is considering certificates in engineering and management systems and in Russian and Eurasian studies. Her research interests include topics related to combinatorial geometry and graph theory. This summer, she studied Russian as part of a Princeton in St. Petersburg program at the Nevsky Institute of Language and Culture.

Lo was awarded the Freshman First Honor Prize and Shapiro Prize for Academic Excellence last fall, and was the recipient of the Manfred Pyka Memorial Prize in Physics for 2009-10.

A member of Wilson College, Lo sings with the Princeton University Chapel Choir, serves as music director for the student a cappella group Kindred Spirit and is a member of Manna Christian Fellowship.

A candidate for the Bachelor of Science in Engineering, Sinha is a mechanical and aerospace engineering major pursuing certificates in applications of computing, and in applied and computational mathematics. He received the Shapiro Prize for Academic Excellence last fall.

His research interests include computational modeling techniques in applications ranging from computational fluid dynamics to feature detection and pattern recognition. In January, Sinha coauthored a paper published in the journal Physics of Fluids with Alexander Smits, the Eugene Higgins Professor of Mechanical and Aerospace Engineering, and mechanical and aerospace engineering graduate student Leo Hellstrom.

This summer, Sinha completed an internship at the pharmaceutical company Merck. He helped develop software for the automated segmentation and registration of medical images, which is used in bone analysis and tumor recognition.

The George B. Wood Legacy Junior Prize is given to a member of the senior class in recognition of exceptional academic achievement during the junior year. The prize is shared this year by Anna Patej and Jonathan Sarnoff.

An A.B. candidate, Patej is majoring in physics and pursuing a certificate in Spanish language. Her research interest is in astrophysics, with a focus on the topic of dark matter. She conducted research at the Large Hadron Collider at the European Organization for Nuclear Research (CERN) in Geneva during the summer of 2010 and spent this summer doing astrophysics research at the University of Oxford.

Sarnoff lives in Stamford, Conn., and is a graduate of Horace Mann School. An A.B. candidate, he is majoring in philosophy.

He has twice been awarded the Shapiro Prize for Academic Excellence and also won the Quin Morton '36 Writing Seminar Essay Prize. He completed two junior papers on the topics of metaphysics and epistemology, and he plans to write his senior thesis examining questions of free will and moral responsibility.

This summer, he participated in a Princeton Global Seminar in Istanbul and interned at the Istanbul Chamber of Industry.

Sarnoff is chair of the Daily Princetonian editorial board, is a lesbian, gay, bisexual, transgender (LGBT) peer adviser, and also is a member of the Behrman Undergraduate Society of Fellows in the Council of the Humanities and the Human Values Forum in the University Center for Human Values.

This year's Class of 1939 Princeton Scholar Award is shared by Nathaniel Fleming and Tengyao Wang. The award is given to the undergraduate who, at the end of the junior year, has achieved the highest academic standing for all preceding college work at the University.

Fleming lives in Eugene, Ore., and graduated from South Eugene High School. He twice won the Shapiro Prize for Academic Excellence and also has won the Howard Crosby Warren Junior Prize in Psychology.

An A.B. candidate, Fleming is a psychology major and is pursuing a certificate in French language and culture. His research interest in psychology focuses on the neuroscience of religious and spiritual experiences, while his work in French focuses on moralist literature during the reign of Louis XIV. He spent the spring semester of his junior year studying abroad in France.

Wang lives in Ningbo, China, and graduated from Hwa Chong Institution. An A.B. candidate, he is a mathematics major and is pursuing a certificate in applications of computing.

For his freshman year, he received the Freshman First Honor Prize and the Shapiro Prize for Academic Excellence.

Wang's research interest is in number theory, and he is writing his senior thesis on elliptic curves. This summer, he participated in a research experience for undergraduates on matrix analysis at the College of William and Mary's mathematics department. He studied at the University of Oxford during the spring term of his sophomore year.

A member of Whitman College, he is a board member of the Association of Chinese Students and Scholars and has helped organize the Princeton University Math Competition for high school students.