The accomplishments of Princeton's students were celebrated with the awarding of four undergraduate prizes at Opening Exercises Sept. 7. 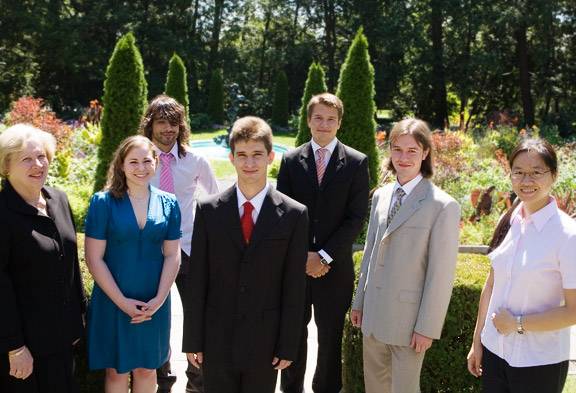 The Freshman First Honor Prize is awarded each year to a sophomore in recognition of exceptional achievement during the freshman year. This year, the prize was shared by Oguzhan Atay and Qingzhen (Sophie) Wang.

Atay lives in Bafra/Samsun, Turkey. He graduated as valedictorian of Koc Ozel Lisesi in Istanbul. Next month, he will receive the Shapiro Prize for Academic Excellence for his freshman year.

Atay plans to pursue a concentration in molecular biology along with certificates in quantitative and computational biology, biophysics and applications of computing. He is conducting independent research in the laboratory of Jacques Fresco, the Damon B. Pfeiffer Professor in the Life Sciences.

This past summer, Atay was a member of the Istanbul team in the International Genetically Engineered Machines synthetic biology competition, in which participants use standard biological parts to engineer biological systems. He lives in Wilson College.

Wang, who comes from Suzhou, China, is a graduate of Mahindra United World College of India. Next month she, too, will receive the Shapiro Prize for Academic Excellence for her freshman year.

For her concentration, Wang is considering operations research and financial engineering or physics. She also may apply for the certificate program in the Woodrow Wilson School of Public and International Affairs.

Wang has been active in the Student Volunteers Council, serving as project coordinator for the Loaves and Fishes Program and as co-leader of the spring break trip to the New York Service Opportunities Project. She also participates in the International Relations Council and the Badminton Club. This past summer, she worked for the China Red Cross Society in earthquake relief and interned at a Chinese venture capital fund. She is training this fall to be a residential college computing consultant. She lives in Forbes College.

Bogdan Stoica received this year's George B. Wood Legacy Sophomore Prize, presented each year to a member of the junior class in recognition of exceptional academic achievement during the sophomore year.

An A.B. candidate, Stoica is concentrating in physics and also may pursue a certificate in applied and computational mathematics. His research interests are in electrodynamics, quantum mechanics and general relativity. He received a Kusaka Memorial Prize in Physics and, this summer, worked as a Joseph Henry Summer Intern in Physics for Lyman Page, the Henry De Wolf Smyth Professor of Physics. His work entailed building the cooling system for a helium compressor that will be part of a microwave telescope in Chile used to study cosmic microwave background radiation.

Stoica participates in the Romanian Students and Scholars Association and the Princeton Society of Physics Students. He is a member of Whitman College.

The recipient of this year's George B. Wood Legacy Junior Prize was Simion Filip. The award is given to a member of the senior class in recognition of exceptional academic achievement during the junior year.

An A.B. candidate, Filip is concentrating in mathematics, a subject he studied in the spring of his sophomore year at the Independent University of Moscow. At Princeton, Filip won the Shapiro Prize for Academic Excellence for his sophomore year and the Andrew H. Brown Prize for outstanding junior work in mathematics. In the summers of 2007 and 2008, he won first prize at the International Mathematics Competitions in Bulgaria.

Filip's research interests in mathematics lie in areas with applications to mathematical physics, in particular, ergodic theory and algebraic geometry. His senior thesis will likely focus on questions about the ergodic theory of moduli spaces of Riemann surfaces.

Last year, Filip took 13 courses, including seven graduate seminars. Outside the classroom, he is interested in yoga and rock climbing. He is a member of Forbes College.

After graduation, Filip hopes to pursue a Ph.D. in mathematics, with the long-run goal of becoming a research mathematician.

This year's Class of 1939 Princeton Scholar Award is shared by Susan Butler and Holger Staude. The award is given to the undergraduate who, at the end of the junior year, has achieved the highest academic standing for all preceding college work at the University.

Butler lives in Bradenton, Fla., where she graduated from St. Stephen's Episcopal School. An A.B. candidate, she is concentrating in economics and pursuing a certificate in finance. She won the Shapiro Prize for Academic Excellence for her freshman and sophomore years and was also awarded the Quin Morton '36 Writing Seminar Essay Prize.

In her freshman and sophomore years, Butler served as an arts chair on the Wilson College Council. Beginning in her junior year, she has served as an economics tutor in the McGraw Center for Teaching and Learning and as an elected member of the Undergraduate Liaison Committee in the Department of Economics. This year she will be a peer adviser in Wilson College.

In the summer after her sophomore year, Butler received a Louis Rukeyser '54 Summer Research Grant to do research with Avinash Dixit, the John J.F. Sherrerd '52 University Professor of Economics. This past summer she worked as an analyst at the Princeton University Investment Co.

Butler plans to write a theoretical senior thesis in the same area of game theory that she wrote her junior paper, this time focusing more specifically on the role of financial intermediaries. After graduation, she plans to work in a finance-related job, most likely in institutional investing.

Staude lives in Frankfurt, Germany, and is a graduate of the United World College of the Atlantic in Llantwit Major, Wales. An A.B. candidate, he, too, is concentrating in economics and pursuing a certificate in finance. In addition, he is pursuing certificates in musical performance (piano) and environmental studies. Staude, too, has twice won the Shapiro Prize for Academic Excellence. Last year, he was the co-winner of the George B. Wood Legacy Sophomore Prize.

Staude's research interests are in development and environmental economics. In his junior paper, he compared the effectiveness of different modes of delivery for food aid. In his senior thesis, he will study the impact of environmental legislation that creates markets for pollution (such as the Kyoto Protocol) on shareholder value.

Holger is a cast member of L'Atelier, the French theater workshop at Princeton. He has presented several piano performances in Taplin and Richardson auditoriums in the past year, and has played the piano for the Princeton University Players musical theater production of "The Flood." Holger is a member of Whitman College.

This summer, Holger worked with the Goldman Sachs Special Situations Group in New York City. After graduation he may go to graduate school in economics, or he may go back to Goldman Sachs to work with the private equity group where he was employed this summer. Or, there's a chance he may take a year off to attend drama conservatory in Paris.