The accomplishments of Princeton's students were celebrated with the awarding of four undergraduate prizes at Opening Exercises Sept. 13.

"Among the qualities that matter to us at Princeton, none are more important than intellectual engagement and academic achievement," said Dean of the College Nancy Malkiel. "It is especially fitting, therefore, that we begin the academic year by honoring a select group of undergraduates for extraordinary accomplishment in their programs of study." 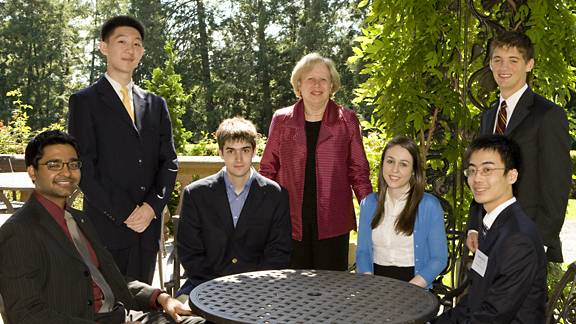 The Freshman First Honor Prize is awarded each year to a sophomore in recognition of exceptional achievement during the freshman year. This year, the prize was awarded to Tengyao Wang.

Wang lives in Ningbo, China. He graduated from the Hwa Chong Junior College in Singapore, where he won gold medals in the Singapore chemistry, physics, informatics and mathematics olympiads during his high school career.

An A.B. candidate, Wang is planning to pursue a concentration in mathematics and a certificate in applications of computing. Last year he received honorable mention in the Putnam Mathematical Competition. Next month he will receive the Shapiro Prize for Academic Excellence for his freshman year.

A resident of Whitman College, Wang is part of the technical support team for the newly established Princeton Chinese Theater. He is also a member of the bridge club.

Mohit Agrawal received this year's George B. Wood Legacy Sophomore Prize, presented each year to a member of the junior class in recognition of exceptional academic achievement during the sophomore year.

His research interests are in applications of stochastic systems, for example in game theory and weather forecasting. Agrawal won the Shapiro Prize for Academic Excellence for his freshman and sophomore years. After graduation, he plans to go to graduate school and complete a doctorate in either economics or applied mathematics.

This summer, Agrawal traveled to Ghana after receiving one of the University's Martin Dale Summer Awards. He established a youth newspaper with senior secondary school students from Ashaiman, a large urban slum between Accra and Tema. He also led an Engineers Without Borders team from Princeton, which designed and built a community library at a school in Ashaiman. He won an IEEE Gold Humanitarian Award to support the technology costs of the project.

Agrawal has co-chaired the Butler College Council for the last three semesters. He also serves as the academic chair for the South Asian Students Association, organizing speakers and events on South Asian issues; he co-organized the 2009 South Asian Dance Dimensions competition on campus.

The George B. Wood Legacy Junior Prize is given to a member of the senior class in recognition of exceptional academic achievement during the junior year. This year, the prize is shared by George Boxer and Yu (Evans) Xiang.

Boxer lives in Stanford, Calif. He is a graduate of Henry M. Gunn Senior High School in Palo Alto.

An A.B. candidate, Boxer is concentrating in mathematics. He won the Shapiro Prize for Academic Excellence for his sophomore year and the Andrew H. Brown Prize for outstanding junior work in mathematics. He also received honorable mention in the Putnam Mathematical Competition. This summer, he participated in a Research Experience for Undergraduates in number theory at the University of Wisconsin. He hopes that his work there will yield two publishable articles.

Boxer's general research interests in mathematics lie in number theory and algebraic geometry -- more specifically automorphic forms, Galois representations and arithmetic algebraic geometry. He plans to explore one of these areas in his senior thesis.

Boxer is a member of Wilson College. After graduation, he intends to pursue a Ph.D. in pure mathematics, with the long-run goal of becoming a professor of mathematics.

Xiang lives in Centreville, Va., and is a graduate of the Thomas Jefferson High School for Science and Technology in Alexandria, Va. He was born in Beijing and immigrated to the United States when he was 11 years old.

A BSE candidate, Xiang is concentrating in operations research and financial engineering and pursuing certificates in applied and computational mathematics, finance and applications of computing. He spent the summer working at Two Sigma Investments, a quantitative hedge fund in New York City.

Xiang's research interests are in probability theory and statistics, especially theory of stochastic processes, robust parameter estimation and their applications to economics and finance. In his junior year, he did independent work on an optimal stopping problem involving nonhomogeneous Poisson processes. For his senior thesis, he plans to study stochastic volatility models and their applications to options pricing and hedging.

Xiang is a member of Tau Beta Pi engineering honor society. He is a resident of Mathey College, where as a peer tutor, he helps students with mathematics and operations research and financial engineering courses.

Following graduation, he would like either to embark on a career in quantitative finance or pursue a Ph.D. in applied mathematics or statistics.

This year's Class of 1939 Princeton Scholar Award is shared by Danielle Rochlin and David Karp. The award is given to the undergraduate who, at the end of the junior year, has achieved the highest academic standing for all preceding college work at the University.

Rochlin lives in Pacific Palisades, Calif., and is a graduate of Palisades Charter High School. An A.B. candidate, she is concentrating in molecular biology and pursuing a certificate in the Woodrow Wilson School of Public and International Affairs. She won the Shapiro Prize for Academic Excellence for her freshman and sophomore years and was named an Adel Mahmoud Global Health Scholar.

Rochlin is writing her senior thesis on vaccination against meningococcal meningitis. This summer, as a Global Health Scholar, she conducted thesis research at various European organizations and institutions, including Novartis Vaccines, the London Department of Health, the World Health Organization and the Meningitis Vaccine Project. After graduation, she is planning to attend medical school.

A resident of Forbes College, Rochlin is a student member of the Faculty Committee on the Course of Study, an officer of the Princeton Model Congress, an Orange Key tour guide and a coordinator for the Community Action program.

Karp lives in Berwyn, Pa., and is a graduate of Conestoga High School. A BSE candidate, he is concentrating in mechanical and aerospace engineering and pursuing certificates in applied and computational mathematics and in finance. He also has twice won the Shapiro Prize for Academic Excellence.

This summer Karp analyzed wind tunnel data in his job in the aeromechanics branch of the NASA Ames Research Center at Moffett Field, Calif. After graduation he may pursue a Ph.D. in aerospace engineering, or he may go directly into industry as an engineer. He is a member of Tau Beta Pi engineering honor society.

Karp is a sports writer for The Daily Princetonian student newspaper and a participant in intramural sports. Since freshman year, he has managed and captained an independent team that competes in broomball, floor hockey and team handball. He also has played those sports, along with flag football, softball, kickball and dodgeball for his residential college, Butler, and his eating club, the Princeton Charter Club. He is currently treasurer of Charter Club.