The accomplishments of Princeton's students were celebrated with the awarding of four undergraduate prizes at Opening Exercises Sept. 16. 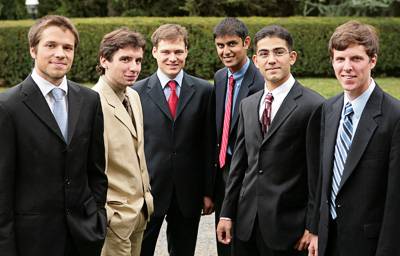 Andrei Bogdan Ungureanu of Drobeta Turnu Severin, Romania, received the Freshman First Honor Prize, awarded each year to a sophomore in recognition of exceptional achievement during the freshman year.

A graduate of Colegiul National "Traian," Ungureanu is an A.B. candidate who plans to major in mathematics and complete certificates in finance and in applied and computational mathematics. He participated in three International Mathematical Olympiads as a member of the Romanian Mathematical Olympiad team, winning gold medals in 2006 and 2005 and a silver medal in 2004.

During his first year at Princeton, Ungureanu placed in the Top 25 of the Putnam Undergraduate Mathematics Competition and received a book award from the German department recognizing "outstanding achievement in the study of German language and literature" as the best student in German 107. Next month, he will receive the Shapiro Prize for Academic Excellence.

The George B. Wood Legacy Sophomore Prize is presented each year to a member of the junior class in recognition of exceptional academic achievement during the sophomore year. This year, the prize was shared by Anant Kumar and Holger Jens Staude.

Kumar lives in Bethesda, Md., and is a graduate of the Sidwell Friends School in Washington, D.C. An A.B. candidate, he is majoring in the Department of Slavic Languages and Literatures and plans to complete certificates in finance, Russian and Eurasian studies, and Russian language and culture.

This past summer, Kumar studied Russian at the Nevsky Institute of Language and Culture in St. Petersburg, Russia, as part of the Princeton-in-Petersburg program. Next month, he will receive the Shapiro Prize for Academic Excellence.

Staude lives in Frankfurt, Germany, and is a graduate of the United World College of the Atlantic in Llantwit Major, Wales. An A.B. candidate, he is majoring in the Department of Economics and plans to complete certificates in musical performance (piano), finance and environmental studies.

Staude's research interests are in development and environmental economics. He plans to focus his research on the economic and environmental challenges faced by rural societies in central Africa. Next month, he will receive the Shapiro Prize for Academic Excellence for the second time.

Staude has been active as a chamber musician on campus, performing with members of the Graduate Music Society at events such as the Frist Lunchtime Concert Series. He also is a member of L'Atelier, the French theater workshop.

This year's George B. Wood Legacy Junior Prize is shared by Samuel Fallon and Andrei Negut. The award is given to a member of the senior class in recognition of exceptional academic achievement during the junior year.

Fallon is a graduate of St. Joseph's High School in his hometown of South Bend, Ind. He is majoring in the Department of English and plans to complete a certificate in classical Greek.

Fallon's academic interest lies in Renaissance English literature, particularly in the influence of classical texts and ideas on Renaissance writers and in early modern poetics. He plans to write his senior thesis on Philip Sidney's "Arcadia" and on George Chapman's translations of the "Iliad" and the "Odyssey," exploring their answers to the questions of what an epic work of literature should do and how it should communicate itself to its audience.

Fallon is a residential college adviser in Mathey College and a Writing Center fellow. He is also the intramurals chair of Tower Club. Following graduation, he plans to pursue graduate studies in English with the goal of becoming a college professor.

Negut is a graduate of Colegiul National "Tudor Vianu" in his hometown of Bucharest, Romania. He is majoring in the Department of Mathematics and plans to complete a certificate in applied and computational mathematics. His academic interest is pure mathematics, and he will be pursuing a thesis in algebraic geometry this year.

Last year Negut was a recipient of the George B. Wood Legacy Sophomore Prize, the Shapiro Prize for Academic Excellence and the Andrew H. Brown Prize in Mathematics, for the outstanding junior or juniors in mathematics. In a national competition, he was awarded a Josephine DeKármán Fellowship for 2007-08.

Following graduation, Negut plans to attend graduate school in mathematics in preparation for a career as a college professor of pure mathematics.

Amirali Modir Shanechi is this year's recipient of the Class of 1939 Princeton Scholar Award, given to the undergraduate who, at the end of the junior year, has achieved the highest academic standing for all preceding college work at the University.

Shanechi and his family immigrated to Canada from Iran in the summer of 2001. He currently lives in Toronto, Ontario, where he graduated from the Don Mills Collegiate Institute. A B.S.E. candidate, he is concentrating in the Department of Electrical Engineering and pursuing certificates in engineering physics, applied and computational mathematics, and applications of computing.

Shanechi's current research interests are in engineering and medicine. In his independent work this year, he expects to focus on the use of quantum cascade lasers to detect the presence and levels of carbon dioxide or other toxins in a patient's blood.

As a member of the Canadian Physics Olympiad team, Shanechi participated in two International Physics Olympiads, winning a gold medal in 2004 and a silver medal in 2003. He received the Freshman First Honor Prize, was twice awarded the Shapiro Prize for Academic Excellence, and has been elected to the Tau Beta Pi engineering honor society.

For the past two years Shanechi has served as a peer tutor and as a lab teaching assistant for an electrical engineering course. As a member of Tau Beta Pi, he has given tours of the School of Engineering and Applied Science.

Following graduation, Shanechi intends to attend either medical school or graduate school in biomedicine or bioengineering. His long-term plan is to do medical-related research.