At left: Honored for their academic achievements were (from left) Glen Weyl, Tamara Broderick, Wei Ho and Zachary Squire. (Not pictured: Andrei Negut)

The accomplishments of Princeton's students were celebrated with the awarding of four undergraduate prizes at Opening Exercises Sept. 10. 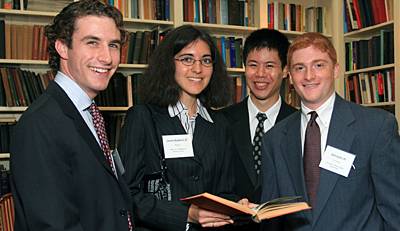 Wei Ho of Chamblee, Ga., received the Freshman First Honor Prize, awarded each year to a sophomore in recognition of exceptional achievement during the freshman year.

Ho, who immigrated with his family from Taiwan when he was entering third grade, is a graduate of Chamblee Charter High School. He has received a writing award in the Arts Recognition and Talent Search sponsored by the National Foundation for Advancement in the Arts. In addition, he twice represented Georgia in the American Regions Math League competition, participated in the Governor's Honors Program and attended the Michigan National Debate Institute Classic debate camp.

A B.S.E. candidate, Ho is majoring in computer science. Next month, he will receive the Shapiro Prize for Academic Excellence. He serves as the Webmaster for the University's Chinese Students Association.

The George B. Wood Legacy Sophomore Prize is presented each year to a member of the junior class in recognition of exceptional academic achievement during the sophomore year. This year, the prize was shared by Andrei Negut and Zachary Squire.

Negut lives in Bucharest, Romania, and is a graduate of Colegiul National "Tudor Vianu" in Bucharest. An A.B. candidate, he is majoring in mathematics and plans to complete a certificate in applied and computational mathematics.

A member of the Romanian Mathematical Olympiad team, Negut has won medals in three International Mathematics Olympiads and in four Balkan Mathematics Olympiads. Since coming to Princeton, he has participated in two Putnam Undergraduate Math Competitions, placing in the top 15 in 2004 and in the top 25 in 2005. He also has participated in two International Math Competitions for Undergraduates, receiving the grand first prize in 2005 and first prize in 2006.

Next month, Negut will receive the Shapiro Prize for Academic Excellence. After graduation, he plans to attend graduate school in mathematics and then pursue a career as a researcher or college professor.

Squire lives in New York City. He is a graduate of the Collegiate School, where he served as president of the student body and as an elected leader in several other extracurricular activities. An A.B. candidate, he is majoring in classics.

Before coming to Princeton, Squire earned first place in the Cicero Division of the New York Classical Club Annual Latin Sight Translation Contest and a Silver Key for Excellence in Writing in the Columbia University Scholastic Art and Writing Awards Competition. He also participated in the Princeton Humanities Symposium in fall 2004.

At Princeton, Squire has received the Quin Morton '36 Writing Seminar Essay Prize and the classics department's Stinnecke Prize. Next month, he will receive the Shapiro Prize for Academic Excellence for the second time.

Squire is active in the Undergraduate Student Government, serving as chair of the Campus and Community Affairs Business Subcommittee and as the public safety and governance liaison of the Undergraduate Life Committee.

This year's George B. Wood Legacy Junior Prize went to Glen Weyl, a graduate of Choate Rosemary Hall in Wallingford, Conn. The award is given to a member of the senior class in recognition of exceptional academic achievement during the junior year.

Weyl, who is from Los Altos Hills, Calif., is an A.B. candidate majoring in economics.  He plans to complete certificates in finance and in applied and computational mathematics. His research interests are focused on applied microeconomic theory as well as on the intersection between economics and other disciplines, particularly computer science, neuroscience, philosophy, psychology and political science. He expects to write his senior thesis on issues in two-sided markets and the payments card industry. This fall Weyl will be presenting his work at the Ph.D. research seminar at Princeton's Bendheim Center for Finance and at a seminar he has been invited to give in Toulouse, France.

Weyl has twice received the Shapiro Prize for Academic Excellence, and also has been awarded the Quin Morton '36 Writing Seminar Essay Prize, the Daily Princetonian Arts Writing Award, the Walter E. Hope '01 Memorial Freshman Debating Prize, the Walter E. Hope '01 Extemporaneous Speaking Prize and the Spencer Trask Medal as the best freshman debater. He also has earned several national scholarships, including the Josephine DeKármán Fellowship, the Humane Studies Fellowship, a Merit Scholarship from the National Scholars Honors Society and a Merit Award from the National Society of Collegiate Scholars.

Weyl founded and was president of the Latin American Studies Student Organization and Princeton Against Protectionism, served as a food and film critic of The Daily Princetonian and was a member of the Debate Panel. He is an undergraduate fellow and peer adviser at Forbes College and an undergraduate fellow at the James Madison Program, the Princeton Institute for International and Regional Studies and the Human Values Forum. He also has served as a referee for the Quarterly Journal of Economics and as a tutor in math, physics, computer science and economics.

Following graduation, Weyl plans to attend graduate school in economics. By the end of his senior year, he expects to have completed all of the courses and general exams that would be required for a Ph.D. in economics at Princeton. He aspires to become an academic economist.

Tamara Broderick is this year's recipient of the Class of 1939 Princeton Scholar Award, given to the undergraduate who, at the end of the junior year, has achieved the highest academic standing for all preceding college work at the University.

Broderick, who lives in Parma, Ohio, is a graduate of the Laurel School in Shaker Heights, Ohio. An A.B. candidate, she is majoring in mathematics and plans to complete certificates in applied and computational mathematics and in applications of computing. Her research interests include machine learning, which she expects will be the focus of her senior thesis. One of her junior papers used machine learning techniques to determine the movement patterns of animals on Panama's Barro Colorado Island from radio telemetry data.

She is co-president of the Math Club and has been active in Princeton Engineering Education for Kids, a program through which undergraduates visit elementary schools and teach children basic principles of engineering using Lego toys. She was an undergraduate fellow last year at Mathey College and will be an peer adviser there this year. An avid runner, she has served as a leader for Outdoor Action, Princeton's wilderness orientation program.

After graduation, Broderick plans to attend graduate school in mathematics, statistics or machine learning in preparation for a career as a college professor.