The accomplishments of Princeton's students were celebrated with the awarding of four undergraduate prizes at Opening Exercises Sept. 11.

"Among the qualities that matter to us at Princeton, none is more important than intellectual engagement and academic achievement," said Dean of the College Nancy Malkiel. "It is especially fitting that we begin the academic year by honoring a select group of undergraduates for extraordinary accomplishment in their programs of study." 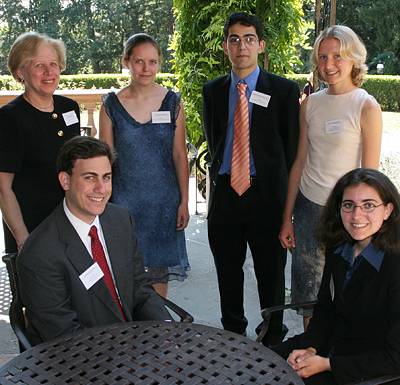 Amirali Shanechi of Toronto, Ontario, received the Freshman First Honor Prize, awarded each year to a sophomore in recognition of exceptional achievement during the freshman year.

Shanechi, who immigrated with his family to Canada from Iran in 2001, is a graduate of Don Mills Collegiate Institute in North York, Ontario. He has participated in two International Physics Olympiads as a member of the Canadian team, winning a silver medal in 2003 and a gold medal in 2004.

A B.S.E. candidate at Princeton, he is majoring in electrical engineering and pursuing certificates in engineering physics, applied and computational mathematics, and applications of computing. Later this month, he will receive the Shapiro Prize for Academic Excellence.

This year's George B. Wood Legacy Sophomore Prize went to Tamara Broderick, a graduate of the Laurel School in Shaker Heights, Ohio. The award is given to a member of the junior class in recognition of exceptional academic achievement during the sophomore year.

Broderick, who lives in Parma, Ohio, is an A.B. candidate majoring in mathematics. She also plans to complete a certificate in applications of computing. Since coming to Princeton, she has received the Quin Morton '36 Writing Seminar Essay Prize, the Manfred Pyka Memorial Physics Prize and the Eugene Taylor Prize in Physics. Later this month, she will receive the Shapiro Prize for Academic Excellence for the second time.

Broderick has conducted research in astrophysics since high school, when she contributed to a paper that was published in the Astrophysics Journal. She spent the summer of 2004 at Princeton working on a gravitational lensing problem. This past summer, she worked for the National Security Administration in the Director's Summer Program. After graduation, she intends to go to graduate school in preparation for a career as a college professor.

Broderick is a leader in Outdoor Action, Princeton's wilderness orientation program, and a member of both the math club and Princeton Engineering Education for Kids (PEEK), a program through which undergraduates visit elementary schools and teach children basic principles of engineering using Lego toys.

The George B. Wood Legacy Junior Prize is presented each year to a member of the senior class in recognition of exceptional academic achievement during the junior year. This year, the prize was shared by Joshua Brodie and Jessica Gasiorek.

Brodie, who is from New York City, is a graduate of the Horace Mann School in Riverdale, N.Y. An A.B. candidate, he is majoring in mathematics and completing certificates in finance and in applied and computational mathematics.

Brodie is interested in the more theoretical side of applied mathematics -- the fundamental underpinnings of applied techniques. He received the Shapiro Prize for Academic Excellence for his freshman year. He is exploring graduate school options and looking into possible careers in finance.

As one of two editors of the opinion page of Princeton's student newspaper, The Daily Princetonian, Brodie coordinates content and works with the editorial board to research and write staff editorials.

Gasiorek is a graduate of Palo Alto Senior High School in her hometown of Palo Alto, Calif. An A.B. candidate, she is majoring in French and Italian and is most interested in the study of the two languages rather than their literatures.

Gasiorek twice has received the Shapiro Prize for Academic Excellence and was awarded the R. Percy Alden Memorial Prize in French. Following graduation, she hopes to pursue a career in publishing or communications as an editor or translator. Last summer, she worked at a translation company in Paris through the Princeton-in-France program.

Gasiorek played club badminton for two years and served as club president in her sophomore year. This year, she is a peer adviser in Rockefeller College.

Catherine Kunkel is this year's recipient of the Class of 1939 Princeton Scholar Award, given to the undergraduate who, at the end of the junior year, has achieved the highest academic standing for all preceding college work at the University.

Kunkel, who lives in Woodstock, Md., is a graduate of Mount Hebron High School in Ellicott City, Md. An A.B. candidate, she is majoring in physics. She has been named a 2005 Morris K. Udall Scholar for her academic achievement, leadership potential and commitment to pursuing a career in the environment. At Princeton she twice has received the Shapiro Prize for Academic Excellence, and also has been awarded the Manfred Pyka Memorial Physics Prize, the Kusaka Memorial Prize in Physics and the Eugene Taylor Prize in Physics.

Kunkel's research interests include geophysics and energy and climate policy. For her senior thesis, she will be working at the Geophysical Fluid Dynamics Laboratory to model tsunamis. Her future plans include earning a Ph.D. in physics and pursuing a career in environmental policy.