Princeton celebrated the accomplishments of its students with the awarding of four undergraduate prizes at Opening Exercises Sunday, Sept. 9. 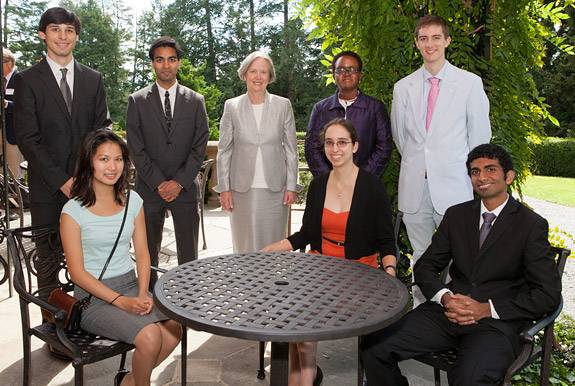 Krysta Dummit received the Freshman First Honor Prize, which is awarded each year to a sophomore in recognition of exceptional academic achievement during freshman year.

Dummit lives in Shelburne, Vt., and graduated from Champlain High School. She plans to major in chemistry, molecular biology or computer science, and is considering a certificate in quantitative and computational biology. She is also enrolled in the Integrated Science Curriculum. Dummit is a recipient of the Manfred Pyka Memorial Prize in Physics.

This summer, Dummit worked in the laboratory of David Botstein, Princeton's Anthony B. Evnin '62 Professor of Genomics and director of the Lewis-Sigler Institute for Integrative Genomics. She analyzed genomic data.

The George B. Wood Legacy Sophomore Prize is presented each year to a member of the junior class in recognition of exceptional academic achievement during the sophomore year. This year, the prize is shared by Samuel Mumford and Robert Yates.

Mumford lives in Westfield, N.J., and attended Westfield High School. A Bachelor of Arts candidate, Mumford is a physics major and is considering a certificate in Near Eastern studies or medieval studies. He is a recipient of the Kusaka Memorial Prize in Physics.

His research interests include cosmology and string theory. After graduation, he plans to pursue graduate study in physics and a career of research and teaching in academia.

This summer, Mumford worked in the lab of physics professor Suzanne Staggs, assisting in research on measurements of the cosmic microwave background radiation in the universe.

Mumford is an Outdoor Action leader, co-founder and treasurer of the Princeton Sports Industry Club, and an avid intramural sports participant.

Yates lives in Sutton, Mass., and graduated from Mount Saint Charles Academy in Rhode Island. An A.B. candidate, Yates is a sociology major pursuing certificates in urban studies and values and public life.

His research interests include the interplay among urban culture, the informal patterns and illegal activity in everyday metropolitan life, and the structural conditions that are imposed on cities. More broadly, Yates is interested in cities and the social, political, economic and legal power dynamics that exist in and around them.

This summer, Yates interned with the social entrepreneurship organization Ashoka in Bangalore, India, through Princeton's International Internship Program. As part of a team focused on affordable housing in India, Yates collaborated with teams in Brazil and Colombia to devise a strategy for home construction and improvement in India.

Yates is an editor with the student newspaper The Daily Princetonian, a leader in the Breakout Princeton civic action trip program, a residential college adviser in Wilson College, an officer of Princeton Model Congress, and a member of the Undergraduate Student Government Social Committee and Princeton Entrepreneurship Club.

This year's George B. Wood Legacy Junior Prize is shared by Taman Narayan and Stephanie Tam. The prize is given to a member of the senior class in recognition of exceptional academic achievement during the junior year.

Narayan lives in San Jose, Calif., and attended Leland High School. An A.B. candidate, he is an economics major pursuing a certificate in applied and computational mathematics. Last fall, he was awarded the Shapiro Prize for Academic Excellence.

Narayan has served as editor-in-chief of the University's American Foreign Policy magazine, program coordinator for the Trenton Interactive Education Service project, a member of the governing council of the American Whig-Cliosophic Society, a member of the Princeton Debate Panel and a peer tutor.

Tam's research centers on an international and comparative approach to literature that places different cultures in dialogue with each other. She wrote her junior papers on slavery and sexism in Henry David Thoreau's "Walden" and Maxine Hong Kingston's "The Woman Warrior," and political identity in Salman Rushdie's "Midnight's Children." Her senior thesis will focus on elements of postcolonialism, fantasy and trauma in the work of J.R.R. Tolkien. She plans to pursue graduate study in English and a career in writing and teaching at the university level.

This summer, Tam participated in the Princeton/Bread Loaf Fellowship, a research training and advising initiative at the Bread Loaf School of English at the University of Oxford, taking a graduate seminar and conducting research for her thesis.

Outside the classroom, Tam has served as editor in chief of the Nassau Literary Review, an adviser for Princeton Against Sex Trafficking, a fellow of the Behrman Undergraduate Society of Fellows, a student representative of the English department's student advisory council, a peer advisor in Mathey College, a board member of the Writers Studio, and a outreach team member and mentor in Princeton Faith and Action.

This Class of 1939 Princeton Scholar Award is given to the undergraduate who, at the end of the junior year, has achieved the highest academic standing for all preceding college work at the University. This year, the award is shared by Aman Sinha and Juanhe Tan.

Sinha lives in Ivyland, Pa., and is a Bachelor of Science in Engineering candidate in mechanical and aerospace engineering. He is also pursuing certificates in applications of computing and applied and computational mathematics. He has received the George B. Wood Legacy Sophomore Prize and the Barry M. Goldwater Scholarship.

Sinha's research interests are computational and statistical modeling techniques as they relate to the evolution of dynamical systems and other data flows. His senior thesis, which combines control theory with machine learning, focuses on how to provide robust and intelligent control to a dynamical system under certainty. He plans to attend graduate school and pursue a career in information engineering and data analytics research.

Sinha is the president of Princeton's chapter of the engineering honor society Tau Beta Pi, plays alto saxophone for the South Asian music group Princeton Tarana and serves as a peer tutor in Whitman College.

Tan lives in Singapore and is an A.B. candidate in mathematics, pursuing a certificate in East Asian studies. Last fall, he received the Shapiro Prize for Academic Excellence.

Tan's research interests span overlapping areas in mathematics and philosophy, such as logic and the philosophy of mathematics, as well as algebra, number theory, epistemology and meta-ethics. He is also interested in East Asian film and language. He plans to focus his senior thesis on logic, the foundations of mathematics or algebraic number theory.

This summer, he studied abroad in Kyoto, Japan, taking a six-week course in advanced Japanese at Doshisha University. He also attended the three-week Colorado Summer Seminar in Philosophy at the University of Colorado-Boulder, and assisted with Princeton's International Orientation.

Tan serves on the Committee on Undergraduate Admissions and Financial Aid, as treasurer of the East Asian music group Vtone, and as a peer tutor and peer academic adviser in Mathey College. He has also been a member of the Sympoh Urban Arts Crew and artistic director of the Princeton Chinese Theatre.

After graduation, Tan has committed to serve one and a half years in Singapore's military and six years in civil service, preferably in public policy. He hopes to continue to work as a civil servant after that period.