Princeton University recognized the accomplishments of its students with the awarding of four undergraduate prizes at Opening Exercises on Sunday, Sept. 11.

"We are proud of this year's prize winners and pleased to celebrate their commitment to their academics and to the Princeton community," Dean of the College Jill Dolan said. "Along with achieving high grade point averages, these distinguished students dedicate themselves to activities that reach all corners of the campus and beyond. They study internationally, belong to campus clubs, undertake competitive internships and important service work, and maintain artistic practices. I wish them the warmest of congratulations." 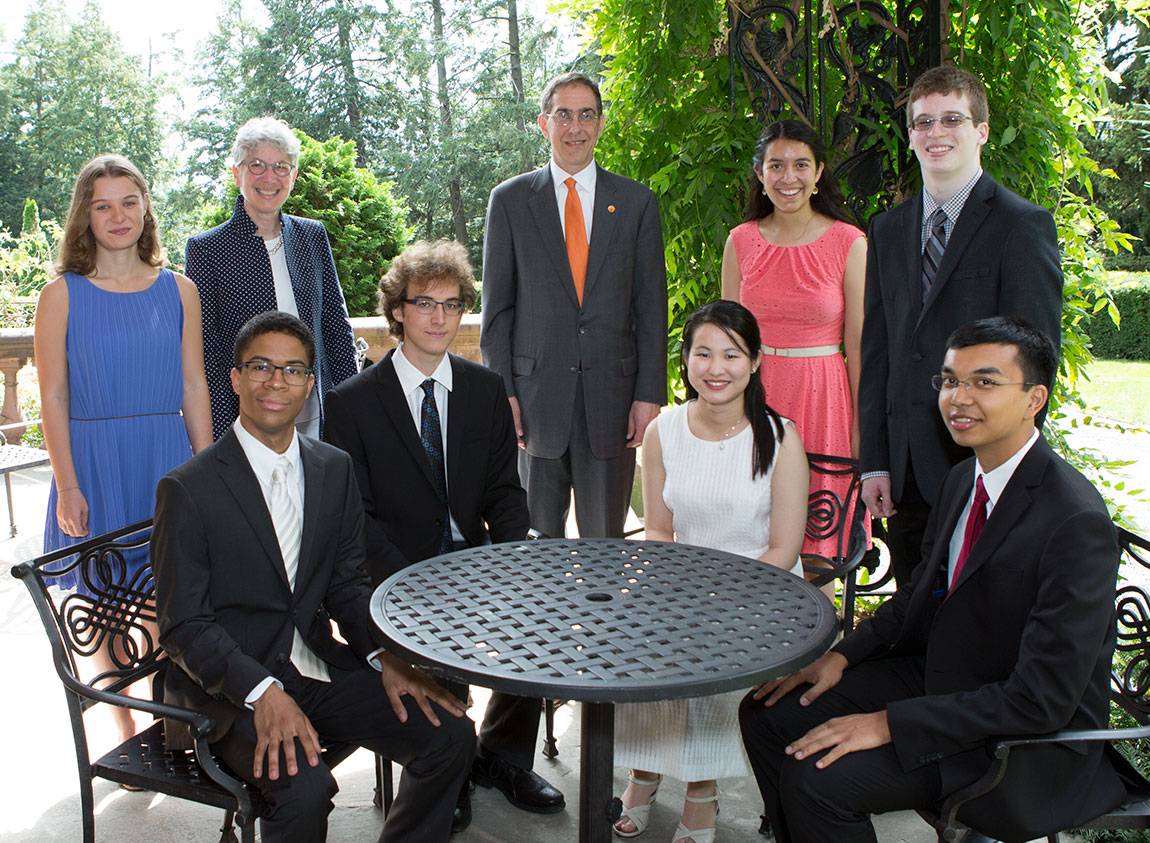 This year's Freshman First Honor Prize is shared by Bendeguz Offertaler and Matthew Tyler. The prize is awarded each year to sophomores in recognition of exceptional achievement during their first year.

Offertaler, of Rockville, Maryland, attended Montgomery Blair High School. He plans on pursuing a major in physics and is a recipient of the Manfred Pyka Memorial Prize in Physics.

A member of Forbes College, Offertaler is a member of the Chess Club and participates in the Philosophy Table student discussion group. He spent the summer traveling in Hungary.

Tyler is from Spencerport, New York, and attended Spencerport High School. He plans on pursuing a major in mathematics and certificates in applications of computing and applied and computational mathematics.

A member of Mathey College, Tyler spent this past summer learning about German language and culture through the Department of German's Princeton-in-Munich program. He also is a member of the math club.

This year's George B. Wood Legacy Sophomore Prize is shared by Hans Hanley and Prem Nair. The prize is given to members of the junior class in recognition of exceptional academic achievement during sophomore year.

Hanley, of Windermere, Florida, attended Montverde Academy. Hanley is an electrical engineering major pursuing a certificate in applications of computing. He received the Shapiro Prize for Academic Excellence in 2015.

Hanley spent this past summer as a Google software engineering intern and he spent the previous summer participating in a National Science Foundation summer research program at Texas Tech University. He also is a member of the Institute of Electrical and Electronics Engineers. His research interest is in cybersecurity.

A member of Whitman College, Hanley is a peer tutor at the McGraw Center for Teaching and Learning, mentors high school students through the Pace Center for Civic Engagement's Princeton College Counseling Project, and has served as an undergraduate course assistant for the electrical engineering course "Contemporary Logic Design."

Nair is from Cupertino, California, and attended Monta Vista High School. He is a computer science major. He received the Shapiro Prize for Academic Excellence in 2015 and he spent this past summer as a Google software engineering intern.

On campus, Nair is a member of Mathey College and Charter Club. He is co-president of the Princeton Entrepreneurship Club and helped organize HackPrinceton events. He also was co-director for the TigerLaunch national collegiate entrepreneurship competition. His primary research interests are in advancing artificial intelligence and emerging technologies that have the potential to improve people's lives.

This year's George B. Wood Legacy Junior Prize is shared by Aslihan Asil and Marisa Salazar. The prize is given to members of the senior class in recognition of exceptional academic achievement during junior year.

Asil, of Istanbul, attended Robert College of Istanbul. She is an economics major pursuing a certificate in finance. She previously received the Shapiro Prize for Academic Excellence.

This summer, she worked as a research associate at the independent organization Committee on Capital Markets Regulation. She previously interned at the American Bar Association and the International Monetary Fund.

On campus, Asil is a member of Mathey College. She is a founding undergraduate fellow in the Julis-Rabinowitz Center for Public Policy and Finance, an undergraduate associate in the Program in Law and Public Affairs, and a member of Pre-Law Society. This year she will be an undergraduate course assistant for the Department of Economics.

Salazar was home-schooled in Las Cruces, New Mexico. She is a chemistry major and received the Department of Chemistry's William Foster Memorial Prize.

She is a member of Whitman College, where she was a residential college adviser last year and will be a peer academic adviser this year. She also is a pre-health peer adviser, a peer tutor with the McGraw Center for Teaching and Learning, a member of the Princeton Evangelical Fellowship and a past officer with the Princeton University American Sign Language Club.

Salazar spent the summer after her sophomore year participating in the International Internship Program, traveling to Bolivia to learn about the country's health care system and serve as a volunteer tutor. She hopes to attend medical school after graduation and one day work with medically underserved communities.

Lydia Liu received the Class of 1939 Princeton Scholar Award, which is awarded each year to the undergraduate who, at the end of junior year, has achieved the highest academic standing for all preceding college work at the University.

Liu is from Singapore and attended Raffles Institution. She is an operations research and financial engineering major. She also is pursuing certificates in applied and computational mathematics, applications of computing, and statistics and machine learning.

She received the Shapiro Prize for Academic Excellence in her first and sophomore years, as well as the Freshman First Honor Prize and the George B. Wood Legacy Sophomore Prize. She also received the Department of English's Bain-Swigget Poetry Prize.

A member of Forbes College, Liu is mentorship chair for Princeton Women in Computer Science and director of projects for the Princeton University Language Project. She is a member of the Tau Beta Pi engineering honor society and she helps give tours of the School of Engineering and Applied Sciences. Liu also is a member of the William Trego Singers and has served as a translator for the student-run Princeton Chinese Theater.

Liu was an intern at Microsoft Research Lab in Cambridge, United Kingdom, this past summer. After graduation, she hopes to pursue a Ph.D. in machine learning.