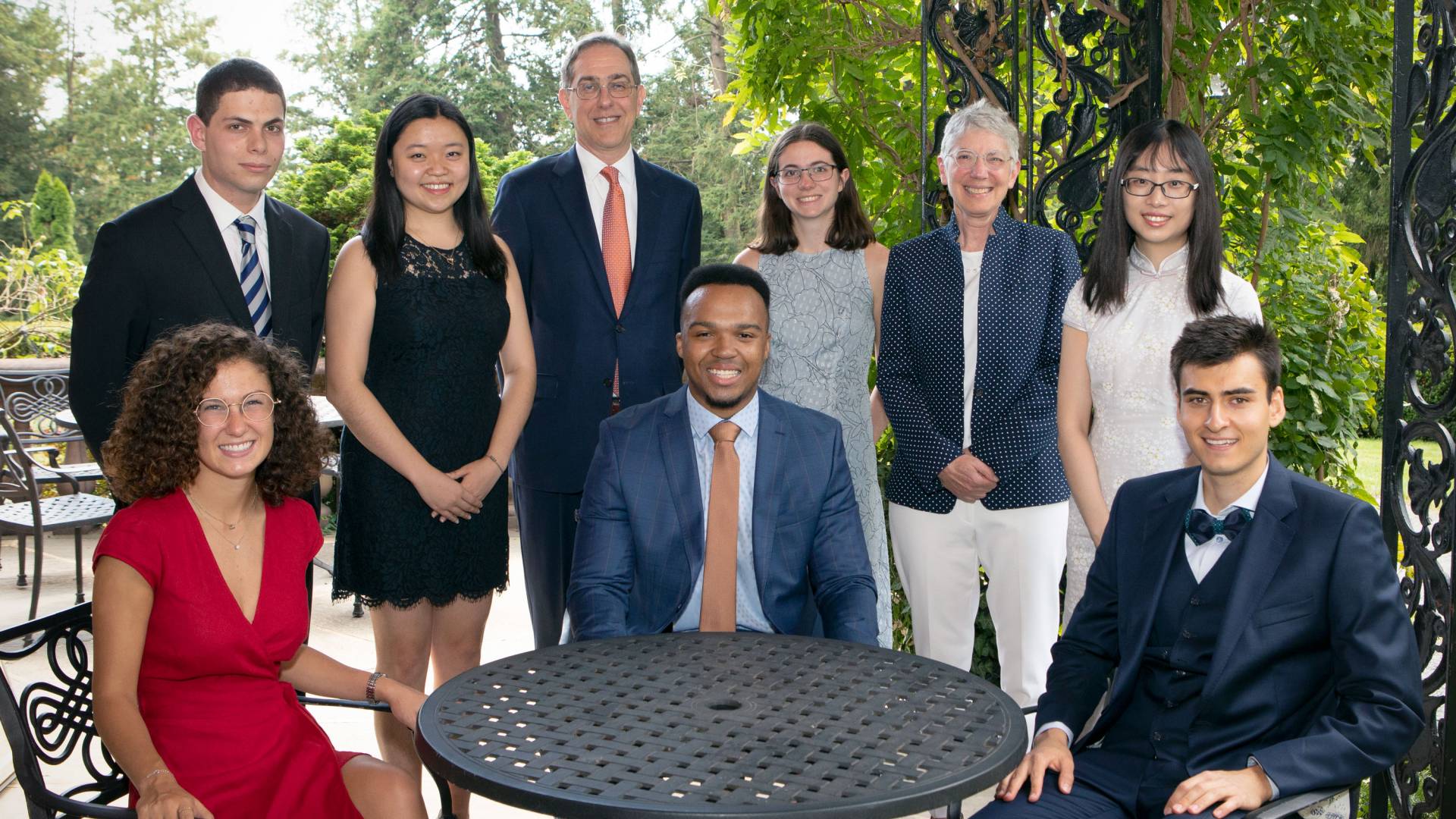 Princeton University celebrated the accomplishments of its students with the awarding of four undergraduate prizes to seven students at Opening Exercises on Sunday, Sept. 8.

“We are proud of these exemplary scholars and pleased to celebrate their academic success,” said Dean of the College Jill Dolan. “These students have achieved quite a lot academically while also contributing broadly to the Princeton community. They set a vital example for their peers across campus, not just with their abundance of extra courses and numerous A+ grades, but by the range of their intellectual and co-curricular interests. My colleagues and I are pleased with their accomplishments and proud of their commitments.”

Kiril Bangachev received this year’s Freshman First Honor Prize, which is awarded to members of the sophomore class in recognition of exceptional achievement during the first year.

Bangachev, of Sofia, Bulgaria, attended Sofia High School of Mathematics. He plans to concentrate in mathematics and is considering earning certificates in applications of computing, statistics and machine learning, and applied and computational mathematics.

Bangachev is a member of Rockefeller College. He belongs to the Mathematics Club, the Bulgarian Undergraduate Society and the Squash Club.

This past summer, he participated in the Big Data Summer Institute at the University of Michigan-Ann Arbor, where he was part of the data mining research group.

This year’s George B. Wood Legacy Sophomore Prize is shared by Mary DeVellis and Yechen Hu. The prize is awarded each year to members of the junior class in recognition of exceptional academic achievement during sophomore year.

DeVellis, a resident of Massachusetts, attended Buckingham Browne and Nichols School in Cambridge. She is an anthropology concentrator pursing certificates in gender and sexuality studies and global health.

A member of Butler College, DeVellis is co-president of Princeton Students for Reproductive Justice, an intern for the Women*s Center and a member and former treasurer of Princeton Students for Gender Equality. DeVellis also serves as an Outdoor Action leader. She is a member of the Best Buddies Club and a member and former events chair for the College Democrats.

DeVellis has held internships at Ibis Reproductive Health in Johannesburg, South Africa, and at Oxford University Clinical Research Unit in Hanoi, Vietnam, where she worked on projects related to antimicrobial resistance, community health interventions, and the nexus of quantitative and qualitative research methods as a way to solve problems in public health.

She plans to study abroad at the University of Otago in Dunedin, New Zealand, next spring.

Hu, of Shanghai, China, attended the High School Affiliated to Fudan University. She is concentrating in physics and plans to pursue certificates in biophysics and neuroscience.

Hu is a member of Rockefeller College. She is technical director of the Princeton Chinese Theater and was lighting director for the group’s last two productions. A fellow of the Princeton Writing Center, Hu is a peer reviewer for the Princeton Undergraduate Research Journal and a writer for Innovation.

Hu’s project, which focuses on how the human brain resolves competition between memories via memory differentiation, was funded through the Office of Undergraduate Research Student Initiated Internship Program.

This year’s George B. Wood Legacy Junior Prize is shared by Audrey Cheng and Eitan Levin. The prize is awarded to members of the senior class in recognition of exceptional academic achievement during junior year.

Cheng, of Palo Alto, California, attended Henry M. Gunn High School. She is concentrating in operations research and financial engineering, and is pursuing certificates in applications of computing and engineering and management systems.

Cheng is a member of Butler College, where she is a residential college adviser and a member of the Butler College Council. She is involved in several entrepreneurial groups, including the Princeton Entrepreneurship Council, for which she co-led the New York Tiger Trek in spring 2018. She is senior analyst for Tiger Capital Education, an investment club, and served as vice president of Princeton Social Innovation.

Cheng volunteers as a tutor for the Petey Green Program. She has collaborated on research with Wyatt Lloyd, assistant professor of computer science.

Levin, of Rehovot, Israel, is a graduate of Johanna Jabotinsky Youth Village, Be’er Ya’akov, Israel. He is concentrating in mathematics and pursuing a certificate in applied and computational mathematics.

A member of Whitman College, Levin is an Orange Key tour guide. He serves as an undergraduate course assistant for the Department of Mathematics and has worked with Amit Singer, professor of mathematics and the Program in Applied and Computational Science, developing algorithms for the reconstruction of molecules from cryogenic electron microscopy (cryo-EM) data.

The Class of 1939 Princeton Scholar Award, which is awarded each year to the undergraduate who, at the end of junior year, has achieved the highest academic standing for all preceding college work at the University, is shared by Nicholas Johnson and Grace Sommers.

Johnson, of Outremont, Quebec, is a graduate of Selwyn House School and attended Marianopolis College, both in Westmount, Quebec. He is an operations research and financial engineering concentrator and is pursuing certificates in statistics and machine learning, applied and computational mathematics, and applications of computing.

Johnson is a member of Whitman College, where he is a residential college adviser. He serves as a writing fellow at Princeton’s Writing Center, editor of Tortoise: A Journal of Writing Pedagogy and president of Princeton’s chapter of Tau Beta Pi. He is a member of the Princeton chapter of Engineers Without Borders and served as its co-president in 2018.

This past summer, Johnson worked as a software engineer in machine learning at Google’s California headquarters. He previously interned at Oxford University’s Integrative Computational Biology and Machine Learning Group, developing and implementing a novel optimization technique under the supervision of Aleksandr Sahakyan, principal investigator and group head. He presented the project at Princeton’s inaugural Day of Optimization in October 2018 and at the 25th Conference of African American Researchers in the Mathematical Sciences in June 2019, where his project was recognized with the Angela E. Grant Poster Award for Best Modeling.

Johnson has interned at Montreal Institute for Learning Algorithms, and he participated in Whitman’s exchange program with Morningside College at the Chinese University of Hong Kong in March 2017.

Sommers, of Bridgewater, New Jersey, attended Bridgewater-Raritan High School. She is a concentrator in physics and is pursuing certificates in applications of computing, applied and computational mathematics, and Ancient Roman language and culture.

Sommers previously received the Freshman First Honor Prize and the George B. Wood Legacy Sophomore Prize. She also was awarded a Goldwater Scholarship, an annual award for outstanding undergraduates interested in careers in mathematics, the natural sciences or engineering.

A member of Butler College, Sommers is a participant in Undergraduate Women in Physics and the Princeton Society of Physics Students. Since 2018, she has worked with the research group of Mariangela Lisanti, associate professor of physics, studying the out-of-equilibrium kinematics of a Milky Way-type galaxy.

Sommers has conducted research through a fellowship in the Program in Applied and Computational Mathematics, and she has worked under the advisement of a research group led by Roberto Car, the Ralph W. *31 Dornte Professor in Chemistry, professor of chemistry and the Princeton Institute for the Science and Technology of Materials.