Princeton University celebrated the accomplishments of its students with the awarding of four undergraduate prizes at Opening Exercises on Sunday, Sept. 13.

"We're delighted by this year's prize winners, all of whom demonstrate the best of Princeton's students," Dean of the College Jill Dolan said. "They not only sustain high grade point averages, but their interests extend well beyond their declared academic paths, into international study, service work, arts practices, and a variety of engagements in campus recreation and community. We're very proud of their work and of their University citizenship." 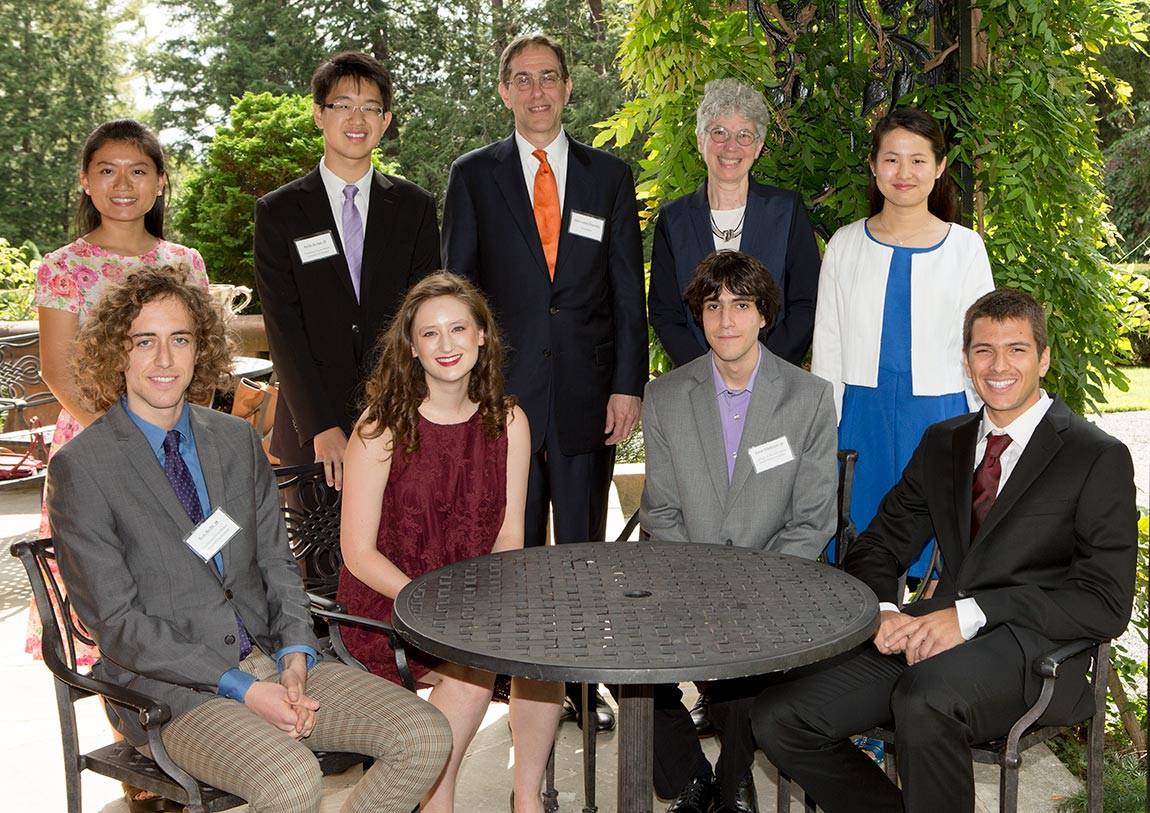 This year's Freshman First Honor Prize is shared by Kyle Berlin and Kevin Sun. The prize is awarded each year to a sophomore in recognition of exceptional achievement during freshman year.

Berlin, of Arroyo Grande, California, attended Arroyo Grande High School. He participated in the University's Bridge Year Program in Peru before starting his academic program at Princeton. Bridge Year is a tuition-free program that enables newly admitted students to begin their Princeton experience with a year of public service abroad.

This summer, Berlin participated in a PIIRS Global Seminar in Namibia taught by history professor Emmanuel Kreike, sponsored by the Princeton Institute for International and Regional Studies. For the second half of the summer he traveled in South America as a Sigmund Scholar through the Program in Latin American Studies, exploring the role the arts play in defining place.

A member of Whitman College, Berlin is involved in Theatre Intime and is a member of FuzzyDice Improve Comedy, a staff writer for the Nassau Literary Review and an Orange Key tour guide. He is on the Princeton Debate Panel and the Human Values Forum and has volunteered in programs through the Pace Center for Civic Engagement.

Sun, of Collierville, Tennessee, attended Collierville High School. He is concentrating in operations research and financial engineering and is planning on pursuing certificates in applications of computing and finance.

Sun is interested in machine learning — studying how computers can infer patterns from data. This summer, he worked in a nanophotonics laboratory at the University of Memphis.

Sun is a member Forbes College, performs with the Princeton Pianists Ensemble and is a member of the club swim team. He likes to participate in hackathons, in which teams compete to create an app or piece of hardware in a short period.

This year's George B. Wood Legacy Sophomore Prize is shared by Vladimir Feinberg and Lydia Liu. The prize is given to a member of the junior class in recognition of exceptional academic achievement during sophomore year.

Feinberg, of Saratoga, California, graduated from Harker School in San Jose. He is concentrating in computer science and is pursuing a certificate in statistics and machine learning.

A member of Forbes College, Feinberg received the Shapiro Prize for Academic Excellence. This summer he was a software engineering intern at Google.

He is a member of Princeton Association for Computing Machinery and plays club volleyball.

Liu, who is from Singapore, attended Raffles Institution. She is a B.S.E. candidate in operations research and financial engineering and is pursuing certificates in applications of computing and applied and computational mathematics. She received the Freshman First Honor Prize and the Shapiro Prize for Academic Excellence.

This summer, Liu was a quantitative analyst a Goldman Sachs. At Princeton, she is working on an independent research project advised by Amit Singer, professor of mathematics and the Program in Applied and Computational Mathematics.

A member of Forbes College, Liu is director of projects in the Princeton University Language Project, where she also serves as a Japanese and Chinese translator for nonprofit organizations. She also has translated for the student-run Princeton Chinese Theater and performed with the William Trego Singers.

This year's George B. Wood Legacy Junior Prize is shared by Cameron Platt and Yuval Wigderson. The prize is given to a member of the senior class in recognition of exceptional academic achievement during the junior year.

Platt, of Santa Barbara, California, graduated from Laguna Blanca School in Santa Barbara. She is an A.B. candidate in English who is pursuing certificates in theater and medieval studies.

This summer, on a fellowship awarded by the English department, she took a graduate seminar on James Joyce at the University of Oxford and conducted senior thesis research in 19th-century parish archives in the Bodleian Library at Oxford.

Platt received the Shapiro Prize for Academic Excellence, as well as several academic prizes from the English department and the theater program. For her senior thesis, she will study the narrative and spatial wanderings of female protagonists in Shakespeare, Jane Austen and Virginia Woolf.

Platt has acted, directed and served in other roles on 17 theater productions during her first three years at Princeton, through the Program in Theater, Princeton Shakespeare Company, Triangle Club, Grind Arts Company, Theatre Intime and the Princeton University Players, where she is president. She also is a peer academic adviser at Wilson College and is a representative on the undergraduate advisory committee to the English department.

Wigderson, who is from Princeton and is a graduate of Princeton High School, is pursuing a Bachelor of Arts in mathematics and a certificate in applied and computational mathematics.

Last year, he received the Shapiro Prize for Academic Excellence and a Goldwater Scholarship, which is awarded to outstanding undergraduates nationwide interested in careers in mathematics, the natural sciences and engineering. He also was awarded the Andrew H. Brown Prize by the mathematics department. His senior thesis topic is information theory.

In June, Wigderson presented a research paper at a conference in Hong Kong, and during July and August he worked as a counselor at Canada/USA Mathcamp. Last fall, he studied in Hungary through the Budapest Semesters in Mathematics program. Wigderson is affiliated with Mathey College.

Saisai Chen received the Class of 1939 Princeton Scholar Award, which is awarded each year to the undergraduate who, at the end of junior year, has achieved the highest academic standing for all preceding college work at the University.

Chen, of Devon, Pennsylvania, attended Lincoln High School in Sioux Falls, South Dakota. She is an A.B. candidate in molecular biology and is pursuing a certificate in global health and health policy.

Chen plans to attend medical school after graduation. She hopes to study the biology of disease as well as the many factors that influence health in a diverse patient population.

Over the summer, she participated in the Summer Undergraduate Research Program on campus, working on her senior thesis on human cytomegalovirus replication and pathogenesis in the lab of Thomas Shenk, the James A. Elkins Jr. Professor in the Life Sciences. She also participated in research discussion groups and attended faculty seminars.

Chen is involved in the Princeton Premedical Society, the Women's Mentorship Program and the Wind Ensemble. She volunteers for the Princeton Young Achievers after-school program and Cornerstone Community Kitchen. She also serves on the undergraduate student committee for the molecular biology department, as a peer academic adviser in Butler College, as a health professions peer adviser, and as an Orange Key tour guide.