Princeton University celebrated the accomplishments of its students with the awarding of four undergraduate prizes at Opening Exercises on Sunday, Sept. 7. 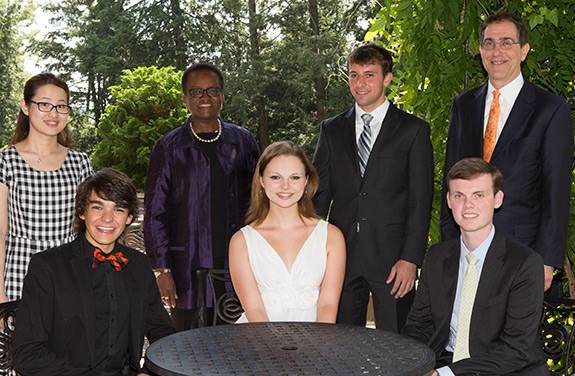 Honored for their academic achievements, pictured with President Christopher L. Eisgruber (standing at far right) and Dean of the College Valerie Smith (standing second from left), are, standing from left, Lydia Liu and Michael Russell, and, seated from left, Michael Semenov, Allison Kruk and Neil Hannan. (Photo by Denise Applewhite, Office of Communications)

Lydia Liu received the Freshman First Honor Prize, which is awarded each year to a sophomore in recognition of exceptional achievement during freshman year.

Liu, who is from Singapore, attended Raffles Institution. She is concentrating in operations research and financial engineering and is considering certificates in the applications of computing and applied and computational mathematics.

This summer, she interned in the analytics area of a multinational media agency in Singapore, where she performed market research and participated in developing analytics products involving natural language processing and statistical modeling.

Liu is an officer in the Princeton University Language Project and is serving as co-director of the translation speaker series. She is a Japanese and Chinese translator and has translated for the student-run Princeton Chinese Theater.

Michael Russell received the George B. Wood Legacy Sophomore Prize, which is presented each year to a member of the junior class in recognition of exceptional academic achievement during sophomore year.

Russell, of Branchburg, New, Jersey, attended Regis High School in New York City. He is pursuing a Bachelor of Arts in economics and a certificate in finance. Last year he received the Shapiro Prize for Academic Excellence.

He is interested in economic history and international trade. This summer, Russell worked as a portfolio analyst for Prudential Fixed Income in Newark, New Jersey.

This year's George B. Wood Legacy Junior Prize is shared by Neil Hannan and Allison Kruk. The prize is given to a member of the senior class in recognition of exceptional academic achievement during junior year.

Hannan, of Manhasset, New York, graduated from Regis High School. He is an A.B. candidate in classics and is pursuing a certificate in finance. He has twice received the Shapiro Prize for Academic Excellence. During the summer of 2013, he participated in the Princeton-sponsored Apulum Archaeological Excavation in Alba Iulia, Romania.

Hannan's long-term goals are to study the drivers of economic behavior for use in economic policy work and academic work. Over the summer, he interned at Bridgewater Associates, a macroeconomic hedge fund in Connecticut.

Hannan has served as a research assistant to Melissa Lane, the Class of 1943 Professor of Politics. He is a peer adviser for freshmen in Forbes College and has served as a tutor in introductory economics and statistics at the McGraw Center for Teaching and Learning. He is a portfolio manager on the Business Today investment team and the community service chair of Princeton Charter Club. He is an undergraduate fellow for the Behrman Society of Undergraduate Fellows and the James Madison Program in American Ideals and Institutions.

Kruk, of Redding, Connecticut, attended Greens Farms Academy. She is pursuing a Bachelor of Arts in sociology and certificates in African American studies and gender and sexuality studies.

Kruk's research interests include health and race and gender. She held an international internship the summer before her junior year at the Indian Institute for Cerebral Palsy in Kolkata, India. After graduation, she hopes to conduct market research and develop advertising strategies for nonprofits before pursuing a Ph.D. in sociology. This summer, she is interning at JWTIntelligence, a subgroup of the J. Walter Thompson ad agency.

Outside the classroom, Kruk is co-president of Princeton Disability Awareness, a Writing Center fellow, a mentor in the Big Brothers Big Sisters program, a Dillon Youth basketball coach and a fitness attendant at Dillon Gym. She has pursued an internship at Bellevue Hospital in New York and worked with the Petey Greene Prisoner Assistance Program.

Michael Semenov received the Class of 1939 Princeton Scholar Award, which is awarded each year to the undergraduate who, at the end of junior year, has achieved the highest academic standing for all preceding college work at the University.

Semenov, of San Francisco, attended San Francisco University High School. An A.B. candidate, he is an architecture major pursuing certificates in urban studies and translation and intercultural communication. He is a recipient of the George B. Wood Legacy Sophomore Prize and twice received the Shapiro Prize for Academic Excellence.

Semenov is interested in applying the principles of good architecture and urban and environmental planning on a large scale. For his senior thesis in architecture, he is examining how buildings can be designed to be added to incrementally.

This summer he visited Lima, Peru, and Santiago, Chile, to research public housing projects and how buildings could be expanded as families gain resources to build more rooms or stories. Also this summer, he worked for Duany Plater-Zyberk & Company, an urban planning and architecture firm in Miami founded by Princeton alumni Andrés Duany and Elizabeth Plater-Zyberk. Semenov serves on the School of Architecture Student Advisory Board.

Semenov is also a published translator of Russian poetry. He is writing a thesis for his certificate in translation on the use of the informal/formal distinction tu/vous that exists in many languages, but not English. He is involved in the Princeton University Language Project as a translation speaker series coordinator. He previously studied abroad through Princeton in Beijing.

Throughout his undergraduate career, Semenov has engaged with campus sustainability initiatives, serving as co-president of Greening Princeton, chair of the Greening Dining Committee and member of the GreenLeaders forum. He is on the Princeton Pedestrian and Bicycle Advisory Committee.

He is a member of the Chapel Choir and has been involved with Theatre Intime, the Princeton Opera Company, the Nassau Literary Review and the Princeton Birding Club.