Princeton University celebrated the accomplishments of its students with the awarding of four undergraduate prizes at Opening Exercises on Sunday, Sept. 8. 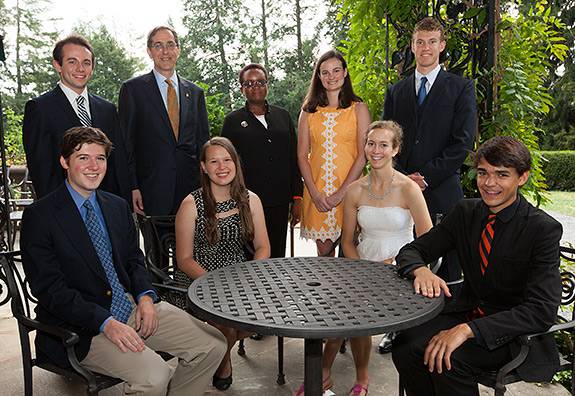 Julia Metzger received the Freshman First Honor Prize, which is awarded each year to a sophomore in recognition of exceptional academic achievement during freshman year.

Metzger, of Palm Beach, Fla., attended the Groton School. She plans to earn an A.B. in molecular biology and is considering certificates in global health and health policy, neuroscience, and quantitative and computational biology. She is enrolled in the Integrated Science curriculum, and she will receive the Shapiro Prize for Academic Excellence later this month.

This summer, she conducted an independent research project in a systems biology and neuroscience laboratory at the Centre for Genomic Regulation in Barcelona, Spain.

Metzger is a member of the Chapel Choir, Princeton Running Club and the Human Values Forum, as well as a senior writer for Innovation magazine. This coming year, she will serve as a member of the board of the Episcopal Church of Princeton.

The George B. Wood Legacy Sophomore Prize is presented each year to a member of the junior class in recognition of exceptional academic achievement during the sophomore year. This year, the prize is shared by Christopher McCord and Michael Semenov.

McCord, of Newark, Del., attended Archmere Academy. A B.S.E. candidate, he is a chemical and biological engineering major pursing certificates in engineering physics, applications of computing and engineering biology. He is a recipient of the Manfred Pyka Prize for Physics and the Shapiro Prize for Academic Excellence, and he will receive a second Shapiro Prize later this month for his sophomore year.

He is interested in pursuing research that combines biology, engineering and computer science. This summer, McCord interned at the DuPont Experimental Station in Wilmington, Del., working in research and process development for businesses in the fluoropolymers sector.

He is a member of the varsity sprint football team and the James Madison Program in American Ideals and Institutions.

Semenov, of San Francisco, attended San Francisco University High School. A Bachelor of Arts candidate, Semenov is an architecture major pursing a certificate in urban studies. He is also considering a certificate in linguistics. He is a recipient of an award for Outstanding Work by a Freshman in Creative Writing for his translation work and the Shapiro Prize for Academic Excellence, and he also will receive a second Shapiro Prize later this month.

This summer, Semenov interned for Duany Plater-Zyberk & Co., an urban planning and architecture firm in Miami founded by Princeton alumni Andrés Duany and Elizabeth Plater-Zyberk. His projects included working on a downtown revitalization project in Louisiana and street designs for a project in Phoenix. He also spent a week in Colombia doing research on the urban transport systems and public space designs in Bogotá and Medellín. He has previously studied abroad through Princeton in Beijing.

This year's George B. Wood Legacy Junior Prize is shared by Michaela Karis and William Mantell. The prize is given to a member of the senior class in recognition of exceptional academic achievement during the junior year.

Karis, of Phoenix, attended Chaparral High School. An A.B. candidate, she is a comparative literature major pursing a certificate in East Asian studies. She is the recipient of a Lewis Center for the Arts Creative Writing Award.

Karis' research interests include cross-cultural studies, themed environments and creative writing. For her thesis, she plans to write a cross-cultural comparison of the Disney theme parks in Hong Kong, Paris, Tokyo and the United States. After graduation, she plans to pursue interdisciplinary creative and cultural studies at a university abroad as a path to a career as a screenwriter developing socially conscious motion pictures as well as exploring innovative modes of interactive storytelling including theme parks, digital immersion experiences and electronic literature.

This summer, Karis was in Los Angeles working in development for several film and television production companies. Previously, she studied abroad through Princeton in Spain and in Kyoto through the Kyoto Consortium for Japanese Studies.

Outside the classroom, she is general manager of Theatre Intime, where she has previously served as programs manager, costumes manager and director of a production.

Mantell, of Chappaqua, N.Y., attended Horace Greeley High School. He is pursing a Bachelor of Arts in politics and a certificate in American studies.

This summer, he worked at SKDKnickerbocker, a public relations and strategic communications firm primarily retained by political figures and advocacy and nonprofit groups. After graduation, he hopes to work on a political campaign through fall 2014, then pursue a career in politics or policymaking.

Mantell is president of the College Democrats, a writer for the Nassau Weekly and a Mathey College peer academic adviser. He studied abroad through Princeton's Macerata Program in Italian Studies the summer after his freshman year.

The Class of 1939 Princeton Scholar Award is given to the undergraduate who, at the end of the junior year, has achieved the highest academic standing for all preceding college work at the University. This year, the award is shared by Alexander Iriza and Katherine Pogrebniak.

Iriza, of Astoria, N.Y., attended the Dalton School. An A.B. candidate, he is a mathematics major pursuing certificates in applied and computational mathematics and applications of computing. He has received the Andrew H. Brown Prize for outstanding junior in mathematics and was awarded the Shapiro Prize for Academic Excellence twice.

Iriza's research centers on techniques of data analysis, including convex optimization and nonlinear dimensionality reduction. Previously, he has undertaken research of financial markets, as well as inertial fusion energy at the Princeton Plasma Physics Laboratory. After graduation, he is considering either pursuing a doctorate in applied mathematics or moving directly into a career as a software developer.

This summer, Iriza conducted research in the fields of semidefinite programming and convex relaxation with Amit Singer, a professor of mathematics and the Program in Applied and Computational Mathematics.

Pogrebniak lives in Jacksonville, Fla., and attended the Bolles School. She is a B.S.E. candidate in computer science and is pursuing a certificate in engineering biology. She has been awarded the Shapiro Prize for Academic Excellence twice.

Pogrebniak's research focuses on biological applications of computer science, in particular, computational biology and neuroimaging. For her junior independent research, she worked with Mona Singh, a professor of computer science and the Lewis-Sigler Institute for Integrative Genomics, to study the problem of predicting protein-small molecule interactions. She plans to attend medical school, pursue a career in academic medicine and develop new ways to utilize imaging in neurosurgery.

This summer, Pogrebniak interned at the Translational Neuroradiology Unit at the National Institute of Neurological Disorders and Stroke, part of the National Institutes of Health. She worked on a pilot study to investigate the cortical myelination patterns in patients with multiple sclerosis using magnetic resonance imaging techniques.

Outside the classroom, she is vice president of Tau Beta Pi, the engineering national honor society; a BSE interactor, advising freshman engineers; treasurer of Princeton Women in Computer Science; a residential college adviser in Wilson College; and community outreach chair on the executive board of Community House, where she also serves as science project coordinator, planning and implementing science experiments for middle school students.