Princeton celebrated the accomplishments of its students with the awarding of four undergraduate prizes at Opening Exercises Sept. 12. 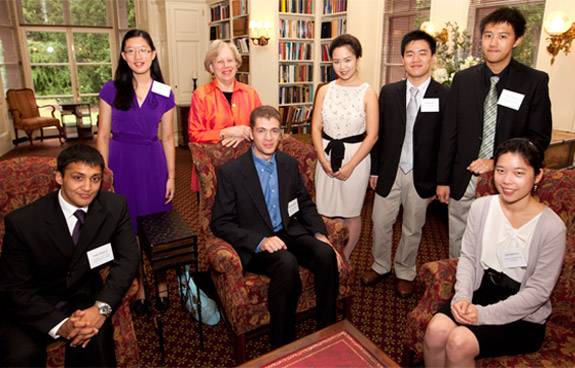 The Freshman First Honor Prize is awarded each year to a sophomore in recognition of exceptional academic achievement in the work of the freshman year. This year, the prize is shared by Irene Lo and Chengming Zhu.

An A.B. candidate, Lo plans to major in mathematics and is considering a certificate in engineering and management systems. This summer, she conducted research on the Princeton campus with Amit Singer, an assistant professor of mathematics and the Program in Applied and Computational Mathematics. She is one of the recipients of the Manfred Pyka Memorial Prize in Physics for 2009-10. Next month, she will receive the Shapiro Prize for Academic Excellence for her freshman year.

Lo, a member of Wilson College, sings in the Princeton University Glee Club and the Kindred Spirit a cappella group. She also is the webmaster of Manna Christian Fellowship.

Zhu lives in Shanghai, China. He graduated from the Hotchkiss School in Lakeville, Conn., where he won the First Scholar Prize, an honor similar to being named valedictorian of his graduating class.

An A.B. candidate, Zhu is considering a major in either mathematics or economics, with certificates in both finance and applied and computational mathematics. Next month, he will receive the Shapiro Prize for Academic Excellence for his freshman year. This summer, he participated in Princeton's Global Seminar in Vietnam.

Ian Wong received this year's George B. Wood Legacy Sophomore Prize, presented each year to a member of the junior class in recognition of exceptional academic achievement during the sophomore year.

Wong lives in Irvine, Calif., and is a graduate of Northwood High School. An A.B. candidate, he is a physics major pursuing certificates in linguistics, musical performance, and Russian language and culture, and is considering another certificate in applied and computational mathematics.

Wong's research interests include astrophysics and new applications of the theory of quantum control. He conducted research this summer on the feasibility of quantum control of nuclear dynamics using laser fields as part of the Program in Plasma Science and Technology at the Princeton Plasma Physics Laboratory (PPPL), working under the guidance of Herschel Rabitz, the Charles Phelps Smyth '16 *17 Professor of Chemistry.

Wong won the Manfred Pyka Memorial Physics Prize for his freshman year and the Eugene Taylor Prize in Physics for his sophomore year, and he has twice won the Shapiro Prize for Academic Excellence. After graduation Wong plans to continue his education with graduate studies in physics and possibly violin performance as well.

The George B. Wood Legacy Junior Prize is given to a member of the senior class in recognition of exceptional academic achievement during the junior year. This year, the prize is shared by Vishal Chanani and Carlee Joe-Wong.

Chanani lives in Plano, Texas, and is a graduate of Plano Senior High School. An A.B. candidate, he is majoring in economics and pursuing certificates in applied and computational mathematics and finance. He twice has won the Shapiro Prize for Academic Excellence.

This summer, Chanani interned at the Boston Consulting Group. His research interests include game theory and behavioral finance. In his senior thesis, he is likely to model the behavior of participants in financial markets, focusing on the interaction among investors, rating agencies and investment services firms. He plans to earn a law degree and pursue a Ph.D. in economics.

Chanani is a member of the Faculty-Student Committee on Discipline and a number of campus organizations, including the Princeton Debate Panel, the Fields Center Undergraduate Fellows Program and Princeton Hindu Satsangam. He is a member of Whitman College.

Joe-Wong lives in West Hills, Calif., and is a graduate of Harvard Westlake School in North Hollywood. An A.B. candidate, she is a mathematics major pursuing a certificate in applied and computational mathematics.

This summer, she also worked under Rabitz in the Program in Plasma Science and Technology at the PPPL, conducting research on control of classical mechanical systems.

Joe-Wong has submitted the results of her junior paper on time-dependent broadband pricing for conference publication, and her senior thesis will focus on optimal control of classical mechanical molecular systems. She plans to pursue a Ph.D. in mathematics.

A member of Butler College, Joe-Wong is a chemistry tutor at the McGraw Center for Teaching and Learning. She also plays piano for Princeton Music Outreach.

This year's Class of 1939 Princeton Scholar Award is shared by John Pardon and Veronica Shi. The award is given to the undergraduate who, at the end of the junior year, has achieved the highest academic standing for all preceding college work at the University.

Pardon lives in Chapel Hill, N.C., and is a graduate of the Durham Academy Upper School. An A.B. candidate, Pardon is majoring in mathematics.

In addition to prizes for outstanding achievement within the mathematics department, Pardon won the Barry M. Goldwater Scholarship, a national award recognizing outstanding potential in math, natural sciences or engineering. He twice has won the Shapiro Prize for Academic Excellence.

Pardon works in pure mathematics and has done research in differential geometry, topology and probability theory. He has had two papers accepted for publication in mathematics journals. His work on a problem in knot theory may become part of his senior thesis.

This summer, he conducted applied math research for the Department of Defense. After graduation, he plans to pursue a Ph.D. in mathematics.

Pardon also is a dedicated student of Chinese, attending the language immersion Princeton in Beijing program after his freshman year and completing advanced work in Chinese on campus.

Shi lives in West Covina, Calif., and is a graduate of Arcadia High School. An A.B. candidate, she is a classics major. She twice has won the Shapiro Prize for Academic Excellence and is a Mellon Mays Undergraduate Fellow.

This summer, Shi attended a program in Indo-European linguistics at Leiden University in the Netherlands and conducted research for Edward Champlin, Princeton's Cotsen Professor of Humanities and professor of classics. Shi's research interests are in Greek and Latin literature, especially Latin poetry of the Republican and Augustan eras.

For her senior thesis, she will study the development of epic poetry from Homer to Virgil, with an emphasis on the genre's transformation from a repository of myth into a tool of political and cultural persuasion in Hellenistic Greece and Rome. She also is working on a libretto in Latin for a senior thesis opera production. Shi plans to pursue graduate studies in classics, teach at the university level and contribute to higher education policymaking.

Shi was an active member of the Butler College community for three years and is now a member of Mathey College. She was a peer academic adviser at Butler and will continue in that role in her new college. She also is a student member of the Faculty Committee on the Course of Study, as well as a member of the Undergraduate Student Government's Academics Committee and the Behrman Undergraduate Society of Fellows. Shi has organized Greek tragedy reading groups for undergraduates and faculty, and she helps coach her high school's constitutional law debate team.