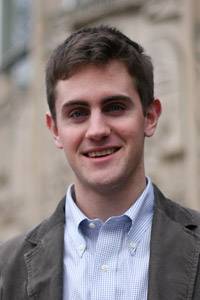 Princeton senior Kyle Jaros has been named the recipient of the 2005 Daniel M. Sachs Class of 1960 Graduating Scholarship.

The award, one of the highest honors given to Princeton undergraduates, was established in 1970 to provide a senior with the opportunity to study, work or travel abroad after graduation. It will fund Jaros' tuition and living expenses for next year as he travels to Nanjing University to continue Chinese language study and to research the relationship between Chinese nationalism and China's foreign policy in the early 20th century.

"I was incredibly surprised to learn that I had been selected to receive the award," Jaros said. "I am very excited about the opportunities the scholarship opens up for me, and very humbled by the task of carrying on the legacy of Daniel Sachs '60 and previous scholars. I owe many thanks to my family, my professors, my friends and my classmates for the encouragement they have given me."

Classmates and friends established the scholarship in memory of Daniel Sachs, who starred in football and lacrosse at Princeton before attending Worcester College at Oxford University as a Rhodes Scholar. He died of cancer at age 28. The award is given to the senior who best exemplifies Sachs' character, intelligence and commitment, and whose scholarship is most likely to benefit the public.

"I consider Kyle Jaros an outstanding young scholar and leader -- highly intelligent, well organized, very motivated, thoughtful and considerate -- who leads by knowledge, service and example," said Wolfgang Danspeckgruber, lecturer in public and international affairs and director of the Liechtenstein Institute on Self-Determination. "He represents the best of what Princeton's students should and do stand for."

Currently, Jaros is completing a senior thesis on "Sovereignty Concerns and Multilateralism in Chinese Foreign Policy." He conducted research in China on this project and also served as a research assistant for the Beijing-based publication, China Development Brief, in the summer of 2004. He attended the Princeton-in-Asia Beijing Intensive Language Program in the summer of 2003.

Recently elected to Phi Beta Kappa, Jaros is a recipient of the Wilson School's R.W. van de Velde Award and two Shapiro Prizes for academic excellence from the University. Last spring, he co-organized a successful student-faculty colloquium on contemporary China titled "Keeping the Dragon Aloft." He is a former vice president of the Princeton International Relations Council of the American Whig-Cliosophic Society and the current co-chair of the Princeton Institute for International and Regional Studies Undergraduate Fellows Program. He has been an intern in Princeton's International Center since 2003.

Jaros is a member of the non-staff editorial board of The Daily Princetonian, and has written a series of editorials and columns for the student newspaper. A backpacking trip leader for Outdoor Action (a University pre-orientation program), he also is a member of Topshelf, a student rock band that has performed in campus venues.