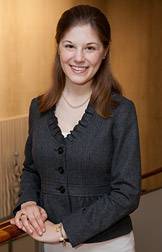 Senior Olivia Waring, a chemistry major with an interest in Chinese language and translation, has been awarded the 2012 Daniel M. Sachs Class of 1960 Graduating Scholarship, one of the highest awards given to Princeton University undergraduates.

Waring, a native of Randolph, N.J, plans to use the Sachs award to pursue postgraduate studies in linguistics and philology at the University of Oxford, with an emphasis on Mandarin Chinese and Tibetan languages. Her hope is to help revive disappearing dialects and translate key scientific works into those languages.

Waring arrived at Princeton with a prize-winning background in both science and languages — she studied Latin and Italian during high school — and quickly developed an interest in quantum mechanics after taking a course with Annabella Selloni, the David B. Jones Professor of Chemistry.

"That class really shaped my love of chemistry," Waring said. "Quantum mechanics fundamentally changed the way I perceive the world. Suddenly you realize that things you thought you could take for granted as deterministic are subject to the vicissitudes of fate. There is an element of chance in everything, even down to the oscillations of electrons. It's a profound and startling insight."

Two trips to Germany, the first to study German as part of the Princeton in Munich program after freshman year; the second as a German Academic Exchange Service scholar at the Heidelberg Institute for Theoretical Studies computing center the summer after junior year, improved both Waring's German and her research skills.

But eight weeks spent in China during the summer after her sophomore year in the Princeton in Beijing Chinese language immersion program ignited a fresh academic interest.

"Until then, I assumed I would follow a scientific career trajectory," Waring said. "But my experience in Beijing transformed how I thought about language-learning, interacting with people from different cultures and public service. I also began to see a possible career path in linguistics and lexicography: creating a bridge between science and language through the documentation of endangered languages and dialects."

Waring, who is completing a certificate in Chinese language, became fluent in Mandarin while also thinking about ways to apply scientific rigor and methods to language problems such as teaching and translation. In particular, she hopes to inject new life into disappearing languages such as Amdo and Chukwa, two dialects of Tibetan.

"The phenomenon of endangered language death parallels the global loss of biodiversity," Waring said. "Languages of the world are obsolescing at a dizzying rate; more than half of the 7,000 languages on the planet are not currently being taught to children, and many have less than a dozen living speakers. Language is the medium through which we propagate our cultural heritage, and a fundamental part of what it means to be human. Each one is equally important and aesthetically valuable."

Her Oxford course of study will be two-pronged: a systematic study of Mandarin and Tibetan, as well as an ongoing project to translate important scientific works and texts from English — by hand, computer or both — so that researchers who only speak those languages could begin to access those works.

"Dan Sachs' legacy really resonates with me," Waring said. "I'm thrilled and honored to receive this scholarship, but also very humbled, and aware of a great sense of responsibility. Dan did not get the chance to realize all of his dreams of doing good in the world, and to be chosen to carry out his unfulfilled ambitions inspires me with a powerful sense of mission."

For her senior thesis, Waring is using computational modeling to examine ways of reducing oxidation of electrodes in hydrogen fuel cells, a technology that could one day turn sunlight and water into energy.

"This is a very significant achievement for an undergraduate," said Selloni, who is advising Waring's thesis. "Olivia was able to do this because she acquired knowledge of molecular dynamics methodologies and codes during her research work in Germany."

Selloni added, "I am very impressed by the breadth of her interests and the variety of her talents. She is an excellent chemistry student who also has the ability to take class notes in Chinese, speak any of four languages and then go to a rehearsal after class and play violin."

A graduate of Villa Walsh Academy in Morristown, N.J., Waring's proficiency in Italian won her a Foreign Language Educators of New Jersey scholarship. In 2010, she won a national Mandarin competition, called the Chinese Bridge Speech and Talent Competition, sponsored by the Chinese Embassy and the Confucius Institute. At Princeton, she twice won the Shapiro Prize for Academic Excellence. She is active in campus groups including the Princeton Chinese Music Ensemble  — which she co-founded, and in which she plays violin and zither — and the Princeton University Chamber Choir, in which she sings soprano.

Waring also has performed with the Princeton University Players and Sinfonia, tutored English with the Community-Based Learning Initiative, and served as a board member with the Women in Science Colloquium.