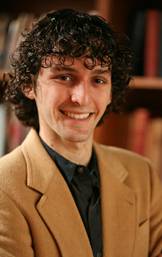 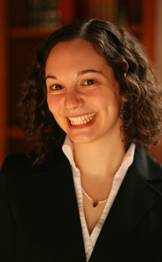 Two seniors with extensive backgrounds in foreign languages and cultures have been named recipients of the 2007 Daniel M. Sachs Class of 1960 Graduating Scholarship, one of the highest awards given to Princeton undergraduates.

Joshua Goldsmith, an independent concentrator who is studying historical linguistics and language acquisition, plans to use his Sachs award to pursue a one-year master's program in the teaching of French as a foreign language at the Université Marc Bloch in Strasbourg, France. Emily Stolzenberg, a German major, will enroll in a two-year master's program in political theory at Worcester College at the University of Oxford.

The Sachs Scholarship was established in 1970 to provide a senior with the opportunity to study, work or travel abroad after graduation. Due to gains in the scholarship's endowment, the Sachs selection committee this year was able to choose two recipients for the first time. The committee hopes to name two winners in most years going forward if fund-raising efforts are successful.

Classmates and friends established the scholarship in memory of Daniel Sachs, who starred in football and lacrosse at Princeton before attending Worcester College as a Rhodes Scholar. He died of cancer at age 28. The award is given to a senior who best exemplifies Sachs' character, intelligence and commitment, and whose scholarship is most likely to benefit the public.

Goldsmith, of Sarasota, Fla., is a candidate for certificates in Judaic studies and teacher preparation, in addition to his own program of study as an independent concentrator. Conversant in eight languages, he plans to become a high school foreign language teacher in underprivileged U.S. communities, which are "most in need of good teachers who understand pedagogy and have the dedication, energy and creativity to do whatever it takes to reach their students."

He added, "After a few years as a classroom teacher, I intend to teach pedagogy, since by passing methodological knowledge on to others, I have an opportunity to motivate other teachers and reach even more students." He also may pursue a career as a school director.

"The Sachs Scholarship is a unique recognition that advanced education can allow us to truly effect change in the world," Goldsmith said. "I would like to thank the Sachs advisers, my family, friends and professors for their immeasurable support and confidence in my dreams."

At the Université Marc Bloch, Goldsmith will learn more about European pedagogical methods, building on his current senior thesis research on foreign-language pedagogy. His thesis adviser, Joshua Katz, said Goldsmith "is likely to become a leader in the field of linguistic education."

"He is more articulate on the subject of foreign-language pedagogy than anyone else -- student or professor -- I have met in my nearly nine years on the Princeton faculty," said Katz, an associate professor of classics and a faculty member in the Program in Linguistics.

Goldsmith studied Hebrew, Arabic and linguistics at the University of Haifa in Israel last spring, while also serving as a volunteer English teacher for Ethiopian immigrants. He has worked for several years as a tutor in English, French, Hebrew, Spanish and several other subjects. He has taught Hebrew and Judaica at the String of Pearls school in Princeton since his freshman year. In 2004, he founded a youth group for Reconstructionist Jewish teens from three synagogues in the Princeton area and continues to serve as the group's adviser.

Goldsmith has been a member of the Nassoons a cappella group, the Princeton University Players theater troupe and the Juggling Club, as well as an Orange Key campus tour guide. He is president of Sexual Health Advisers, a student group that works with University Health Services to raise awareness on campus about sexual health issues, and helped launch The Daily Princetonian's sex education column. He also has served as an LGBT (lesbian, gay, bisexual and transgender) Peer Educator.

Stolzenberg, of Morgantown, W.Va., is concentrating in German cultural studies and is a certificate candidate in contemporary European politics and society. She will use the Sachs award to extend her academic focus on "issues of societal inclusion, exclusion and tolerance."

"Studying at Oxford is the opportunity of a lifetime, one that I never would have had otherwise," Stolzenberg said. "I am extremely honored and am thankful to those who have helped me to reach this point -- my family, my friends and my professors."

"The next step in my work for tolerance and justice is to deepen my knowledge of political theory," she said. "A comprehensive understanding of the history of political thought and ideologies will allow me to glean lessons from past theorists' writings and their political implementations, aiding my quest to improve my society through the law."

After her studies at Oxford, Stolzenberg plans to attend law school, to pursue work in support of civil liberties or human rights, and ultimately to become a judge or law professor.

"Emily's work is shaped by a most unusual constellation of intellectual virtues: She is not only immensely curious, but rigorous in her questioning; not only intellectually courageous and ambitious with respect to the topics she pursues, but artful -- even ingenious -- when it comes to presenting them, in spoken or written form," said Arnd Wedemeyer, assistant professor of German. "It is clear to me, furthermore, that Emily's remarkable thirst for knowledge is anchored in her tremendously engaged and, in the best sense of the word, civic existence."

Stolzenberg, who speaks six languages, has been awarded the Mary Cunningham Humphreys Prize for the best junior paper and coursework in the German department. She twice received the Shapiro Prize for Academic Excellence and was elected to Phi Beta Kappa.

Stolzenberg has helped coordinate community service projects for the Center for Jewish Life and participated in service trips to Montevideo, Uruguay, and to her hometown in West Virginia. She is a residential college adviser at Mathey College and a columnist for The Daily Princetonian. She has been a student coordinator of the Princeton Humanities Symposium and a musician and a technical staff member of the Triangle Club musical comedy troupe.