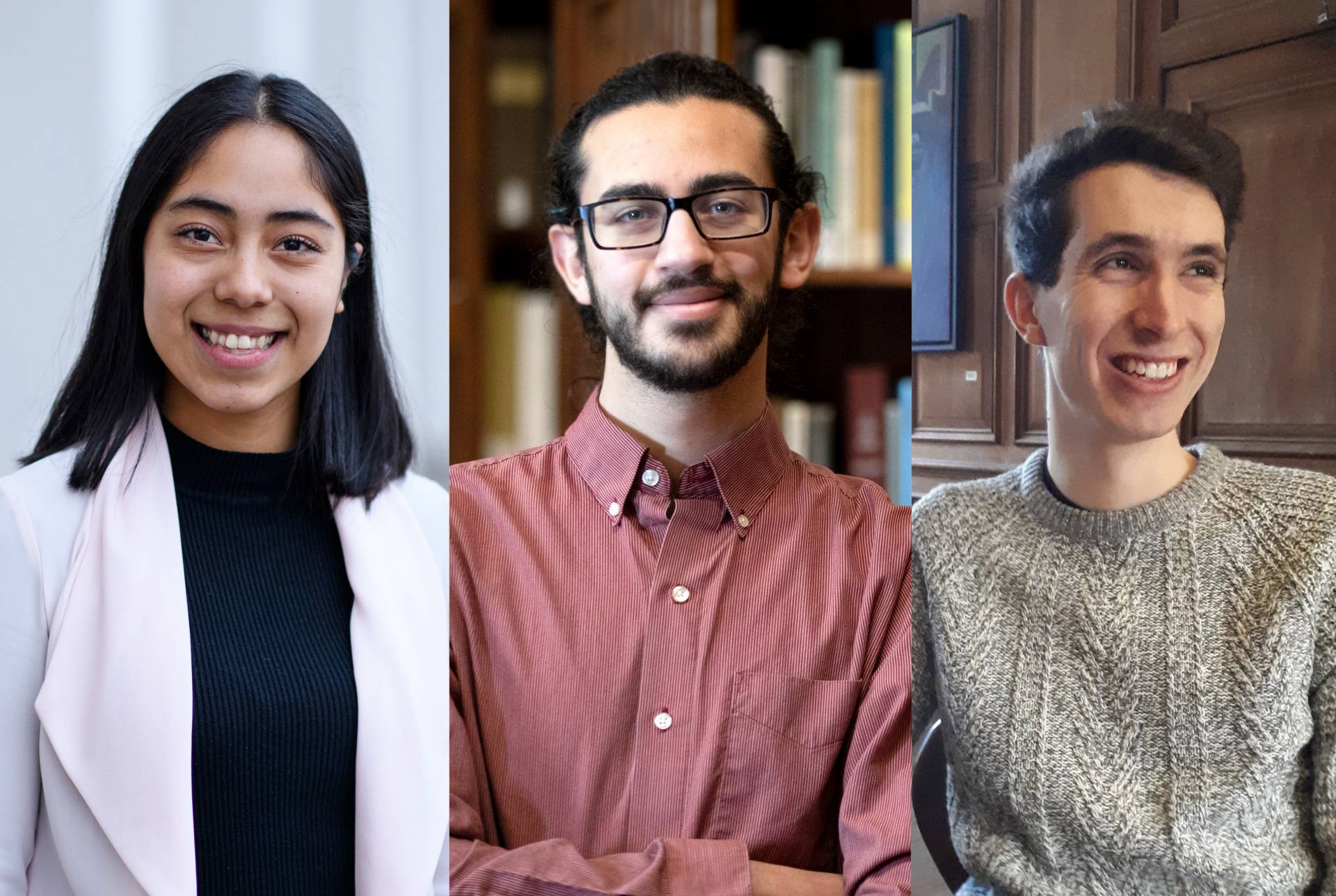 The Sachs Scholarship is intended to broaden the global experience of its recipients by providing them with the opportunity to study, work or travel abroad after graduation. It was established by classmates and friends of Daniel Sachs, a distinguished Princeton student athlete in the Class of 1960, who attended Oxford as a Rhodes Scholar. Sachs died of cancer at age 28 in 1967. The award is given to those who best exemplify Sachs’character, intelligence and commitment, and whose scholarship is most likely to benefit the public. 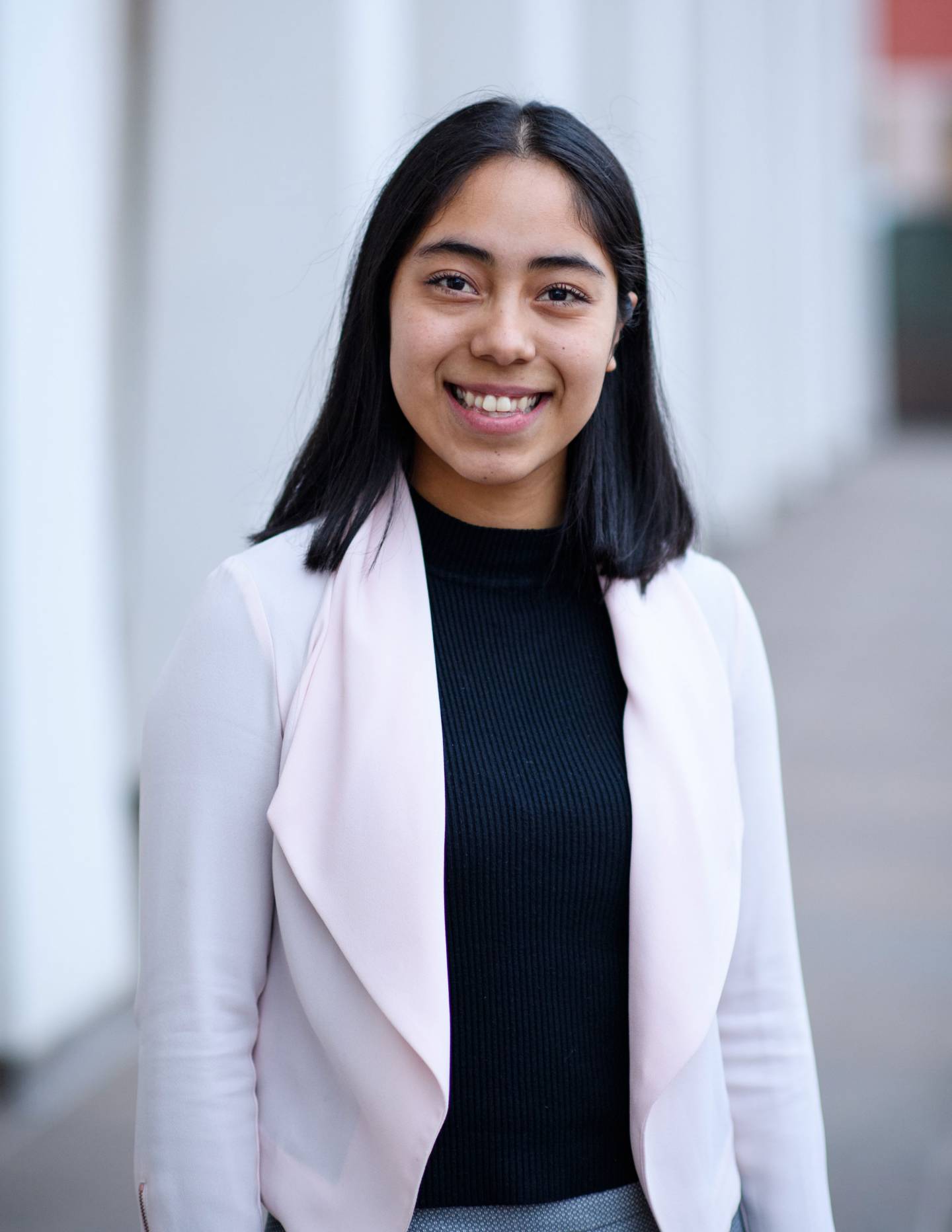 Gabriela Oseguera Serra, of Galloway, New Jersey, is a politics concentrator focusing on comparative politics. She is also pursuing a certificate in global health and health policy. Oseguera Serra is a member of the University’s Scholars in the Nation Service Initiative (SINSI) and is the recipient of awards from the John C. Bogle ’51 Bogle Fellowship and Princeton Health Scholars among others.

Oseguera Serra grew up in rural Oaxaca, Mexico, where she developed a personal interest in the health of indigenous populations. Her research focuses on the intersection of quantitative analysis and social understanding. At Oxford, she plans to pursue a master of philosophy in development studies.

In her personal essay, Oseguera Serra recalled how her grandmother became the unofficial doctor for indigenous communities around Oaxaca. Her grandmother was self-taught and incredibly knowledgeable though had no formal medical training, noted Oseguera Serra.

“As I grew older, I realized that these indigenous communities had no option,” Oseguera Serra said. “They lacked a health care facility in their own communities. Further, due to [the] weight of poverty and discrimination, the facilities nearby that they could theoretically access were impossible to reach. I felt frustrated at the fact that being ‘indigena’ was a negative influencing factor of health care accessibility.”

“Too often mediocrity has stained our responses to indigenous populations,” Oseguera Serra said. “If I aspire to be a leader that will provide indigenous populations with the global platforms they need, I will do it well. The Sachs Scholarship offers me the opportunity to acquire the necessary preparation to do so.”

“In a world in which being special has become banal, Gaby is truly special,” Adelman wrote in his letter of recommendation.

Oseguera Serra was a student in Adelman’s course “A History of the World from 1300,” where she found her passion combining humanities, social sciences and health sciences.

“Gaby wants to expand her global learning,” Adelman said. “She moved from a poor Oaxacan community to the Ivy League in one generation. Her travel took the form of books and study; reading transported Gaby to other places and times. That was the purpose of the course she took with me. I have watched her expand her horizons singlehandedly ever since.”

Oseguera Serra is smart, talented and hard-working and will use her Oxford education to help others, Adelman added.

“Gaby not only seizes and creates chances; she is a deep giver, a profound contributor. Wherever she goes and whatever she does, Gaby will make the world around her better,” he said.

In addition to her academic accomplishments, Oseguera Serra isa learning consultant through the McGraw Center, a fellow for the Pace Center Seniors Fellow Program, and a student representative for the Global Health Program. She is an undergraduate representative on the University Priorities Committee and a resident of Forbes College. Oseguera Serra also interned with Princeton in Asia in summer 2018, teaching English in Jishou, China. 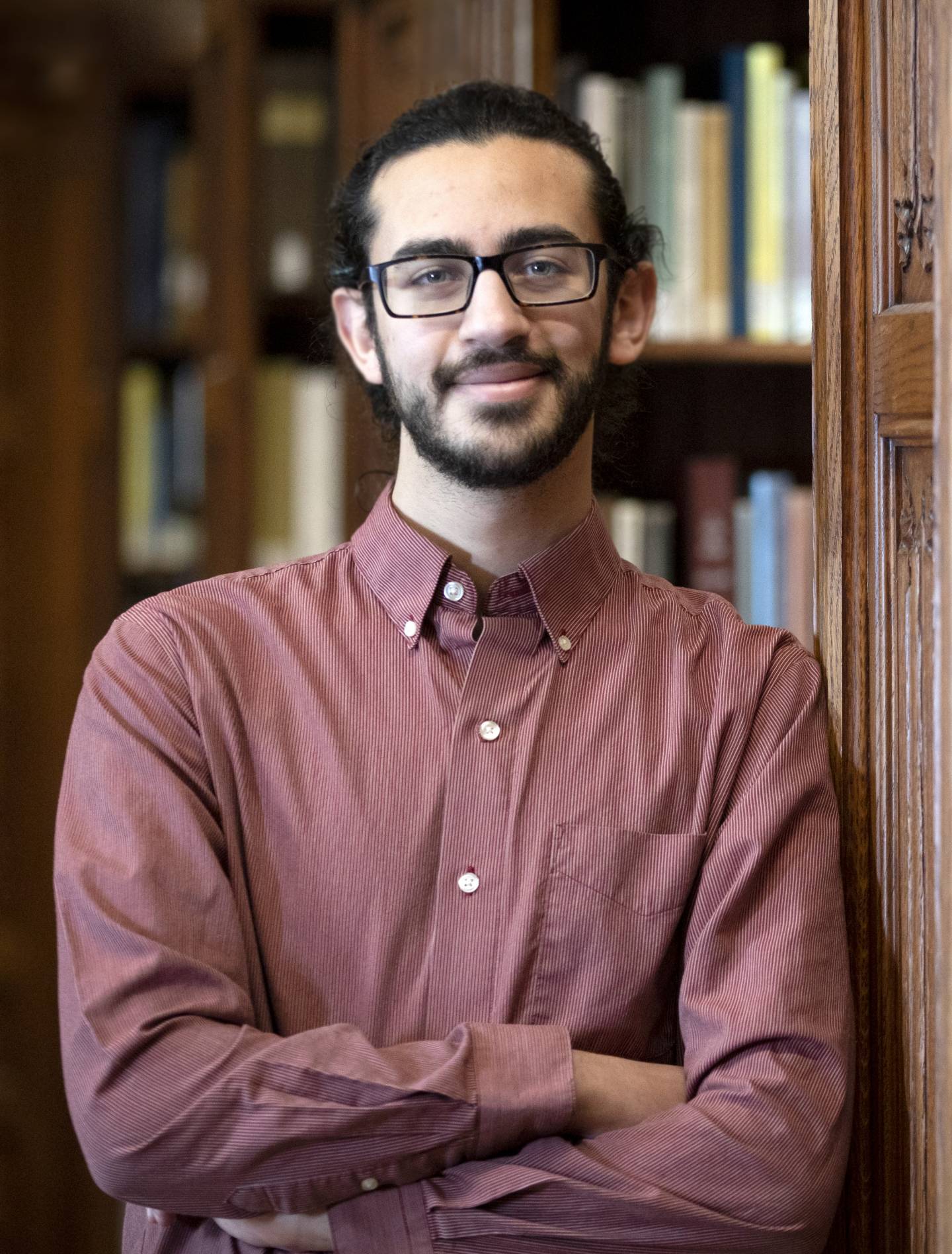 Yousef Elzalabany, of Allentown, Pennsylvania, is pursuing a concentration in Near Eastern studies and certificates in creative writing and humanistic studies. He is also a Princeton Institute for International and Regional Studies (PIIRS) undergraduate fellow and a recipient of the national Mellon Mays Undergraduate Fellowship.

Elzalabany is an accomplished poet with a particular interest in the history and lived experiences of Muslims. He proposes to spend the first year of his Sachs Global Scholarship studying Sufism in Cairo and Istanbul, and aims to spend the second year pursuing a master’s degree in Islamic intellectual history at the School of Oriental and African Studies (SOAS) in London.

“One of the fields of knowledge which remains intact but oft-misrepresented by scholars and fundamentalists alike is Islamic mysticism, or Sufism,” Elzalabany said in his personal essay. “I intend to use the Sachs Global Scholarship to initiate a project bridging the gap between traditional forms of knowledge acquisition and the tools of Western academic research.”

He said his two years of study through the Sachs Global Scholarship “will serve as methodological testing grounds for an eventual Ph.D. in Islamic studies.” He hopes to “incorporate Muslim lived experience and understandings of faith into academic understandings of Islamic history.”

“Ultimately, I am undertaking this project with an eye toward public scholarship, aiming to decenter fundamentalist readings of Islamic history for general audiences,” Elzalabany said. “In doing so, my goal is to combat narratives which contribute to the growing dehumanization of Muslims and to empower Muslims to see themselves in their history.”

Lara Harb, an assistant professor of Near Eastern studies, said Elzalabany’s intellectual and linguistic skills are coupled with a passion for his work and drive to help others.

“Yousef does all this with such humbleness and serenity,” Harb wrote in her letter of recommendation. “He is proactive, inquisitive and eager to empower those who are voiceless.”

Harb said Elzalabany’s interest in Islam and Sufism “is of vital importance both globally and for the communities he plans on studying.”

“Understanding Islam and its rich intellectual history is especially urgent in a world that is filled with increasingly simplistic views of the Middle East and its diverse communities,” she said. “Yousef has the academic background, sensitivity and intellect to investigate this topic responsibly, creatively and with authenticity.”

Elzalabany is also involved with student groups on campus. He served as vice president of the Muslim Students Association and president of the Muslim Advocates for Social Justice and Individual Dignity. He was co-chair of the Undergraduate Student Government’s U-Council, and is a residential college adviser in Forbes College and a member of the Behrman Society of Undergraduate Fellows.

He also served on the Pace Council for Civic Values and led a group of first-year students participating in Community Action during Orientation. 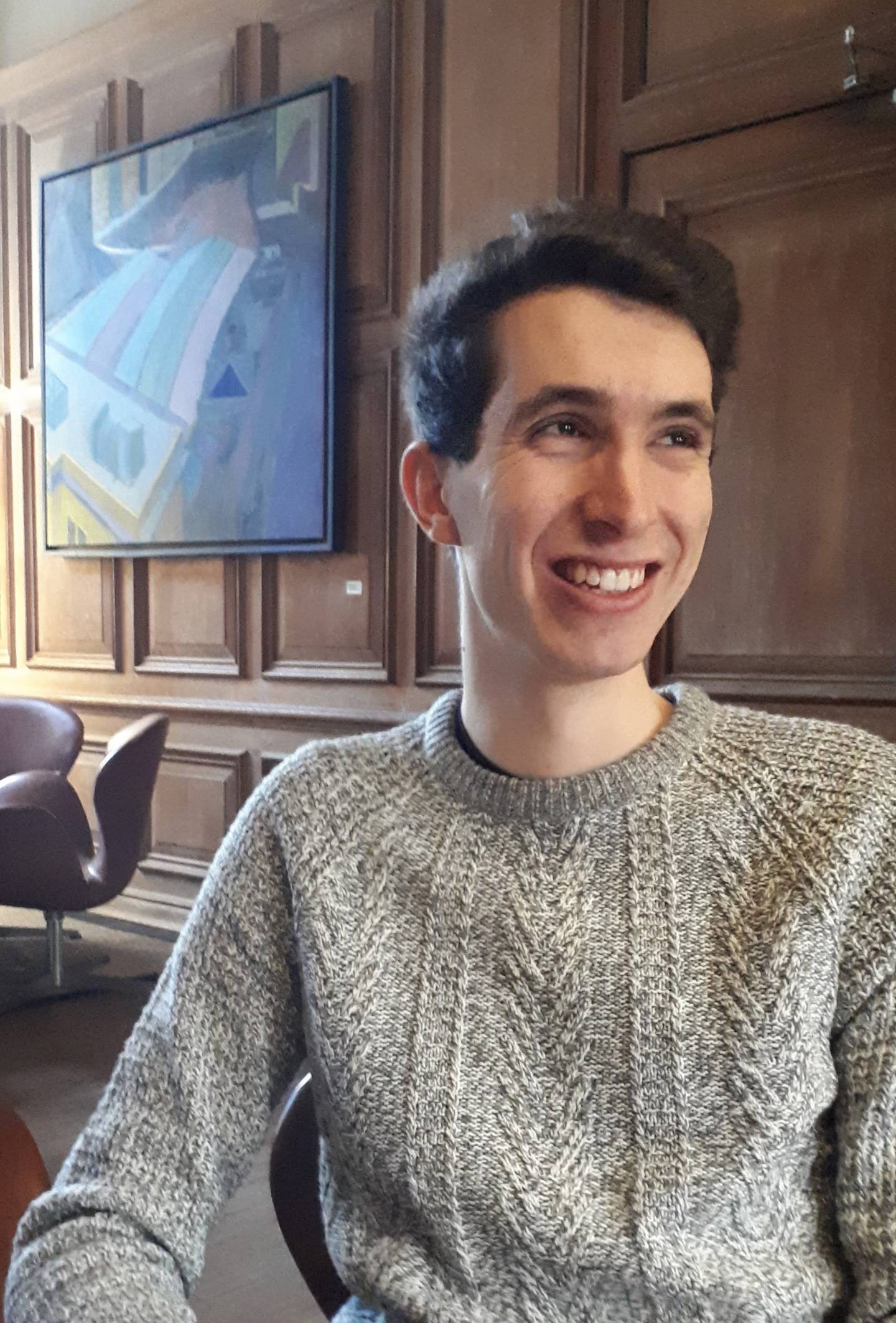 Matteo Parisi is a third-year Ph.D. candidate in mathematics at Worcester College, University of Oxford. He earned a master’s degree in theoretical and mathematical physics jointly at the Ludwig Maximilian and Technical University of Munich in Germany, and a bachelor’s of science in physics from the University of Bologna in Italy.

Parisi is the author of half a dozen papers on a mathematical object called the “amplituhedron.” He plans to spend a year as a visiting graduate student in physics at Princeton, collaborating with faculty whose research dovetails with his.

“I envision the fellowship at Princeton as a continuation of the exciting journey that Worcester and Oxford have generously offered me,” Parisi wrote in his personal essay. “More broadly, I see this opportunity as a chance to build on the connection between my love for the intrinsic beauty of mathematical physics and my commitment to contributing to society at large.”

As a teenager, Parisi said a pressing question challenged his mind and prompted his journey in fundamental physics and mathematics.

“Is there something which concerns all beings, which everyone should be interested in, independently of who they are or which part of the world they are from?” he said. “As a [doctoral] student in my third year … this very question still confronts me.”

Parisi called Princeton a leader in mathematical physics research. He said he’s eager to study “where the field’s world leaders are currently shaping the future of high energy physics and its related mathematical structures.”

“I would be extremely keen to take this opportunity to join this vibrant and flourishing community,” Parisi said. “Completing my [degree] in [Princeton’s] extraordinary environment would be a once-in-a-lifetime opportunity and a crucial steppingstone towards my future academic career.”

Lionel Mason, a professor of mathematics at Oxford, said Parisi will benefit greatly from working with Princeton faculty and other graduate students.

“Overall, he is a top-level student who likes to think deeply and has a great facility for the subject,” Mason wrote in his letter of recommendation. “He is also an excellent teacher and someone who is keen to engage with the world more broadly — earlier on this summer he went to Cameroon to teach mathematics to young African students.”

In addition to his academic work, Parisi is a leader of Oxford’s LGBTQ community, organizing conferences, discussions and trainings at Oxford related to LGBT issues. He also has served as a math teacher and tutor.