Princeton seniors Jimin Kang and Aisha Tahir, and University of Oxford student Hannah Duffus have been named recipients of the Daniel M. Sachs Class of 1960 Graduating Scholarship, one of Princeton University’s highest awards. 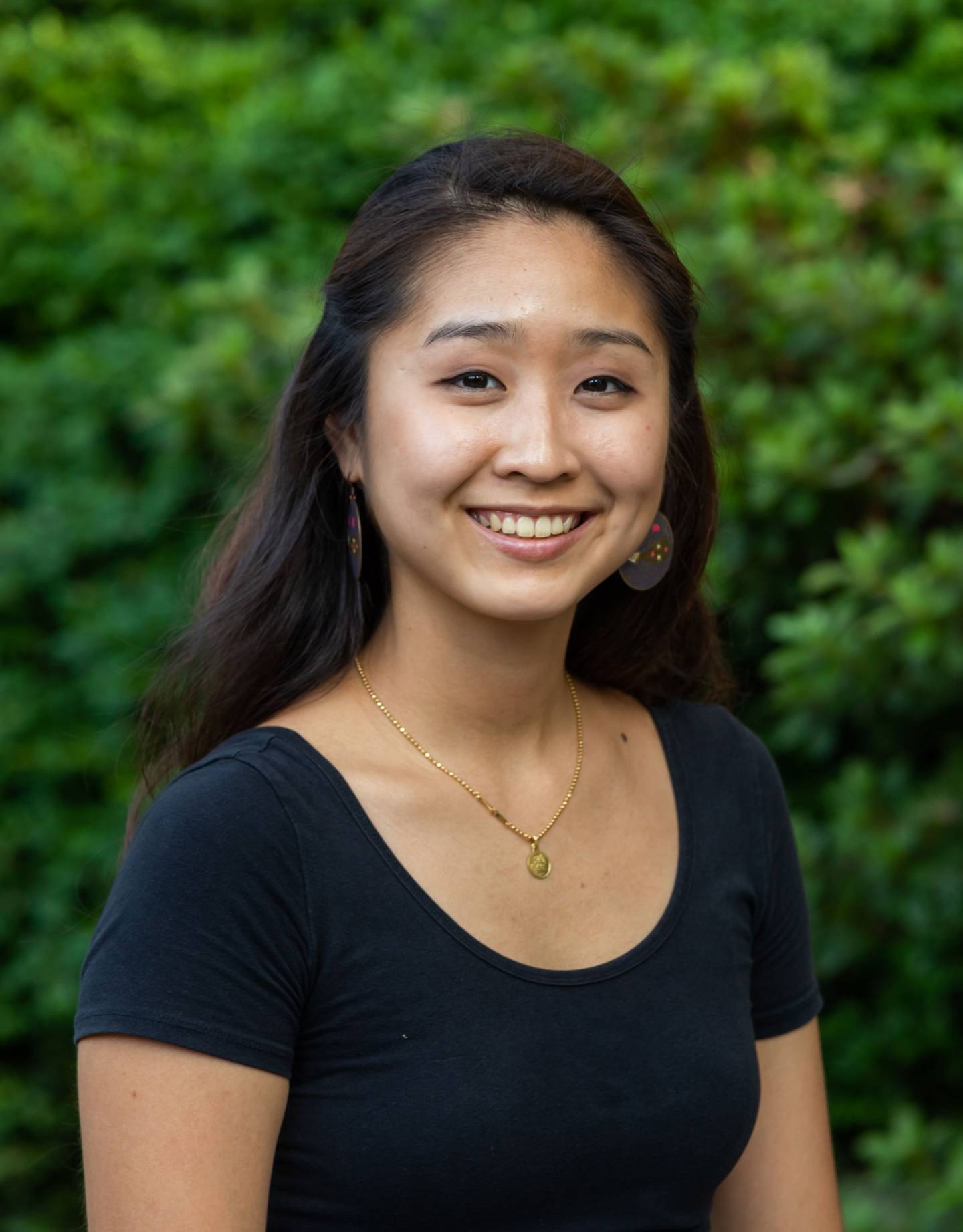 Kang proposes to use her Sachs Scholarship to pursue two master’s degrees at Oxford, one in comparative literature and critical translation, and another in environmental studies.

Kang, of South Korea and Hong Kong, is concentrating in Spanish and Portuguese and has received the department’s top honors for her junior paper and excellence in course work. She also is  pursuing certificates in Latin American studies, environmental studies and creative writing.

“As a Spanish and Portuguese concentrator, student journalist and campus leader, I’ve devoted my education to bridging the physical and imagined places we can all call home, and this a mission I seek to continue at Worcester College with the support of the Sachs fellowship,” Kang wrote in her personal statement.

Kang is a recipient of the University’s Shapiro Prize for Academic Excellence. She is a residential college adviser in Forbes College and co-president of the University Press Club, as part of which she has written for publications including TIME, The Nation and Vox. She also is a dancer with Raqs, Princeton’s student belly dance company.

“Like Daniel Sachs, I want to approach my continued education as a path to meaningful change,” Kang wrote. “In that vein, I foresee myself using my education to work as a multi-genre author that explores environmental issues in her writing, in addition to the related themes of belonging and transnationalism. Whether as a foreign correspondent or as a translator-writer working in an academic setting, I want to be a leader in the field of cross-cultural communication who uses the intangible aspects of the humanities to inspire tangible changes in areas like policy.”

Kang’s senior thesis is a joint work for the Department of Spanish and Portuguese and the Program in Creative Writing, advised by Associate Professor of Spanish and Portuguese Christina Lee and Professor and Director of Creative Writing Jhumpa Lahiri. She is writing a critical translation of two works by the Indigenous Brazilian author Daniel Munduruku, which have never before been translated into English. As a third component to her thesis, Kang is also writing a narrative nonfiction piece that will attempt to illustrate her engagement with the Portuguese language and the themes in Munduruku's work in a creative way.

“Jimin is an independent thinker, with endless energy, very hard-working, focused, and one of the most disciplined students I have ever advised at Princeton,” Lee said. “She has an insatiable intellectual curiosity, an open-mindedness to understanding different points of views, and an unparalleled ability to listen to and dialogue with others.”

Kang has dedicated much of her time at Princeton to community service. She was a John C. Bogle '51 Fellow in Civic Service her first year, a Service Focus member her sophomore year and a Service Focus mentor her junior year, helping lead the Food and Farming cohort. She served on the John H. Pace Jr '39 Center for Civic Engagement’s student advisory team that helped develop Service Focus, which bridges classroom learning and service.

Before her first year on campus, Kang spent nine months doing service work in Brazil through Princeton’s Novogratz Bridge Year Program, which she said “informed much of my University career in ways both surprising and wonderful.”

“Today, when I mentor younger students in charting their paths at Princeton, I always emphasize that community is what matters most: it is what reminds you of your consoling smallness when the world feels overwhelming, and your abundance when you don’t celebrate yourself enough,” Kang wrote. “In this spirit, it would be an honor to continue growing intellectually and personally with the support of Princeton — an institution where I’ve met some of my most important mentors and friends— within a new community where I hope to gain new skills to better serve the world.” 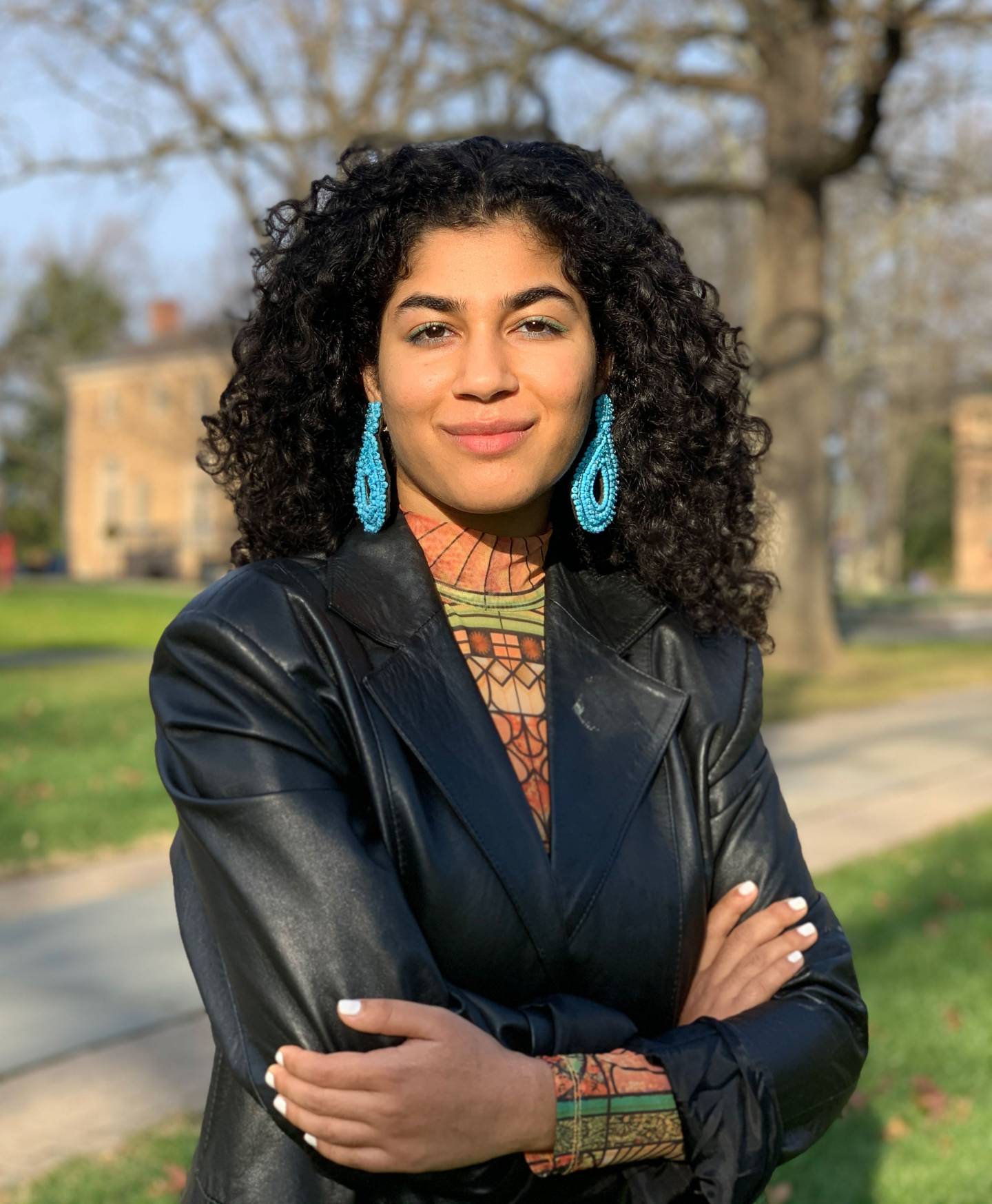 Tahir, of Alexandria, Virginia, is concentrating in African American studies and pursuing certificates in South Asian studies, journalism, and gender and sexuality studies.

Tahir plans to spend the first year of her Sachs Global Scholarship researching multi-generational feminist movements in India and Pakistan and the second year pursuing development studies at SOAS University of London.

“After my Sachs Scholarship experience abroad, I hope to return to the U.S. and continue to find ways to bring overlooked experiences to the forefront of public conversation,” Tahir said. “As a low-income, first-generation student with a Princeton degree, I realize there is a disconnect between academia and the groups often reduced to our citations and margins. Whatever my profession — be it journalism, activism, research or law — my work will involve centering the experiences and struggles of marginalized groups.”

Tahir said her interest in feminism in South Asia was shaped by her childhood and her studies at Princeton. She moved from Pakistan to northern Virginia when she was 7 and returned to the country in summer 2018 to conduct a research project through Princeton’s Martin A. Dale Summer Award.

“Two summers ago, I went back to Pakistan. I met female activists, artists and scholars who were fiercely dedicated to creating a country where gender didn’t dictate their access to opportunities,” Tahir said. “The world had no idea that such complex, impassioned feminist protests were occurring in Pakistan. The homogenous narrative of South Asian women as victims … persisted in the West despite the existence of a robust, diverse collective of multi-generational feminist movements. My need to tell their stories grew.”

Joshua Guild, associate professor of history and African American studies, said he has no doubt that Tahir “will make a significant impact on the world.”

“Inquisitive, empathetic and determined, she combines a sharp analytical mind with an abiding commitment to equity and social justice,” Guild said. “She is a driven, self-motivated student who excels in both independent and collaborative environments. The dynamic combination of her academic background, personal experiences and wide-ranging civic engagements has equipped her with the tools necessary to make the most of the unique opportunity afforded by a Sachs Scholarship.”

At Princeton, Tahir has served as a counselor for the Princeton Summer Journalism Program and was an intern at The Jewish Daily Forward through Princeton’s Internships in Civic Service (PICS) Program. She currently works as a research associate for the Ida B. Wells Just Data Lab organized by Professor of African American Studies Ruha Benjamin.

She has been an activist for issues such as affordable housing, prison abolition and Title IX reform. Her senior thesis examines Black prisoner organizing and solidarity movements within prisons during the 1970s in California.

Through the Sachs Scholarship, Tahir will study how the 1947 partition of Pakistan from India affected women, in particular women who were victims of sexual violence during this tumultuous time.

“I will travel to India and Pakistan and interview three generations of women, from those who survived partition to the feminists of today,” Tahir said. “I will tell their stories not only in English, but also in Urdu, my first language, so they are more widely accessible. My aim is to create an online archive of stories, and eventually a book, that illuminates the complexities of feminist movements in the two countries.”

During her second year at SOAS, Tahir plans to study in the  South Asian Institute and Centre for Gender Studies and conduct research on issues related to caste, religion and borders in South Asia.

“I will apply my experiences from the previous year to think theoretically about the lasting implications of partition on women, and what role that plays in shaping modern-day India and Pakistan,” Tahir said.

Tahir said her ultimate goal is to help tell the stories of marginalized people.

“Storytelling matters. It matters in journalism. It matters in activism and academic research,” she said. “It allows us to ask better, more empathetic questions, and it moves people to change.” 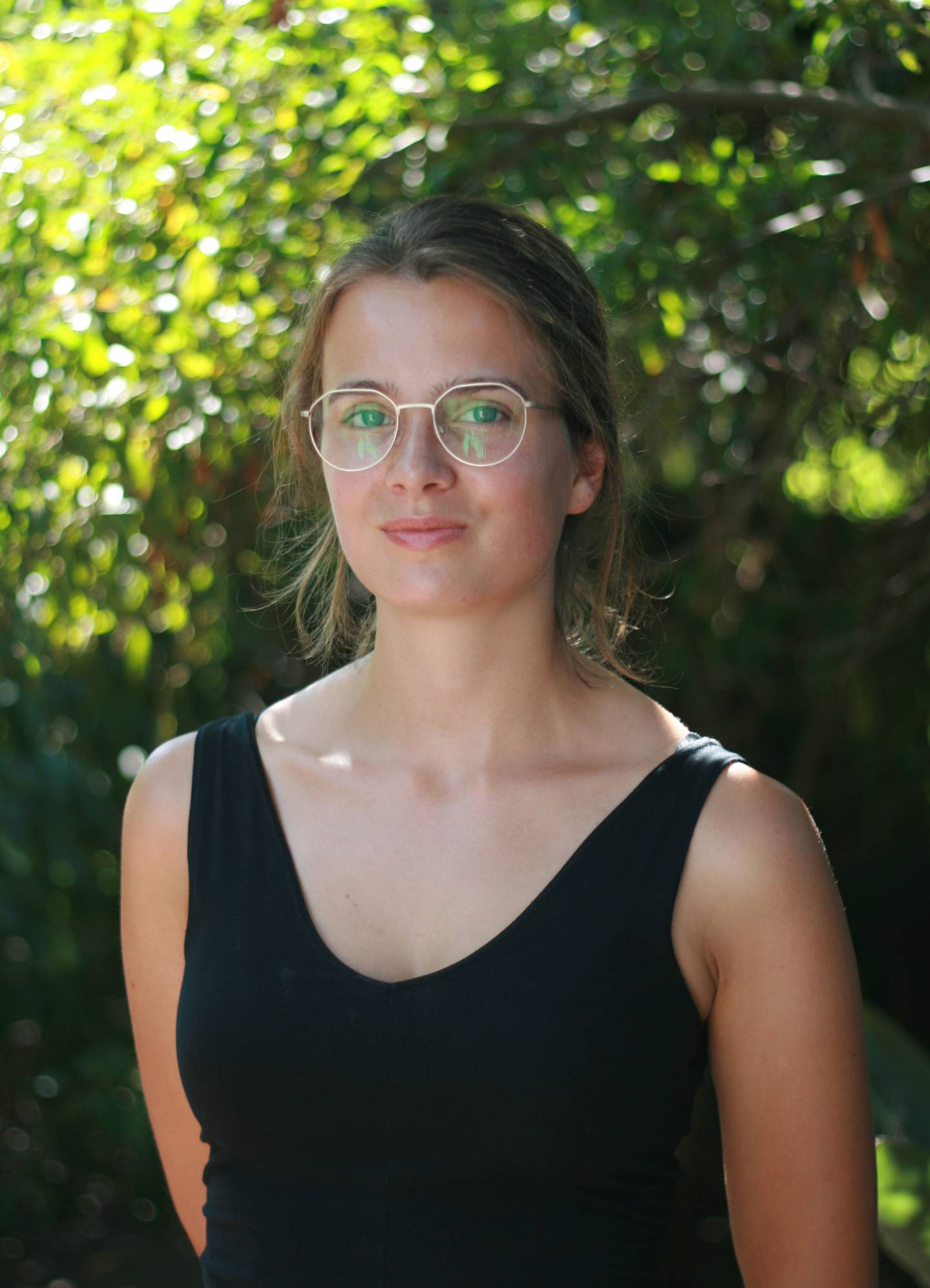 Duffus proposes to use her Sachs Scholarship to study English as a visiting student at Princeton’s Graduate School. She is a scholar of environmental humanities, focusing on fiction related to wildfires.

“The vibrant culture of environmental humanities across Princeton, spanning research, education and outreach …  convinces me that it is the optimal setting in which to undertake [my] project,” she said. “A year spent in this dynamic environment would provide the foundations for not only my post-graduate research, but also my aspired career at the interface of academia and public policy.”

Duffus is from Terang, Victoria, in Australia and earned a bachelor’s degree in history with a minor in human rights from Monash University in Melbourne. She is now spending a year of intensive study in comparative literature at Oxford through the prestigious Provost’s Scholarship.

Stewart King, deputy head of the School of Languages, Literatures, Cultures and Linguistics at Monash University, wrote in a letter of recommendation that Duffus “cares deeply about human rights and social justice, especially in the developing world.”

“Ms. Duffus is a passionate advocate for research that bridges that gap and that benefits people beyond academia,” King wrote. “Over her short career, Ms. Duffus has impressed me like few students before.”

At Oxford, Duffus is working on a thesis concerning Australian wildfire literatures of the Anthropocene.

“While fire has tremendously increased humans’ power to manipulate the planet for good or ill, it now threatens to be our undoing,” Duffus said. “My specific interest in wildfire is rooted in my own life experiences, and the welfare of my community. Since my first years of schooling in [a] small country town … the area around my home has become increasingly fire-prone due to the impacts of climate change. As I have flourished at university, I have watched my home ecology atrophy as rains dry up, landscapes dry out and average temperatures steadily climb.”

As a visiting Sachs Scholar at Princeton, Duffus plans to expand research on wildfires from her home country to the western United States.

“Wildfires (and their representation in literature) pose complex problems requiring comprehensive solutions, for which the Princeton Graduate School is the ideal incubator,” Duffus said. “My own work on ‘wildfire literatures’ … asks how fictional representations of wildfire can help us respond to this seemingly uncontrollable force. It mobilizes literature as a tool for making stronger decisions – whether in a split-second, or for the sake of future generations – in response to wildfire.”

In addition to her studies, Duffus has served as managing editor of “Reinvention: An International Journal of Undergraduates Research” at Monash University and the University of Warwick. She also was student director of an international research conference at Monash showcasing the research of undergraduates from eight countries. She previously spent a summer in the United States as an intern with the New York office of the Global Centre for the Responsibility to Protect, a human rights research and advocacy organization working to end mass atrocity crimes.