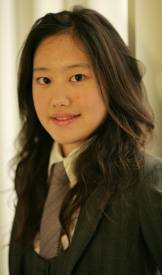 Senior Pauline Yeung has been named the recipient of the 2008 Daniel M. Sachs Class of 1960 Graduating Scholarship.

The award, one of the highest honors given to Princeton undergraduates, was established in 1970 to provide a senior with the opportunity to study, work or travel abroad after graduation. It will fund Yeung's tuition and living expenses at Worcester College at the University of Oxford, where she plans to pursue a master's degree in global governance.

An international student from Hong Kong, Yeung is an A.B. candidate in the Woodrow Wilson School of Public and International Affairs, where she has explored her academic interests in international relations, transnational legal processes, and the rise and fall of great powers as well as global film, art and culture. At Oxford she plans to continue her work in global legal governance and transnational constitutionalism, while also developing her newer research interests in financial and economic governance, looking at the global consolidation of stock exchanges, the rise of sovereign wealth funds, the regulation of private equity, and the trade and monetary regulation of emerging markets in the world economy.

"I envision my career to be one with a global footprint that eventually allows me to contribute to a rule-based international order that integrates existing and rising powers and promotes universal values amid diversity and tolerance of local cultures," she said.

Classmates and friends established the scholarship in memory of Daniel Sachs, who starred in football and lacrosse at Princeton before attending Oxford's Worcester College as a Rhodes Scholar. He died of cancer at age 28. The award is given to the senior who best exemplifies Sachs' character, intelligence and commitment, and whose scholarship is most likely to benefit the public.

Fluent in Cantonese, Mandarin, Korean and Japanese, Yeung has served as chair of delegations to the United Nations in Geneva, New York, Tokyo, Florida and Beijing, and as the master of ceremony for a live broadcast of a dialogue session between 2,500 Chinese students and Yang Liwei, the first Chinese astronaut in space. She also has served as co-chair of the Princeton Law and Public Affairs Undergraduate Forum and leads the Wilson School's policy conference on "The Rise of China." She has been a member of the editorial board of The Daily Princetonian and has served as tournament director for the Princeton Mock Trial Association.

"She is among the very best students I have taught in my nearly 30 years of university teaching," said Robert Hutchings, diplomat in residence at the Wilson School. "She has an excellent academic record, amazing language skills, and interests that range from debate and journalism to film and opera. In all these activities, Pauline has demonstrated that rare combination of intellect, creativity and drive that one finds in a future leader."

"Pauline looks at Asia from a broad perspective," said Gilbert Rozman, the Musgrave Professor of Sociology. Rozman taught Yeung last year in his "Strategic Asia" class, which analyzed the recent evolution of strategic thinking in Northeast Asia. "She makes far-reaching comparisons on important issues, and brings class discussions to a higher level by using her deep reservoir of knowledge. She has a contagious enthusiasm for what she's doing."