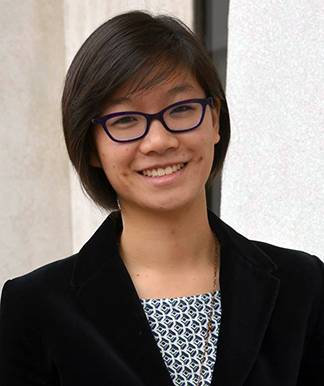 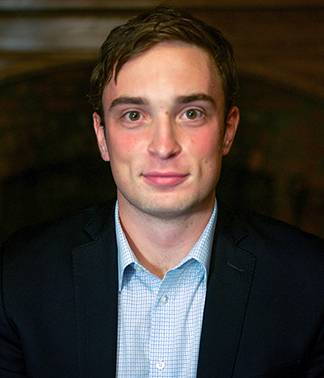 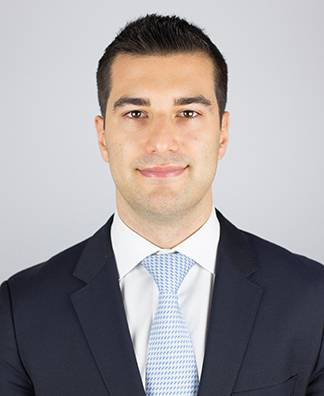 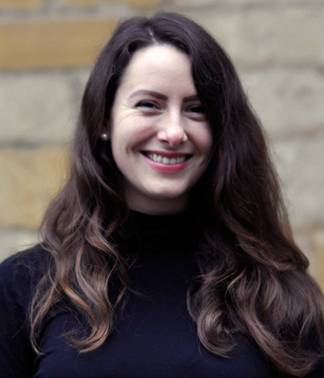 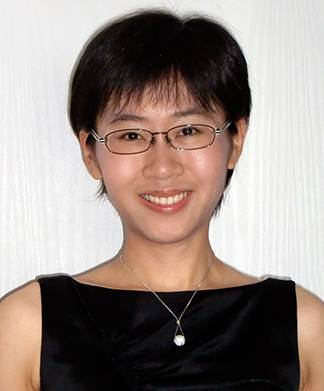 For its first class, 111 scholars were selected from around the world. The scholars will study economics and business, international studies, and public policy. The courses will be taught in English by professors from Tsinghua as well as visiting scholars and will start in August. Cultural immersion and travel also are key elements of the scholarship. Blackstone co-founder Stephen Schwarzman founded the program and the scholars will be housed on the newly constructed Schwarzman College on the Tsinghua campus.

Ella Cheng, a concentrator in the Woodrow Wilson School of Public and International Affairs who is from Jamaica, New York, will focus her studies on public policy.

In her application for the scholarship, Cheng, who is also pursuing a certificate in values and public life, wrote, "I aim to become an international human rights lawyer or diplomat who forges new dialogues between East and West about human rights."

The child of Chinese immigrants, Cheng went to China for the first time in summer 2013 through the Princeton in Beijing program to study Mandarin. The experience deepened her interest in returning to study in China to learn about institutional and governmental practices and help prepare her for a "field as complex as international human rights."

On campus, Cheng has held numerous leadership roles. She is president of the Undergraduate Student Government and has co-chaired the Student Life Committee and served as senator for the Class of 2016. She was vice president of the International Relations Council and director of communications and Web development with Princeton Business Volunteers. She has served as secretary of the Asian American Students Association. She was an undergraduate associate with the Program in Law and Public Affairs and a staff writer with The Daily Princetonian student newspaper, among other activities.

"Ella is a real leader," said Robert Keohane, a professor of public and international affairs in the Wilson School. "I have had conversations with her about her presidency of the student government, and have consistently been impressed by her thoughtfulness about the many-faceted issues of leadership that she faced."

At Princeton, Cheng has been awarded the Charles Plohn '66 Scholarship for senior thesis research and the Shapiro Prize for Academic Excellence. She has received an Asian Women in Business Scholarship and a Whig-Clio Summer Fellowship. She is a student consultant at the New Media Center and has been a research assistant at the Bobst Center for Peace and Justice as well as a tutor at the McGraw Center for Teaching and Learning.

Tyler Rudolph, a major in operations research and financial engineering from Fort Collins, Colorado, began his Chinese studies as a high school student, when he lived with a host family and attended a school in Anshan, China, for three months.

As a Princeton student, Rudolph has sought several international opportunities. He participated in the University's Bridge Year Program, which provides incoming freshmen with the opportunity to defer enrollment for a year to engage in University-sponsored community service abroad. Based in Varanasi, India, he volunteered with World Literacy of Canada to overhaul a library system. He also became fascinated by the country's emerging entrepreneurial environment, an experience that sparked his interest in studying innovation in China.

"Living and studying at Tsinghua would provide an unrivaled opportunity to dig into the business and entrepreneurial environment in China," Rudolph wrote in his application. "Being a Schwarzman Scholar would give me the transnational relationships, the cultural know-how and leadership capabilities to harness China's immense potential to innovate."

"Tyler is an inquisitive problem solver with an incredibly sharp mind and great organizational abilities," said John Luria, director of the Bridge Year Program. "In India, his capacity to listen carefully and respond thoughtfully engendered a level of trust and respect with co-workers, community members and his fellow Princeton students that served him quite well; and I am certain that this leadership quality will prove key as he continues to work in the developing world."

In summer 2013, Rudolph participated in the Princeton in Beijing program. The following summer, as a Fung Scholar, he studied at Hong Kong University and had an internship in Shanghai with SAIC Motor Corp. In 2015, he was an investment banking summer analyst at Credit Suisse. Rudolph also is pursuing a certificate in finance at Princeton.

Rudolph has held various leadership roles at Princeton. He volunteered with Engineers Without Borders, including spending a month in Sierra Leone, and has led Outdoor Action trips for Princeton students. He is president of Cap and Gown Club.

Lucas Briger, who graduated in 2012 with a degree in history, lives in London and works as director of business development for a natural resources company focused in energy that focuses on renewable power projects, principally in Africa, and clean technology commercialization. Previously, he worked as an analyst for a private equity company in New York.

"The Schwarzman Scholarship promises to be a unparalleled vehicle for deepening international understanding of China and its role in the world," said Briger. "In and of itself, the program is an opportunity of a lifetime in this respect. My professional and personal interests in international development and foreign relations, both areas in which China is increasingly critical, provided further motivation for my application. In terms of my present work, China is among the largest and indispensable actors in sustainable energy and African development. Hence, during my time at Tsinghua University and as a lifelong Schwarzman Scholar, I hope to broaden my China knowledge and relationships for their own merit, but also to draw upon in the future in forging partnerships to realize projects and technologies of profound socioeconomic impact, across the private and public sectors."

At Princeton, Briger volunteered as a Community Action leader and wrote for The Daily Princetonian and the American Foreign Policy journal. He also was involved with the Liechtenstein Institute on Self-Determination. He worked abroad at the European Commission in Brussels, Belgium, and in Rio de Janeiro, Brazil. He also worked for his Connecticut congressman in Washington, D.C.

Anastasya Lloyd-Damnjanovic, a member of the Class of 2014 from Los Angeles, concentrated in politics. She is completing the second year of an MPhil in international relations at the University of Oxford as a recipient of the Daniel M. Sachs Class of 1960 Graduating Scholarship, one of the highest awards given to Princeton undergraduates.

In her application to the Schwarzman Scholarship, Lloyd-Damnjanovic wrote that she was motivated to gain "exposure to the perspectives of emerging, non-Western powers" and to pursue leadership training.

"Given the clear importance of China's rise for U.S. interests in the 21st century, I am especially keen to familiarize myself with Chinese views on China's national trajectory and prospects for cooperation with the United States," she noted.

"I have taught at Oxford for 20 years and work with a lot of very bright students," said Neil MacFarlane, the Lester B. Pearson Professor of International Relations and Fellow at Oxford, who is supervising Lloyd-Damnjanovic. "Anastasya is one of the best. Unlike many who seem obsessed by theoretical and methodological minutiae, she has an acute understanding of policy challenges arising in international relations and U.S. foreign policy, not least those emanating from China's rise. She is also committed to working to manage or resolve those challenges."

"More than an outstanding student, Anastasya is a natural leader who remains uncommonly dedicated to shaping her work in a way that will serve the public good," said Matthew Stewart, chair of the Daniel M. Sachs Class of 1960 Scholarship and a member of the Class of 1985.

Lloyd-Damnjanovic was awarded the Shapiro Prize for Academic Excellence in 2012. She was a fellow of the Behrman Undergraduate Society of Fellows and served on its steering committee. She was a fellow at the University's Writing Center and was an editor and reporter for The Daily Princetonian.

Yung Yung (Rosy) Yang, of Hong Kong, graduated from Princeton in 2013. She concentrated in the Wilson School and earned a certificate in East Asian studies.

Yang is a research executive in the Chief Executive's Office of the Hong Kong government.

As a Schwarzman Scholar, she is interested in learning more about China's international relations and domestic policies for professional reasons and out of her commitment to public service.

"One year of study in Beijing will give me direct exposure to the core of China, and working together with some of the world's best faculty and students will challenge me to see policy issues from fresh angles," Yang wrote in her scholarship application. "Eventually, I hope to contribute to public service in the greater China area."

"The Schwarzman Scholars Program seeks future leaders and the admissions committee made a very good decision in admitting Rosy Yang," said Thomas Christensen, the William P. Boswell Professor of World Politics of Peace and War and professor of politics and public and international affairs who co-directs the Princeton-Harvard China and the World Program."Rosy has a keen intellect and is fully dedicated to public service. I had the privilege of being her senior thesis adviser. Her thesis was brilliant, uncovering the challenges to social and political stability in Hong Kong long before the more recent protest movements that grabbed headlines around the world."

As a Princeton student, Yang studied at Oxford for one semester and participated in the Princeton in Ishikawa program over a summer to study Japanese.

In 2012, Yang was elected to the Phi Beta Kappa academic honor society. In her  junior year, she received the R.W. van de Velde Award from the Wilson School in recognition of her performance in the policy task force "The Protection of Minority Rights in the European Union." She received a Shapiro Prize for Academic Excellence in 2011.

Beyond the classroom, Yang was news and culture director of WPRB, the student-run radio station, and was the media relations director of the Princeton chapter of Global China Connection. She also was a study abroad peer adviser and helped run the Princeton Hong Kong Students Association.

Over the years, Yang has volunteered in numerous capacities in Hong Kong and is a volunteer ambassador with the Asia Society Hong Kong Center.