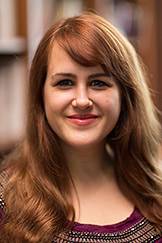 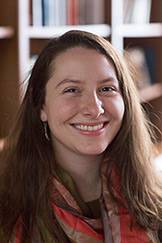 Two seniors with track records of achievement in academics, research and the arts have been named recipients of the Daniel M. Sachs Class of 1960 Graduating Scholarship, one of the highest awards given to Princeton undergraduates.

Katie Dubbs, an art and archaeology major who is also pursuing a certificate in urban studies, has been awarded the Sachs Global Scholarship, which will support a year of study in Vienna. Combining research and performance, Dubbs will examine late-19th-century Viennese classical music known as art song or "lieder."

Anastasya Lloyd-Damnjanovic, a politics major, will spend two years pursuing an MPhil in international relations as a Sachs Scholar at Worcester College, the University of Oxford.

Dubbs, of New York City, will study at the Vienna Conservatory, be mentored by artists at the Vienna National Opera and prepare a "liederbuch" — one complete series of art songs — giving recitals and postconcert discussions about the performance history and contemporary relevance of the art song.

By immersing herself in the study of lieder, which is almost never performed in the United States, she said she hopes "to change the perception in the U.S. that classical music is elitist and archaic and reconsider how classical music can be more successfully created and produced in this country."

As a recipient of Princeton's Peter B. Lewis Award, which funds an international arts pursuit extending a student's passion from the university environment, Dubbs worked with Streetwise Opera, a London-based opera company that "gives homeless people a voice" by teaching people how to perform opera and help stop the cycle of homelessness in the U.K. through the arts.

Stanley Katz, a lecturer with the rank of professor in public and international affairs in the Woodrow Wilson School of Public and International Affairs, praised her academic achievements and called Dubbs "a cultural entrepreneur," recognizing her commitment outside the classroom as a singer, including her involvement in opera at Princeton.

"The Sachs is a fitting recognition both of her enormous talents and of her substantial contribution to the cultural life of this great institution," said Katz, who is also director of Princeton's Center for Arts and Cultural Policy Studies.

"Lieder consists of vivid descriptions of brief emotionally charged moments, without costume or set," Dubbs said. "I believe that they are the future of opera and classical vocal performance, and attempting to understand and communicate lieder will shape the trajectory of my career as an international arts leader and advocate."

At Princeton, Dubbs' immersion in the arts also extends offstage. She has served as arts representative of the University Student Government's Student Groups Committee and as programs chair of the board and tour guide at the Princeton University Art Museum. She is curator of the Butler College art gallery and a Butler College peer academic adviser to arts students.

Lloyd-Damnjanovic, of Los Angeles, will receive an intensive introduction to recent world history in her first year as a Sachs Scholar. In her second year, she plans to focus on the international relations of the Middle East and Russia.

She said she is particularly interested in "the implications of Islamist parties' rise for democratic consolidation in Arab countries, Russia's use of its dominance in oil and natural gas markets as a foreign policy tool, and the evolution of Russian foreign policy since the Cold War.

"I hope to free myself of national biases inherent in my thinking about other countries' intentions and to understand how the United States' pursuit of its strategic interests is perceived by our traditional allies and rising powers alike," she added.

Looking ahead, Lloyd-Damnjanovic plans to focus her career on working for the U.S. government as a diplomat or foreign policy adviser "to ensure that our foreign policies are strategically sound in the long term and respectful of other states' aspirations," she said.

"I have known Anastasya for two years, and all I can say is she is a delight to work with," said Ezra Suleiman, the IBM Professor in International Studies and professor of politics. "She is very bright, always engaging in discussions, and always considerate.

Outside the classroom, she has served as head fellow of the Princeton Writing Center. A news editor and senior writer for The Daily Princetonian, she has received the publication's Class of 1961 Newspaper Writing Award.