Photo of Koltunyuk courtesy of RCM, photo of Buzard by Yao-Wen Yeh

Princeton junior Darya Koltunyuk's morning routine took a new turn this past fall. Instead of grabbing something to go from Whitman College's dining hall, she enjoyed a leisurely walk from her London flat — through Hyde Park and past the gilded gates of Kensington Palace — to the Royal College of Music (RCM).

A collaboration established between Princeton University and RCM in 2007 offers Princeton students the opportunity to spend the fall semester of their junior year at the prestigious conservatory. Sixteen students have participated in the program, which provides rigorous professional training within a liberal arts framework and is offered as part of Princeton's Study Abroad Program. Students may audition in the spring of their sophomore year.

"Students return with phrases like 'life-changing' on their lips," said Michael Pratt, director of Princeton's Program in Musical Performance. "The experience allows for intensive dedication to music under the caring mentorship of a top-flight faculty and in the larger context of the world's most vibrant music town."

Koltunyuk, a pianist who is practicing for the national Chopin competition to be held in 2015, was thrilled with the opportunities RCM presented, including private lessons with Edna Stern, a Paris-based pianist who is particularly focused on the works of Chopin.

"It was extraordinary to listen to her demonstrate pieces on the piano, very powerful, very moving," said Koltunyuk, who performed Chopin's Piano Concerto No. 1 in E Minor as the 2012 winner of two concerto competitions — Princeton University Orchestra and the New York Chamber Orchestra. In spring 2013, she performed the entire concerto in Princeton University Chapel, broadcast live on the classical radio station WWFM.

Senior Katherine Buzard, a soprano, said her semester in London "gave me time to focus on my technique and musicianship skills without the burden of a Princeton course load — and the confirmation I needed that I was capable of pursuing a career in singing."

Joseph Gotoff, a 2011 alumnus, studied cello at RCM. "I sometimes joke that my semester abroad was my best semester at Princeton. It truly helped me to reevaluate and take charge of my life," he said.

Living the musical life in London

At RCM, Koltunyuk immersed herself in the musical life of the college, London and beyond.

She practiced four to six hours a day, often rising at 3 or 4 a.m. to reserve a grand piano on the school's online booking system. "There are dozens of pianos at RCM but only about 20 grand pianos," she said. "Those had a view of Royal Albert Hall. It was so inspiring." 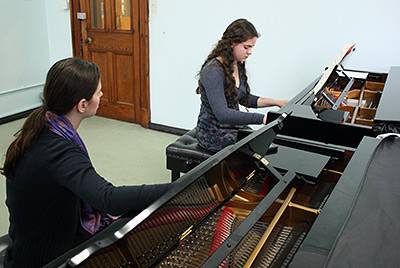 Koltunyuk, a comparative literature major who is also pursing a certificate in musical performance, particularly enjoyed a course on music and literature. She also took a class on aesthetics and musical criticism taught by a classical music critic and RCM alumnus. For her final project in another class, Koltunyuk found a video of hand drumming on ice in Siberia and transcribed it by devising her own notation — a written system of representing notes of music.

She also enjoyed a rich social life, making new friends from London and all over the world. "After aesthetics class, a group of us would go to the canteen and have a cup of coffee, and discuss everything from British lingo to contemporary opera to recommendations for upcoming concerts," she said. Koltunyuk also spent time with the two other Princeton students at RCM while she was there; Vivien Cheng and Casey Kolb.

A highlight for Koltunyuk was attending classical concerts at Queen Elizabeth Hall and other London venues. She literally danced with excitement outside the Royal Ballet's box office when she got tickets to her favorite ballet, "Don Quixote," which she attended with her friend Princeton junior Cosette Gonzales, who was studying creative writing at University College London.

Koltunyuk also took the opportunity to travel to Scotland and Paris, and performed as an accompanist to a family friend, a cellist, in Spain.

She said her experience at RCM "confirmed that I do want to devote myself to music." At the end of the fall term she passed a juried examination that qualifies students for early admission to the conservatory's master's program after graduation from Princeton.

A world of musical opportunities back at Princeton

Both Koltunyuk and Buzard discovered an abundance of performance opportunities when they returned from London.

In the first two weeks of the new semester, Koltunyuk has already performed twice as a member of the Princeton Pianists Ensemble: in a pre-concert recital for the Danish String Quartet, presented by the Princeton University Concerts (PUC), and at the "Piano Battle: Harvard vs. Princeton." Her junior recital will take place on March 28. She will also perform with flutist Alison Beskin, a 2013 alumna, on April 12.

In addition, Koltunyuk runs the classical music hour — a group that hosts informal concerts on Fridays in Rockefeller College Common Room — and is an accompanist at Princeton Ballet School in Princeton.

"Princeton has given me more performance opportunities than most undergraduates at conservatories could even dream of," said soprano Buzard, a concentrator in music who is also pursuing a certificate in musical performance. 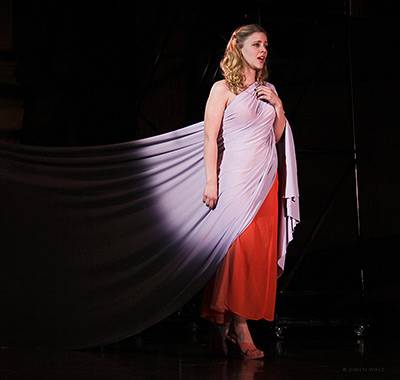 Buzard sings the lead role in Monteverdi's "The Coronation of Poppea" with the Princeton University Opera Theater a year after her semester at RCM. (Photo by Owen Walz)

In January, she sang the lead role in Princeton University Opera Theater's production of Monteverdi's "The Coronation of Poppea."

"I'm certain that Katherine's experience at RCM gave her a platform that she would not have otherwise had to tackle a demanding role such as Poppea," said Pratt. "Her performance was as brilliant, passionate, subtle and complete as I have seen by a Princeton student in my almost 37 years here."

Buzard's senior certificate recital, a program of selections by Purcell, Mozart, Strauss, Britten, Howells and others, will take place on Feb. 21. She will perform a solo in the Princeton University Glee Club concert on Feb. 28 and will give a pre-concert recital before mezzo-soprano Joyce DiDonato's March 27 performance presented by PUC.

On April 11, Buzard will perform with Musica Alta, a student early-music ensemble, and on April 26 she will join Gabriel Crouch, senior lecturer in music and associate director of the Program in Musical Performance, and his early Renaissance choral group Gallicantus, also presented by PUC.

"Every student at RCM knows that hundreds of singers, from Thomas Allen to Joan Sutherland, have passed through those same practice rooms on the way to great careers," said Crouch. "Katherine came back to us knowing that she rightly belongs among this next generation."

Buzard, who said she applied to Princeton "as a shot in the dark because of the RCM opportunity and the University's amazing financial aid program," is also a member of the Princeton University Glee Club and the Chamber Choir. She is currently applying to conservatories for graduate school.

On the road to a professional career in music

After graduation from Princeton, Gotoff earned a master's in music at the Mannes College of Music in New York City and is now a doctoral candidate in cello performance at the New England Conservatory of Music. An ecology and evolutionary biology major, he originally intended to apply to medical school and chose Princeton over a conservatory because he was afraid he couldn't "make it" as a cellist. 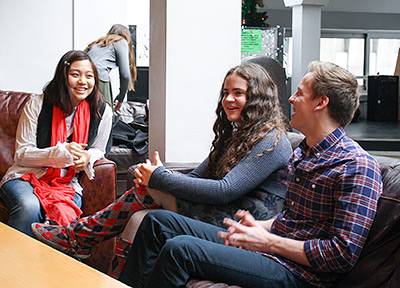 Koltunyuk (center) enjoys a break at RCM with fellow Princeton students in the program, Vivien Cheng and Casey Kolb. (Photo courtesy of RCM)

"Princeton was a place where I could fuel my academic pursuits while still maintaining my love for music and playing at a high level," he said. "My time at RCM was completely life-changing, in that it helped me get over my fear of failure at being a musician and get on with actually becoming one."

To apply for the program, students must be music majors or get permission from their department to study music for fall of their junior year. For more information, students may contact Michael Pratt. Auditions for fall 2014 take place on March 5 and 6.