The Richardson Chamber Players -- an ensemble that pairs Princeton students and leading professional musicians -- will perform at 3 p.m. Sunday, March 28, in Richardson Auditorium, Alexander Hall. The ensemble presents works that typically are not heard in smaller chamber music settings, featuring pieces with a variety of instrumentation. The upcoming concert, "Blow Thou Winter Winds," will include works by composers Antonin Dvorak, Richard Wagner and Georg Philipp Telemann. (Photo: Brian Wilson)

The ensemble exemplifies the strength of what is known as Princeton's "underground conservatory," pairing students with accomplished professional performers who also serve as private instructors in the University's Department of Music, according to conductor Michael Pratt.

"The Richardson Chamber Players give students a chance to play side-by-side with some of the top professionals in the world," he said. "It's a tremendous opportunity for growth for them."

The Richardson Chamber Players, founded during the centennial season of Princeton University Concerts in 1994-95, perform works that typically are not heard in smaller chamber music settings. The ensemble presents three concerts annually in Richardson Auditorium, featuring pieces with a variety of instrumentation and occasional vocal performances. The number of musicians in the ensemble changes with each composition, and Pratt collaborates with the instructors to choose students and guest artists to perform with the group. 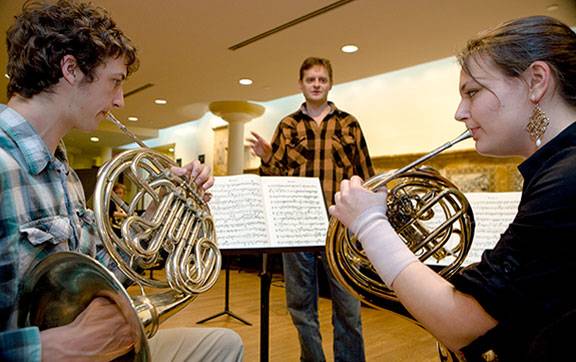 Chris Komer (center), a horn player who has performed with the New York Philharmonic and Lincoln Center Jazz Orchestra among many other professional groups, works with (from left) Princeton sophomore Isaac Julien and freshman Katherine Elgin. The Richardson Chamber Players exemplify the strength of what is known as Princeton's "underground conservatory," bringing together students with professional performers who also serve as private instructors in the University's Department of Music, such as Komer. (Photo: Brian Wilson)

Freshman Katherine Elgin, a French horn player, said she was honored, but a bit intimidated, to be selected to perform with the ensemble.

"However, after spending two hours rehearsing with the professional players, I felt incredibly welcome and comfortable," Elgin said. "I felt as if they were excited to have me there, and I was certainly excited to be there. The level of musicianship is incredible, and I have never before been able to play in such an amazing group."

Pratt said the experience of performing with the Richardson Chamber Players gives students a valuable glimpse into the world of professional musicians.

"It's a totally professional schedule. We move fast," he said. "We have only a handful of hours of rehearsal for major works, rather than several weeks of rehearsal, so they're expected to come in and be prepared to move at that pace." 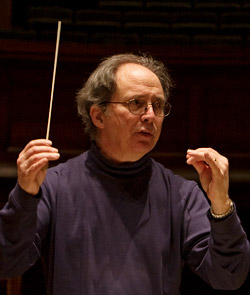 Michael Pratt, who cofounded the Richardson Chamber Players along with Nathan Randall, will conduct the March 28 performance. Pratt said the chance for students to play alongside professionals is "a tremendous opportunity for growth for them." (Photo: Brian Wilson)

In the March 28 concert, the Players will present the Serenade for Winds in D Minor, Opus 44, by Czech composer Antonin Dvorak and the "Siegfried Idyll" by German composer Richard Wagner. The Dvorak piece will be presented with a full orchestral woodwind section, minus the flute, along with cello and bass. The ensemble for the Wagner piece will include strings, woodwinds and a brief trumpet performance at its climax.

"They're both great masterpieces," Pratt said. "For the wind players, the Dvorak piece is one of their favorite chamber works. The Wagner piece was a very special piece in his life -- it was a present for his wife to thank her for giving him his son. The first performance was on Christmas Eve morning, with the players all lined up outside her bedroom, where she was awakened by the strains of this music. It's a very intimate, very beautiful, very loving, rapturous work."

"Blow Thou Winter Winds" is the second of the ensemble's three concerts this year. The final performance, "Love in Bloom," will be held at 3 p.m. Sunday, May 2.

Tickets for "Blow Thou Winter Winds" range from $10 to $20. They are available through University Ticketing or at the Richardson Auditorium box office, (609) 258-5000. 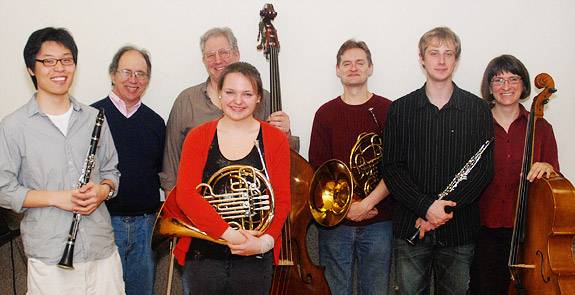 Because many of the instructors are professional musicians based in New York City, the students in the ensemble sometimes rehearse with them there. Pictured following a practice at the Ayers Percussion Rehearsal Studio in Manhattan are (from left) Princeton junior Leo Kim, conductor Michael Pratt, instructor Jack Hill, freshman Katherine Elgin, instructor Chris Komer, junior Justin Knutson and instructor Susannah Chapman. (Photo: Nathan Randall)