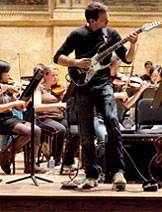 A doctoral candidate in music composition at Princeton, Mark Dancigers' source of inspiration is the electric guitar, for which he has composed more than 60 works. Dancigers will premiere a new work at Princeton in early March as part of the Princeton University Orchestra's annual program that also will feature the two undergraduate winners of its 2011 concerto competition.

Play a video of Mark Dancigers

Each of the more than 90 students in the Princeton University Orchestra has a beloved musical instrument. So too do other students of music at Princeton, some of whom relish composing music for their favorite instrument.

For Mark Dancigers, a graduate student in music composition at Princeton, his source of inspiration is the electric guitar, for which he has composed more than 60 works. Dancigers will premiere a new work at Princeton in early March as part of the orchestra's annual program that also will feature the two undergraduate winners of its 2011 concerto competition. In a video featuring Dancigers, he plays excerpts from his new work, Concerto for Electric Guitar and Orchestra. 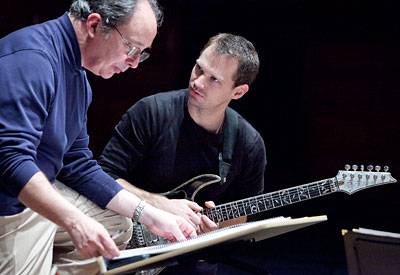 Dancigers (right) goes over the score of his Concerto for Electric Guitar and Orchestra with orchestra conductor Michael Pratt.

Under the direction of conductor Michael Pratt, this year's concerts will be held at 8 p.m. Friday and Saturday, March 4-5, in Richardson Auditorium, Alexander Hall.

About Dancigers' work, Pratt said, "Mark is part of a brilliant new generation of composers to blend music from the club and the concert hall into a vibrant stream that is revitalizing much of our concert life. Plus, he is a virtuoso guitarist." 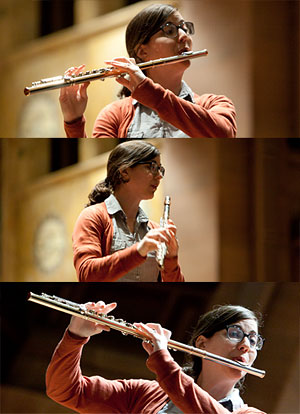 Dancigers' music has been commissioned and performed by orchestras and chamber ensembles across the United States. He also has premiered his works for the electric guitar across the United States, Canada and Mexico. Dancigers studied at Yale University and the Yale School of Music and is completing his doctorate at Princeton under Professor of Music Steven Mackey.

Anastasio, who won the concerto competition two years ago, is majoring in classics with a certificate in musical performance. In the summer of 2007 she performed at the Kennedy Center as a Presidential Scholar in the Arts and has performed at numerous summer festivals, including the Tanglewood Music Center, the Aspen Music Festival and the National Repertory Orchestra. 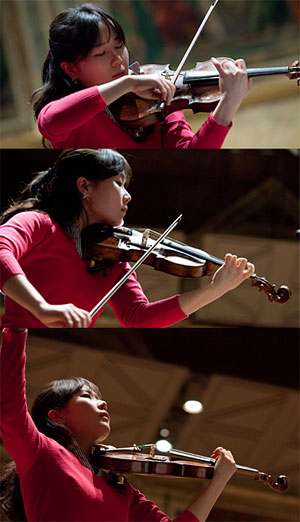 Yoon Won Song is majoring in economics and is co-concertmaster of the orchestra. She has performed in Europe and Asia, as well as the United States. In March 2004, she became the third prize laureate of the renowned International Tchaikovsky Competition for Young Musicians. In addition, she has received many awards, including first prizes at the Daily Korea Times competition, the Music Journal Competition and the Seoul Symphony Orchestra Competition. 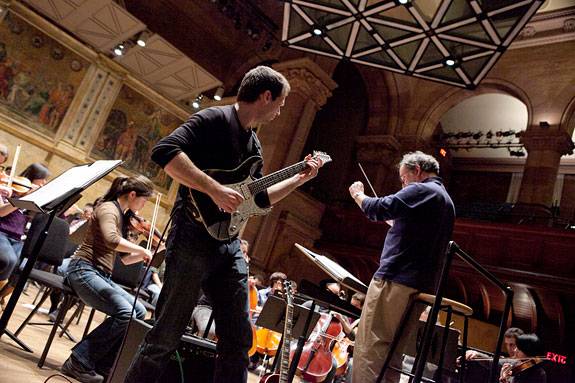 Against the backdrop of Richardson Auditorium in Alexander Hall, Dancigers joins the orchestra in musical expression.

The orchestra, which first performed on campus in 1896 with a group of professional musicians, today is made up of undergraduate and graduate students from across the academic disciplines. Being part of the orchestra is an extracurricular activity for these students, who dedicate significant time to rehearse and perform.

Tickets to the concerts are $15 for general admission, $13 for senior citizens and $8 for students. They are available online through University Ticketing or by calling (609) 258-9220.