"The pianist sits and waits in her red shoes/for the violinist to herald synchronization,/as a moth makes circles/out of the difference between darkness and light/unites them in his untraceable orbit." — Susannah Sharpless, Class of 2015

"What struck me first wasn't the music, but the silence." — Lucas Mazzotti, Class of 2017

"Marc-André is cursed. A boy of northern Floridian provenance, living on the more remote outskirts of Tallahassee, he is unable to play the music that he hears in his mind." — Trevor Klee, Class of 2015

So begin the winning entries of the Creative Reactions Contest held for the first time this spring, a new initiative of Princeton University Concerts (PUC). Marna Seltzer, director of PUC, said the annual contest is "designed to foster reflection on the impact of hearing classical music, as perceived by Princeton students."

Since 1894, PUC has presented many of the classical music world's most important established as well as emerging musicians, including violinist Isaac Stern, cellist Yo-Yo Ma, the Budapest String Quartet and pianist Vladimir Ashkenazy. Artists also engage with Princeton students during their visit to campus in activities ranging from master classes to "late-night chamber jams." Most concerts take place in Alexander Hall's Richardson Auditorium.

The 130 students who entered the contest received a free ticket to attend one of five PUC concerts and were asked to write a response. The form was flexible, allowing for blank verse, prose, poetry, narrative, even lyrics. The entries were assessed in three rounds by 11 judges, including people in the arts from the University and community.

"The pieces make clear that the music we present can and does have a profound effect on students," Seltzer said. "None of the winners had ever been to one of our concerts and, in most cases, had very little experience with classical music. I hope that this shows that one need not have any prior knowledge to attend a concert and be inspired by classical music."

Class of 2015 member Darya Koltunyuk, who was chair of the Student Ambassadors of PUC — a small group of classical music-loving students whose mission is to increase student interest and participation in PUC programs — was the driving force behind the contest. Koltunyuk, a pianist who majored in comparative literature and earned a certificate in musical performance, helped design the judging criteria and organized and promoted the contest. She will join the staff of the music department as marketing and outreach manager for the concert office in July. 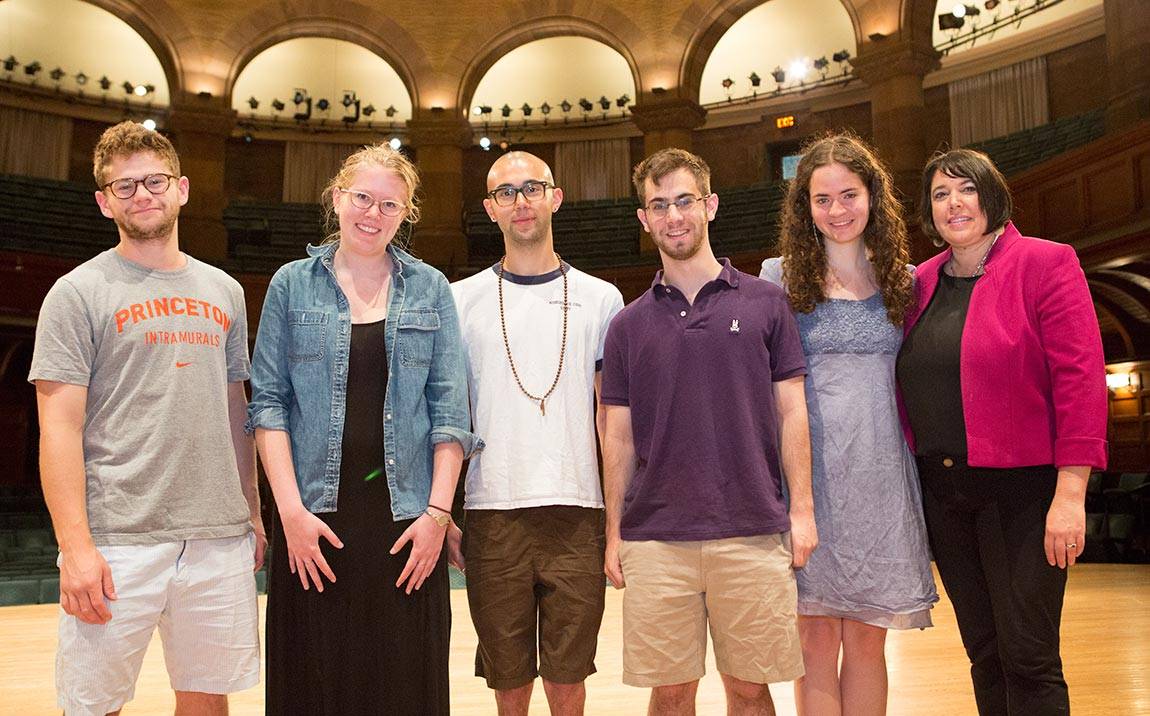 The Creative Reactions Contest, a new initiative of Princeton University Concerts (PUC), gave student participants the opportunity to attend a free concert and write a response in any form. Pictured on the stage of Richardson Auditorium in Alexander Hall are (from left) Lucas Mazotti, Class of 2017, one of two second-place winners; 2015 graduates Susannah Sharpless, first-place winner, Benjamin Goodman, honorable mention, Trevor Klee, second-place winner, and Darya Koltunyuk, chair of the Student Ambassadors of PUC; and Marna Seltzer, director of PUC. Not pictured is Rachel Stone, Class of 2015, honorable mention. (Photo by Denise Applewhite, Office of Communications)

Reconsidering 'the power of art'

First-place winner Susannah Sharpless, a concentrator in religion who also earned a certificate in creative writing, said she entered the contest for the challenge of writing for an audience not connected to a class or to her work as a reporter for the Daily Princetonian, the student newspaper.

The experience of attending the concert — one of just a few she has attended while at Princeton — changed her view of classical music.

"I had never really thought before of what it must be like to be able to pick up an instrument and play a song by heart," said Sharpless, who studied piano and cello as a child. "The breadth of these musicians' minds — their ability to memorize whole pieces and play them with feeling — really amazed me. It made me reconsider the power of art to be entirely contained in one person's head (the composer's) and then go entirely into someone else's (the musician's) and then end up somehow in mine."

"Quartet for the End of Time" by Olivier Messiaen

Sharpless initially thought she would write a personal essay when she chose to attend a concert by violinist Stefan Jackiw and pianist Anna Polonsky. Afterward, she changed her mind. "The music was so contemporary and challenging and gripping that it reminded me of the contemporary poetry I love," she said.

Jumpstarting an interest in classical music

Trevor Klee, one of two second-place winners and a geosciences major who wrote his thesis on the Earth's crust, took several creative writing classes while at Princeton. He had never attended a classical music concert before entering the Creative Reactions Contest.

"It seemed like a fun exercise to test my creative writing skills," he said. "I will definitely attend more classical concerts in the future."

Anticipating that it would be hard to understand the music — a program of Mozart, Debussy and Schubert performed by pianist Mark-André Hamelin that included an original 2014 composition by Hamelin — Klee found himself transfixed by the artist. His seat for the concert was in the far reaches of the balcony surrounded by a number of distractions. He said he found himself wanting to be transported to a place where he could be alone with the music. That was the basis for his story, which is set in Florida, where his family recently moved.

The sounds of silence

Lucas Mazzotti, the other second-place winner, who is considering majoring in the Woodrow Wilson School of Public and International Affairs, sang in high school and taught himself basic guitar a few years ago. His father, a classical music enthusiast, took him to concerts when he was young — where, Mazzotti said, he "didn't pay much attention." Today he listens to classical music while studying; the concert he attended for the contest was his first at Princeton.

His experience at Richardson Auditorium — for a performance by the Brentano String Quartet and mezzo-soprano Joyce DiDonato — was quite different from listening to a digital recording, he said. "I was struck by the silence preceding and following each piece, and by the way the musicians looked and moved as they performed." These elements of live performance inspired his essay.

Mazzotti said he expects to attend more concerts. "When you have a chance to focus solely on that music, it takes on a different character. It becomes much more expressive and humbling," he said.

Benjamin Goodman and Rachel Stone of the Class of 2015 won honorable mentions.

Audio clips excerpted with the permission of the artists for Princeton University only.