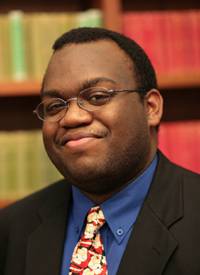 Princeton senior Dan-el Padilla Peralta has been named the recipient of the 2006 Daniel M. Sachs Class of 1960 Graduating Scholarship.

The award, one of the highest honors given to Princeton undergraduates, was established in 1970 to provide a senior with the opportunity to study, work or travel abroad after graduation. It will fund Peralta's tuition and living expenses for the next two years as he attends Worcester College at Oxford University to read for a second bachelor's degree in classics-literae humaniores. The program requires study of a combination of topics drawn from language and literature, history, philosophy and archaeology.

A resident of New York City and a graduate of the Collegiate School, Peralta is an A.B. candidate in classics. He also is pursuing a certificate in the Woodrow Wilson School of Public and International Affairs.

"I am thrilled to be named the 37th Sachs Scholar," Peralta said. "I look forward with eager anticipation to my studies at Oxford in the fall, and I hope to continue the distinguished tradition of Sachs Scholars at Worcester College. I would like to thank the Sachs advisers, for providing me with such a wonderful opportunity; my professors, for submitting recommendations on my behalf; my friends at Princeton, for keeping me sane; and my family, for their loving support."

Classmates and friends established the scholarship in memory of Daniel Sachs, who starred in football and lacrosse at Princeton before attending Oxford's Worcester College as a Rhodes Scholar. He died of cancer at age 28. The award is given to the senior who best exemplifies Sachs' character, intelligence and commitment, and whose scholarship is most likely to benefit the public.

For his senior thesis in classics, Peralta is examining four Roman stones owned by the University, re-publishing the epitaphs carved upon them and researching their historical and social context, paleography and iconography. This project will culminate in an exhibition at Firestone Library in the spring. For his senior thesis in the Wilson School, he is researching the implementation of socioeconomic integration in school districts with a history of court-supervised desegregation.

"He's a very exceptional student," said Harriet Flower, associate professor of classics, who has taught Peralta in a graduate-level seminar and is serving as his senior thesis adviser. "He's doing an original piece of research for his senior thesis, which is a pretty remarkable thing. The breadth of his interests sets him apart. For example, he's working with a marble analysis on the stones. So he's not just looking at them as historical or archaeological artifacts, he's also getting into the nitty-gritty science. There are, in fact, very few people -- even professionals -- who are crossing over like that."

Peralta's career aspirations include teaching classics at the university level. He also hopes to devote some time to work in the public policy sector of the field of education, specifically in the promotion of equal access for students from minority and disenfranchised groups.

Peralta previously was recognized for his academic achievements at Princeton with the Freshman First Honor Prize, the Shapiro Prize and the Van de Velde Prize for Junior Independent Work in the Wilson School.

He has served as a counselor and a program leader for New York City's Prep for Prep program. Before enrolling in the Collegiate School, Peralta participated in this program, which identifies talented students from minority group backgrounds and prepares them for placement in independent high schools.

On the Princeton campus, he was co-creator and co-host of "The Professor Show," a talk show on student radio station WPRB that featured interviews with Princeton faculty. He also has served as a peer academic adviser for Rockefeller College, a mentor for the Black Student Union and a board member for Acción Latina.