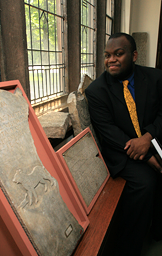 For his senior thesis in classics, class of 2006 salutatorian Dan-el Padilla Peralta studied the epitaphs on four Roman stones owned by the University and conducted a scientific analysis of the marble's composition and origins. His work was featured in an exhibition in Firestone Library. Padilla will continue Princeton's tradition of delivering a speech in Latin at the June 6 Commencement ceremony.

From a young age, Dan-el Padilla Peralta viewed the study of ancient civilizations as the foundation of his path to a better future.

When Padilla was 8, living with his family in a shelter in New York's Chinatown, he came across a copy of a guidebook to ancient Athens and Rome. He was fascinated by maps of the cities and by images of the Parthenon, togas and other symbols of a time and place so far removed from the impoverished neighborhoods where he was raised.

The book spurred an interest in the study of classics -- and of the pursuit of education in general -- that eventually led Padilla to Princeton, where his many academic achievements have culminated in his selection as salutatorian of the class of 2006. Padilla will continue the University's tradition of delivering a speech in Latin at the June 6 Commencement ceremony.

Padilla used education as a way to escape his difficult surroundings. He became involved with Prep for Prep, a New York-based program that identifies and supports talented students from minority backgrounds, and attended the Collegiate School, where he delved into the study of Latin and Greek.

Padilla visited Princeton while participating in high school debate tournaments held on campus and attended the University's annual Humanities Symposium for prospective undergraduates in October of his senior year. He decided to apply to Princeton because of the "openness with which people here participated in intellectual pursuits."

"I came from a school where the currency for socializing was this intellectual drive that everyone seemed to share. Princeton, I thought, was the most appropriate place to take that to the next level," Padilla said.

Although he came to Princeton intending to major in classics, he did consider concentrating in other departments, particularly molecular biology. But two early interactions with classics faculty members helped convince him to stick with his original plan.

In his first day of classes as a freshman, Padilla sat in on associate professor Andrew Feldherr's course on "Invective, Slander and Insult in Latin Literature" and was struck when Feldherr approached him after the class to urge him to explore the department's offerings. "That definitely stood out as something that really encouraged me to study classics, but in a broader sense to seek out and talk to faculty here," Padilla said.

As a sophomore, Padilla sent a "timid e-mail" to assistant professor Joshua Katz inquiring about the possibility of taking his graduate seminar, "Historical/Comparative Grammar of Latin." Katz welcomed Padilla into the course, and his experience there "cemented my desire to study classics," he said.

Padilla wound up taking several graduate courses in the department, impressing faculty members with his breadth of knowledge, intellectual curiosity and enthusiasm.

"He has a supple and inquiring intelligence, with an uncanny knack for sifting out the important secondary literature from the humdrum, and for spotting what really counts in any debate," said Denis Feeney, chair of the classics department, who taught Padilla in both undergraduate and graduate courses. "He is a highly gifted linguist and critic, with a phenomenal amount of independence and motivation. Above all, as with all truly outstanding students, he really loves the material and is driven to master it."

Padilla's initiative was exemplified by his senior thesis, in which he examined four Roman stones owned by the University, republishing the epitaphs carved upon them and researching their historical and social context, paleography and iconography. He also conducted a scientific analysis of the marble's composition and origins. The project culminated in a two-week exhibition at Firestone Library, which Padilla called "one of the highlights of my Princeton experience."

"It was his idea to do the scientific analysis of the stones in addition to the epigraphical analysis of the texts," said Harriet Flower, associate professor of classics and Padilla's senior thesis adviser, who expects that his thesis research will be published. "Somebody else could have written a senior thesis quite easily just about the text. … A lot of people don't even see the possibility that you could combine what you've learned in a science class with what you've learned in a classics class."

In addition to his unique classics thesis, Padilla wrote a thesis for the Woodrow Wilson School of Public and International Affairs, where he is a certificate candidate, on socioeconomic integration in school districts with a history of court-supervised desegregation.

"Dan-el can cut through a great deal of information and focus quickly on the important points," said Nathan Scovronick, a lecturer in the Wilson School and Padilla's thesis adviser there. "He is able to weigh both the practical and the moral implications of a policy issue. He always keeps in mind that policy-making is not an abstract exercise, that it affects the lives of real people."

Padilla's work in the Wilson School is an extension of his commitment to educational issues. He has served as a counselor and program leader for Prep for Prep and continues to interview prospective students for the program. As he plans his own career as a classics scholar at the university level, Padilla intends to advocate for reforms that will help provide better access to education in America and to encourage more minority students to pursue studies in the humanities.

After graduation, Padilla will head to Oxford University to read for a second bachelor's degree in classics, supported by the Daniel M. Sachs Class of 1960 Graduating Scholarship, one of the highest honors given to Princeton undergraduates. It is among many awards he has earned at Princeton, including the Freshman First Honor Prize, the Shapiro Prize for Academic Excellence and the Van de Velde Prize for Junior Independent Work in the Wilson School.

Both Feeney and Flower said they expect Padilla to become a major figure in the classics field in a short time. According to Feeney, "He has everything it takes to succeed -- sheer talent, capacity for self-motivated hard work and a passion for the subject."