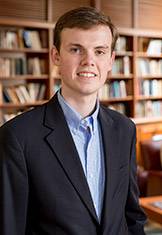 Neil Hannan found a home in the Department of Classics when he arrived at Princeton University four years ago. At Commencement on Tuesday, June 2, he will deliver a speech in Latin as salutatorian of the Class of 2015.

Beginning with a Latin course he took on a whim as a freshman, Hannan, who is from Manhasset, New York, embraced the classics department and the opportunities it offered. He traveled to Rome to learn about Ovid's poetry in the context of the city and to Romania to participate in the excavation of a Roman temple to the god Mithras. He worked closely with faculty members in class and on a range of independent projects.

"I really like classics as a department, both because of its approachable faculty and because of the material, which lets you interact with big themes that recur across history in an interesting way," said Hannan, who traced his interest in classics to his study of Latin at Regis High School in New York City.

His senior thesis, advised by Denis Feeney, the Giger Professor of Latin and chair of the Council of the Humanities, examines weak authority figures in literature from the early Roman Empire, exploring the power relationships of intermediate figures during the increased centralization of administration in the rule of Augustus and his successors.

While classics is Hannan's academic home, he has appreciated the opportunity to explore all the University has to offer.

"I've done a variety of things here, which is something I've really liked about the liberal arts atmosphere at Princeton," Hannan said. "I am grateful to my professors and peers, who have made me feel welcome in courses on topics ranging from quantum chemistry to Dostoevsky's novels. Classics has given me the opportunity to really get in depth on a topic in a way I've really liked. But at least as much as I appreciate the depth I also appreciate the breadth of Princeton — the ability to move into departments and how open professors are to you experimenting in different fields."

One of the other fields he has explored is finance. He is pursing a certificate in finance and after graduation is planning to work as an investment associate at Bridgewater Associates, a macroeconomic hedge fund in Connecticut. His long-term goals are to study the drivers of economic behavior for use in economic policy and academic work.

Hannan's study of classics has helped shape his thinking in that area as well. One of his two junior papers examined attitudes toward money lending in the late Roman Republic and early Roman Empire through the examples of Brutus and Seneca.

That's just one example of how he has discovered the study of classics to be relevant to the present day, Hannan said.

"I've found the analysis you do in reading ancient texts can be a skill that you call on in other courses, such as economics," Hannan said. "On a different level, I think what I've really enjoyed about classics is that it allows you to look at big picture themes — themes I find interesting both abstractly and in our present world — but look at them in a very different cultural mindset and maybe get a different picture of them than you would just looking at the contemporary world."

Feeney, who described Hannan's thesis as one of the best he has seen in his 15 years at Princeton, said the senior is at home in many genres and modes of scholarship.

"Any conversation with Neil reveals a person with a remarkable range of reading and intellectual sympathy," said Feeney, who also taught a graduate seminar on Horace's "Odes" Hannan took this spring. "He has read voraciously for a long time, in poetry ancient and modern, in novels and memoirs of all periods and kinds. He brings this well-stocked mind to his study of the classics, and the result is an impressively mature and deep approach to everything he does."

Among his academic honors, Hannan has shared the George B. Wood Legacy Junior Prize with Allison Kruk, an award given to a member of the senior class in recognition of exceptional academic achievement during junior year. He is a member of Phi Beta Kappa and has twice received the Shapiro Prize for Academic Excellence.

He is a peer academic adviser for freshmen in Forbes College and has served as a tutor in introductory economics and statistics at the McGraw Center for Teaching and Learning. He was a portfolio manager on the Business Today investment team and the community service chair of Princeton Charter Club. He is an undergraduate fellow for the Behrman Society of Undergraduate Fellows and the James Madison Program in American Ideals and Institutions.

Hannan also has worked as a research assistant to Melissa Lane, the Class of 1943 Professor of Politics and an internationally recognized scholar of ancient political theory.

Lane said Hannan — whom she taught in an undergraduate course and a graduate seminar — was "more like an academic colleague than a student assistant" as he compiled the biography and glossary for her recently published book, "The Birth of Politics," and helped her outline and research a paper on Roman philosophy in politics.

"As both an unparalleled scholar and a kind and thoughtful contributor to every forum in which he participates on campus, Neil Hannan is a perfect choice for salutatorian," Lane said.