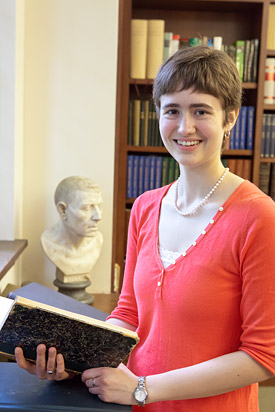 Elizabeth Butterworth, the salutatorian for Princeton's Class of 2012, delved into the study of Latin during her time at the University to be able to read texts from the classics in the original. She will continue the tradition of giving a speech in Latin at Commencement. (Photo by Denise Applewhite)

When Princeton University senior Elizabeth Butterworth was in middle school she immersed herself in the richly imagined world of J.R.R. Tolkien's "Lord of the Rings." The experience sparked her fascination for stories from other eras, along with an abiding passion for delving into texts.

"I fell in love with that book. It made me interested in mythology and epic stories," she said.

At Princeton, Butterworth leapt at new opportunities to immerse herself intellectually. She became an exceptional student in classics and mastered Latin. In her sophomore year, she read her first book fully in Latin — poems by Catullus. Her motivation was to be able to "access the literature in its original text," she said.

Such accomplishments as a classics major have led to Butterworth being named salutatorian for the Class of 2012. She will continue the Princeton tradition of delivering a speech in Latin at Commencement on Tuesday, June 5. Princeton's first Commencement, held in 1748, was conducted entirely in Latin.

"Liz is an extraordinary young woman of character and purpose, whose intellectual gifts are more than matched by maturity and professionalism unusual for her age," said Yelena Baraz, an assistant professor of classics who is Butterworth's senior thesis adviser. "She is a brilliant reader and combines rigor with insight in a way that is quite inspiring."

Butterworth grew up in Auburn, Mass., in a family who "loves reading and literature," she said.

Accepted by several prestigious schools, Butterworth said attending Princeton Preview — a three-day program for accepted students sponsored by the Office of Admission — helped her decide to come to Princeton.

"Princeton seemed to take academics the most seriously," she said, noting that Professor of Classics Joshua Katz sent her a personal email inviting her to meet with him during Princeton Preview and that President Shirley M. Tilghman spoke to the admitted high school seniors in Richardson Auditorium to kick off the event. "The other schools I looked at didn't have that personal touch with the faculty, and I was looking for a very serious academic experience," Butterworth said.

Butterworth's commitment as a student is evident in the academic honors she has received. This fall she was awarded a Rhodes Scholarship, which she will use to pursue a master's degree in comparative and international education at the University of Oxford after graduation from Princeton. A member of Phi Beta Kappa, she twice received the Shapiro Prize for Academic Excellence and also earned the classics department's Charles A. Steele Prize for high proficiency in Greek and Latin.

"Coming to Princeton has impressed upon me the importance of being able to interact with a broad, international community of scholars and read texts in other languages. An education with a strong humanities component is very important," Butterworth said.

For her senior thesis, Butterworth chose to write on the Roman poet and satirist Horace, inspired by classes she took with Baraz and Denis Feeney, the Giger Professor of Latin and a professor of classics.

"Horace's satires are a delight to work with because there are so many layers of meaning," she said. "He strikes a voice that is oftentimes colloquial and crude, but behind it all is deep knowledge of and engagement with a wide range of literary and philosophical traditions."

Butterworth has high praise for her thesis adviser. "Professor Baraz is a wonderful, extremely accessible and encouraging professor," she said. "I was really engaged and interested in the way that she encourages [students in her] seminars to have productive and interesting discussions about texts. That was a very transformative experience."

Observing Butterworth in his class on Horace, Feeney said he was struck by "her remarkable Latinity, her very high critical skills and her uncanny grasp of what the key issues in studying Horace were. This kind of intuition is incredibly rare in an undergraduate."

Going beyond the classroom

Butterworth said it was also "transformative" to pursue activities beyond the classroom. To further dig into the ancient world, she spent the summer of 2010, on Baraz's suggestion, working on an excavation in Gabii, Italy, run by the University of Michigan. The following summer she was among a group of Princeton students who joined Nathan Arrington, an assistant professor of art and archaeology at Princeton, on an excavation in Nemea, Greece, where he is field director.

Arrington was "phenomenal to work with," Butterworth said. "He is a fantastic teacher as well as a fantastic archaeologist, and he is so interested in making sure that we were learning from our experience."

Arrington commended Butterworth's engaged approach to the work. "Liz is an outstanding archaeologist," he said. "Perhaps more important for the excavation than her sharp intellect was her ever-present cheerful and patient disposition. She masterfully managed one of the excavation trenches, leading by example."

Butterworth's hands-on approach to various endeavors also is expressed in her commitment to public service.

Taking a year's leave of absence in 2009, she returned to Massachusetts and volunteered at a weekly general enrichment after-school program at All Saints Episcopal Church in Worcester. There Butterworth, who had studied piano since age 6 and taught piano lessons in high school, founded a program called Afternoon Tunes, which offers free private and group music instruction. She still manages the program from campus.

During her four years at Princeton, Butterworth has tutored schoolchildren in reading in Trenton, N.J., through the Student Volunteers Council's GetSET and imPACT programs, where she experienced firsthand the power of literature to turn around students' apathy toward learning.

Last winter, after being awarded the Rhodes Scholarship, she established a peer-mentoring program for Princeton students interested in pursuing academic fellowships in the United Kingdom by giving them the chance to meet recent recipients in an informal setting. She is currently a peer academic tutor for Latin and a Whitman College peer adviser. She also has served as a stage manager for theater productions on campus.

Butterworth plans to pursue a career shaping educational policy, with a particular goal of increasing arts education and classical education at the primary- and secondary-school levels, and working hands-on with school systems.

"There is no cause more important to the country's future than public education, and it is very heartening to see someone of Liz's intellectual gifts and personal character committing herself to the mission of improving educational opportunities for underprivileged students," Feeney said.