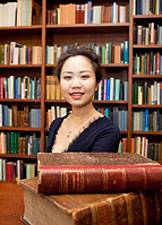 Senior Veronica Shi, a scholar of Greek and Latin, has been awarded the 2011 Daniel M. Sachs Class of 1960 Graduating Scholarship, one of the highest awards given to Princeton undergraduates.

Shi, a native of West Covina, Calif., is a classics major. She plans to use the Sachs award to pursue postgraduate studies in Greek and Latin language and literature at Worcester College at the University of Oxford.

Shi arrived at Princeton with no knowledge of Greek or Latin, but hearing Homer read aloud by Professor Denis Feeney in the class "Humanistic Studies: Approaches to Western Culture From Antiquity to the Modern Period" in the fall of her freshman year ignited a love of the classics.

"That moment hooked me," she said. "I realized Homer was still a living force, and that there was so much to discover."

The next semester, she took intensive courses in both Greek and Latin, nicknamed "Turbo-Greek" and "Turbo-Latin," both of which squeeze a year's worth of language instruction into 12 weeks. "No one has ever combined these two killer courses in the same semester," said Robert Kaster, the Kennedy Foundation Professor of Latin, who taught the "Turbo-Latin" course. "Her work was literally almost flawless. She continues to find ways to surprise and occasionally astound me in each context in which I find her."

Shi has focused her studies on Greek and Latin literature, especially Latin poetry of the Republican and Augustan eras. Studying at Oxford "will prepare me for a career of teaching, persuasive research and advocacy on behalf of classics in American higher education," said Shi, who plans to teach at the university level and contribute to higher education policymaking. She hopes to work on broadening access to classics for disadvantaged students.

"I hope to be a public voice for the importance of humanities and liberal arts education," Shi said. "I want to convey how important both are to the development of one's mind and moral capacity."

"Ronnie is the kind of student a teacher meets very rarely indeed," said Feeney, who is the Giger Professor of Latin and a professor of classics. "She has a practically Mozartian gift for language and for criticism, showing an uncanny ability to intuit how a fully trained classicist does things; at the same time, she brings a fresh and original approach to everything she does, taking nothing for granted and opening up new perspectives on old problems."

Shi's senior thesis focuses on the development of epic poetry from Homer to Virgil, with an emphasis on the genre's transformation from a repository of myth into a tool of political and cultural persuasion in Hellenistic Greece and Rome. "This topic demands a range of knowledge and skill which very few undergraduates could master, including a bibliography in a range of modern languages other than English," said Feeney, who is her thesis adviser. "It will be one of those rare senior theses that really change the way we think about the issues."

A graduate of Arcadia High School, Shi has been active in several extracurricular activities at Princeton. She has served as a debate coach for high school students, and is an accomplished pianist who has produced, written and performed in campus stagings of classical drama and classically inspired opera. During her sophomore year, she organized a performance of Euripides' "Hippolytus" in the original classical Greek. She currently is working on a libretto in Latin for a student opera production.

Shi twice has won the Shapiro Prize for Academic Excellence and received a Mellon Mays Undergraduate Fellowship, which recognizes minority students and others with a demonstrated commitment to eradicating racial disparities who will pursue a Ph.D. in the arts and sciences. In addition, she won the Class of 1939 Princeton Scholar Award, given to the undergraduate who, at the end of the junior year, has achieved the highest academic standing for all preceding college work at the University.

Shi has been a peer academic adviser at Butler and Mathey colleges, and she is one of two students serving on the search committee for the dean of the college.