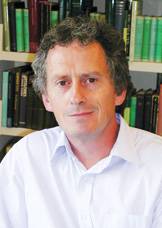 Denis Feeney, the Giger Professor of Latin and professor of classics, has been appointed chair of the Council of the Humanities. Feeney is also director of the Program in Humanistic Studies and the Stewart Seminars in Religion.

"The Council of the Humanities has been a real force for good at Princeton, and it will be fun to see how we may continue to foster excellence and innovation in teaching and research, especially within the framework of President Christopher L. Eisgruber's strategic planning process," said Feeney. "I am looking forward to working with the new University administration and with my friends in the humanities."

Feeney, whose scholarship focuses on Latin literature and Roman culture, assumed his council duties as of July 1. He joined the Princeton faculty in 2000. He has taught a range of Latin courses in the department, from beginner's Latin to upper-level reading courses. He is a regular participant in the Humanistic Studies sequence HUM 216-217, "Interdisciplinary Approaches to Western Culture" from classical antiquity to the middle ages. His graduate courses have included "Beginnings of Latin Literature" "Virgil's 'Aeneid,'" "Horace's 'Odes,'" and "Ovid's 'Fasti.'"

As chair of the council, Feeney will promote teaching and research in the humanities, overseeing a wide array of interdisciplinary programs that bring together faculty, students and distinguished visitors from many fields. In addition to leading the 37-member council of department chairs and program directors, he will focus on important policy issues and long-range planning in the humanities, including several initiatives:

• Research and teaching. Expanding on the council's existing programs, Feeney said he plans "to foster innovative research and teaching across the campus, and bring academic and non-academic visitors to campus to enrich our life here."
• Humanistic studies. He will continue to develop the new undergraduate certificate in humanistic studies, "to ensure that undergraduates can have access to interdisciplinary work in the humanities at the highest level."
• Graduate scholarship. Feeney notes the training and mentoring of graduate students in the humanities will be "a very important issue in the coming years, given the likely shape of the career structure for Ph.D. graduates."
• Scholarship in the digital age. "As the University continues to adapt to the impact of the digital revolution, in ways that are very hard to predict, we will be playing our part in responding to those challenges, especially through the new Digital Humanities Initiative," he said.

The council, which marked its 60th anniversary in 2013, is a crossroads for artists and scholars, where students, faculty members and visiting fellows engage in research and intellectual exchange in a broad array of interdisciplinary subjects.

He is the author of three books: "The Gods in Epic" (Oxford, 1991); "Literature and Religion at Rome" (Cambridge, 1998); and "Caesar's Calendar" (California, 2007). He has just completed his fourth book, "Roman Horizons," about "why Rome developed a literature in Latin when it shouldn't really have done so."

Feeney's scholarship and deep commitment to the humanities extends throughout the University community. In July, he led "Ancient Empires: Tunis to Rome," a Princeton Journeys excursion for alumni. The itinerary explored the intersection of Greek, Phoenician and Roman civilization in commerce, culture and conquest on two continents, Europe and Africa — from the ruins of Carthage in Tunis to the National Museum of Archaeology in Malta.