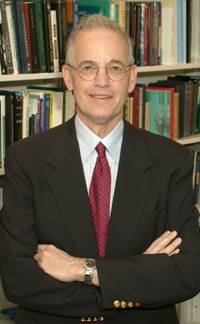 Harold T. Shapiro, who served as Princeton’s 18th president from 1988 to 2001, has written a new book based on a series of lectures he delivered at the University of California on the role of higher education in society. 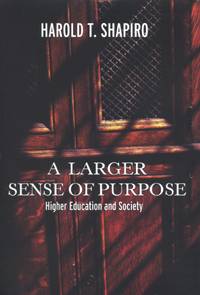 Five years since he stepped down from the University’s presidency, Harold T. Shapiro remains committed to examining the responsibilities that Princeton and other institutions have in supporting and improving American society.

In 2003, Shapiro delivered the University of California’s inaugural series of Clark Kerr Lectures—honoring its renowned former president — on the role of higher education in society. Those lectures serve as the basis for his new book, “A Larger Sense of Purpose: Higher Education and Society,” published in 2005 by Princeton University Press. Shapiro traces the history of the modern research university and includes essays on issues such as ethics, the differences between private and public higher education, and the relationship between universities and corporations.

Shapiro served as Princeton’s 18th president from 1988 to 2001, following an eight-year tenure as president of the University of Michigan. A professor of economics and public affairs, he currently is pursuing numerous teaching and research endeavors on topics ranging from stem cells to the history of rare book collection. He also is involved in many public service activities, including serving as chair of New Jersey’s state ethics advisory panel on stem cell research and as a member of the U.S. Olympic Committee’s board of directors.

Shapiro recently discussed the issues addressed in his new book.

How do you describe the key elements of the relationship between the American university and society?

For a long time, I’ve had this notion of a university both providing society with what it needs in terms of education, research, scholarship and technology, but also serving as society’s critic.

As society’s critic, we are responsible for evaluating current arrangements—whether in the art world, humanities or science, for example — and asking ourselves if there is a better set of arrangements. We serve society in that sense by pushing it and always being slightly uncomfortable with the status quo. One of the things I told President Tilghman when I left office was, “Everything we do could be done better. There’s nothing we’re doing here at Princeton that shouldn’t be re-examined to try and find a better way to accomplish it or to take a different direction.”

I think this dual function is what makes the modern university so different from its colonial counterpart or its 18th- and 19th-century counterpart. If you think about it, for the government or others to support an institution whose responsibilities include criticizing the status quo, that’s an unusual arrangement. That’s a tribute to the hope of liberalism—that you always have to try to find a better way.

How did the university develop this dual role as society’s servant and critic?

My view is that the revolution which established the modern university is one of the latest in the liberal revolution. Eventually people began to think that if we’re trying to probe the frontiers of an area for a better way to do things — whether it’s a political frontier or a scientific frontier—we have to get some people to do this. In this country the universities took the leadership and demonstrated that they could provide this kind of a function.

One factor in the transition was that scholars who had been trained abroad came back and tried to reproduce here what they saw in Europe in the latter half of the 19th century. But the 19th century also was a century of extraordinary transition in American life, when we became the most productive nation in the world. You could say that in the 19th century we imported everything we needed — ideas, technologies, people. In the 20th century we had to do this for ourselves to create forward progress. We had to turn somewhere to generate the training, ideas and new technologies, and society focused that effort on the university.

In your book, you note that the university is now on the brink of another major transformation. What is your vision of that transformation?

The availability of so much information through the telecommunications revolution has to have an impact on an institution where production of knowledge and diffusion of knowledge is its central purpose. Things are going to be diffused and learned in a different way. For example, I recently spoke to a high school class in physics, and all of their homework was done online from a university in Texas. I think there will be a less significant jump as you go from your high school years to your undergraduate and graduate years — the borderlines between these are going to start merging or intersecting in new ways.

There is also the question of what people can learn on their own, without the kind of classroom presence with which we are so familiar. I very much believe in person-to-person contact unmediated by cyberspace. But these are open issues.

In emphasizing your view that the future of the university depends on the values and objectives of its leadership, what do you think those values ought to be?

We have to think through more carefully than we have in the past what set of interests are most important for us to serve. Is it the interest of the scholarly world? Training? The underserved in our country? Those who are not even in our country?

We can’t pretend that 50 years from now we will walk on campus and it will look and feel the same. I’ve always thought that, for the most distinguished universities, the greatest danger we face is self-satisfaction. Princeton has had periods when it was more distinguished than other periods. Fortunately, we’re in a period when things are going quite well and Princeton is demonstrating the kind of leadership that is necessary to adapt. But we’re going to have to continue to ask ourselves these questions: Are we in a leadership position? Is anybody following us?

One example is our financial aid policy. [During Shapiro’s presidency, Princeton enacted a series of financial aid reforms to make the University more affordable for low- and middle-income students, including replacing loans with grants.] We weren’t doing so well in that area. There were people out there who we should have been serving who were not at Princeton, and we devoted some of our resources to meeting their interests. It’s not always something that’s very flamboyant, or a cyber-based initiative of some kind.

Will commercial pressures become an increasingly important area where those values are tested? One topic you discuss in the book is the fact that faculty research is becoming more valuable to entities outside the university.

This is an important issue. The corporation has its own legitimate interest which it is obligated to pursue on behalf of its shareholders. The university has interests it is obligated to pursue. In certain cases, the overlap can be good for both. However, one has to be careful not to pursue those projects which in one way or another undermine one of your most important principles, such as openness. The corporation has lots of reasons to pursue research which is confidential and proprietary—that does not serve our interest. And even though there might be a lot of money at stake, we have to think very, very carefully about whether you would become a servant of the corporation or whether you continue to serve the university’s broader interests.

Some scientific issues are a lot closer to new products than others. That’s exactly where the corporation, of course, likes to be. But the most interesting scientific questions may involve much more basic, fundamental research, where it is not at all obvious if it will generate a new product. The university has that responsibility to be exploring the frontiers of knowledge at the most fundamental level.