Tracing jazz’s evolution from the club to the classroom 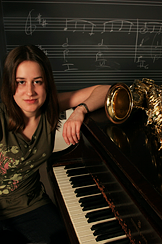 A saxophonist since age 12 and a budding music historian, Megan Summers explored how jazz has been affected by formal education programs for her senior thesis.

Summers, a history major and certificate candidate in African-American studies, investigated how the genre has been affected by the rise of formal jazz education programs beginning in the late 1960s. With its mainstream popularity waning, the jazz community focused on sustaining itself through educational programs emphasizing the music’s history and artistry rather than continued innovations and social commentary, according to Summers.

“While widespread school programs gave the music a greater level of accessibility to students desiring to master it, jazz education made the genre less accessible to American mainstream culture, less representative of any sort of common experience,” Summers writes. “The music lost its shared role of parallel motion with 20th-century social progress in the midst of an environment of heightened intellectualism. What was once a historically folk genre of music, providing a creative outlet for previously voiceless members of society, transformed into a classical, canonized version of its former self.”

The project was inspired by Summers’ experience as a student of jazz performance and “trying to figure out how that fits in with the whole concept of an improvisational music,” she said in an interview. A saxophonist since age 12, the Fort Wayne, Ind., native attended high school at the Interlochen Arts Academy in Michigan, where she studied jazz and played in the school’s ensemble. She has continued to play on her own while at Princeton and hosts a jazz program on the student-run WPRB radio station.

Summers’ research also was driven by the fact that “people like Miles Davis said that jazz is dead. I’m trying to look at some of the reasons why that might have happened and how the jazz community responded to this reality they were facing,” she said.

The first half of Summers’ thesis traces the development of jazz’s three main subgenres and cites contributions from key artists: from Duke Ellington ushering in the “swing” era in the 1920s; to Dizzy Gillespie and Charlie Parker popularizing the “bebop” sound in the 1940s; to edgier “hard bop” artists such as Art Blakey, Charles Mingus and John Coltrane using jazz to express their viewpoints about the civil rights movement and other social issues in the 1950s and 1960s.

She then examines the effect of formal education programs that arose as jazz’s mainstream appeal was diminishing, focusing on Indiana University’s Department of Jazz Studies, which was founded in 1968 by renowned musician and scholar David Baker. Though Summers was unable to interview Baker, she analyzed his published views on jazz pedagogy and investigated the influence of Indiana’s curriculum on the development of programs at numerous institutions.

“It is Baker’s pedagogical contributions that now play the most influential role in portraying jazz as an art music, intellectually grounded and currently preservationist in nature,” Summers writes. Baker’s influence also ushered in an era of “watered down” jazz, in her view.

“With members of the jazz community deciding to create a structured curriculum, they had to pick and choose what was going to get sacrificed in terms of what was passed onto the next generation,” Summers said. “So you get this whole notion that one subgenre, bebop, was the essential component of jazz, and everything else goes by the wayside.”

“It’s difficult for the music to progress or to apply to American culture the way it once did when it’s operating under this preservationist mentality where it’s just trying to sustain the jazz of the past and pass on this legacy, as opposed to continuing with the tradition of innovation,” she said.

Summers also interviewed some 25 graduates of the Indiana jazz program, ranging from some of its earliest students to more recent alumni.

“It was very interesting to see different reactions to their experiences in the program,” she said. “Some of the students from the early 1970s aren’t musicians any more — they’re mostly teachers now. They didn’t really know what to expect because it was such a new phenomenon. The people who enter a jazz program now know they’re going to be taught by professional educators as opposed to professional performers, and they’re going in with the intention of becoming jazz educators, too.”

Summers’ adviser Alec Dun, a lecturer in history, said that she successfully handled the challenge of “how to be historical regarding something about which she had very personal convictions. We’ve had lots of wonderful discussions about her topic blossoming and extending into arts, culture and education.”

“At its riskiest, it could come across as a polemic against the way jazz as taught in schools has evolved and the problems therein,” Dun said. “I tried to help her take herself out of it and let her research do the talking — not to have her perspective disappear, but to speak through examples.”

Summers said her thesis project has been a valuable opportunity to study jazz’s social and cultural impact. After graduation, she hopes to continue on that path by pursuing a master’s degree in jazz history from the Institute of Jazz Studies at Rutgers University.

“Ultimately,” she said, “I want to be able to continue telling the history of this music from various perspectives.”