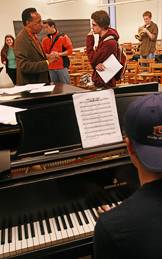 Anthony D.J. Branker (left), senior lecturer in the Department of Music and director of Princeton's jazz program, talks with students in his course on jazz theory. The 1980 Princeton graduate has helped transform the University's jazz program by broadening course offerings, bringing in notable musicians to teach and perform with students, and entertaining audiences at Princeton and beyond with the University Jazz Ensembles. Photo: Denise Applewhite 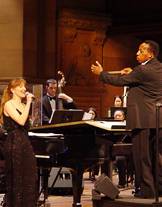 Branker conducts the Concert Jazz Ensemble and the University Orchestra in a February 2004 performance in Richardson Auditorium featuring Martha Elliott, a 1982 Princeton graduate and a voice instructor in the music department. The University Jazz Ensembles have won two national awards for performance from Down Beat magazine, a leading jazz publication.   Photo: John Jameson

Below left: After a session of his course on jazz theory, Branker talks with sophomore Jonathan Scholl, a saxophonist who plays in the Concert Jazz Ensemble. In addition to increasing the music department’s course offerings in jazz, Branker has expanded the University Jazz Ensembles to allow students to perform a variety of styles since taking over as director of Princeton’s jazz program in 1989.

Anthony D.J. Branker, director of Princeton’s jazz program, spent the fall 2005 semester helping the Estonian Academy of Music and Theatre develop its jazz studies curriculum. For Branker, a 1980 Princeton graduate, the challenge hearkened back to his own return to campus in 1989.

As a music student at Princeton, Branker envisioned one day coming back to help transform the University’s small jazz program. He has fulfilled that goal by broadening course offerings, bringing in notable musicians to teach and perform with students, and entertaining audiences at Princeton and beyond with the award-winning University Jazz Ensembles.

“Before Tony the jazz program really lived from year to year, from hand to mouth,” said Paul Lansky, a longtime Princeton music professor who taught Branker. “If there weren’t students who cared about it, it wouldn’t have existed at all. Tony built the program into what it is today and deserves all the credit.”

Branker, a senior lecturer in the Department of Music, is an acclaimed composer and trumpeter known for his energy and dedication to Princeton’s jazz program. In addition to teaching courses in jazz history, theory and composition, he conducts the University’s Jazz Ensembles, which typically consist of two big bands and several smaller ensembles focused on different composers and styles each year. The ensembles have twice received national awards for performance from Down Beat magazine, a leading jazz publication.

“What’s neat is seeing that students recognize there is a really vibrant jazz culture here at the University, and many are applying to Princeton specifically to be part of that program,” Branker said.

Besides handling his teaching, conducting and administrative duties, Branker makes time for his own music. He has written some 110 works, which have been performed in Europe and the United States. The International Association for Jazz Education has awarded him two composition prizes.

Earlier this year, his ensemble, Anthony Branker and Ascent, released a CD of eight of his original compositions, “Spirit Songs,” which bring together Brazilian, Cuban, African and Jamaican influences. A review in the May issue of All About Jazz: New York noted, “Primarily working outside of the major league jazz spotlight, but not far from it, Anthony Branker is crafting some of today’s finest compositions.”

During his student days at Princeton, Branker “had a look in his eye that said that he was going to get where he wanted to go,” Lansky recalled. As it turned out, that was back at the University.

“When I was an undergrad I used to talk to other music majors and say how much I would love to come back here at some point and try to develop the jazz program,” Branker said. “I remember we had such talented kids who just loved to play; Stanley Jordan [class of 1981] was a contemporary of mine. There really was no reason why we couldn’t develop a program on the same level of schools of music or jazz studies programs at other institutions.”

After graduating from Princeton, Branker earned a master’s degree in jazz pedagogy from the University of Miami. While writing and performing his own music and playing with many top artists, Branker taught at several institutions, including the Manhattan School of Music, Hunter College, Ursinus College and the New Jersey Summer Arts Institute at Rutgers University. When the position of director of Princeton’s jazz program came open in 1989, he jumped at the opportunity.

“Princeton had some really wonderful jazz conductors over the years. A number of faculty from the Manhattan School of Music served in the 1980s as director of the jazz ensembles, including Justin DiCioccio, who is now chair of the jazz department at the Manhattan School of Music,” Branker said. “There always had been a great environment for the music and an interest from the students, but a real need to expand.”

Under Branker’s guidance, Princeton has added three courses to the introductory course in jazz history that existed when he was a student — two courses in jazz theory and composition and a jazz performance seminar that is traditionally taught by a visiting artist. He has won several teaching awards from jazz education organizations and from the U.S. Department of Education. Branker also has brought in many well-known musicians and jazz educators to teach and perform with students, including current visiting instructors Ralph Bowen, Michael Cochrane and Ralph Peterson Jr. and previous guests such as Jordan, Clark Terry, Terence Blanchard, Slide Hampton, Roy Hargrove and Craig Handy. 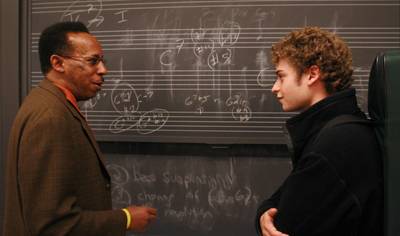 Branker has created opportunities for students to perform a wide spectrum of music by establishing smaller rotating ensembles to augment the traditional 17-piece big bands. These smaller ensembles have focused on the music of Wayne Shorter, Thelonious Monk, Charles Mingus and other famed composers, as well as on varied styles such as Afro-Latin, avant-garde, New Orleans, hard bop and fusion. He also conducts the Jazz Vespers ensemble, which performs regularly in the University Chapel.

Princeton’s student ensembles have produced nine recordings during Branker’s tenure and have performed around the country. A recent highlight, Branker noted, was a concert at McCarter Theater in April, when the Concert Jazz Ensemble joined the Juilliard Jazz Orchestra in a performance of Duke Ellington and Billy Strayhorn’s classic “Far East Suite.”

“We now spend less time working on technical aspects of the music and more time making the music just feel good — something that is not easy to facilitate as a director, but Tony offers articulate guidance based on years of experience and a deep understanding of the music,” Wasserman said.

“It has been especially rewarding to work with him on his original compositions,” Wasserman added. “He always communicates a clear idea of how he wants a given tune to sound, and then we as musicians put our stamp on it. As a result, Tony’s compositional style has had a big influence on my development as a musician. The emphasis of the Jazz Composers Collective has been to place each of us in the role of composer/director with our own original tunes, but Tony is still there to help us make the music feel good.”

In 2005, Branker spent five months at the Estonian Academy of Music and Theatre as a Fulbright Scholar, helping to shape the conservatory’s jazz studies curriculum, which was then in its second year. He taught jazz composition and history courses while conducting three student ensembles. One of the ensembles performed an original work by Branker’s 12-year-old daughter, Parris, a budding pianist and composer, as a surprise when she visited.

While in Estonia, Branker wrote 32 new songs, inspired by the culture and people of the small Eastern European country and by themes of spirituality. A number of these compositions have been performed by Princeton student ensembles, and he hopes to have his Ascent ensemble record a CD of some of these works in the spring.

At Princeton, most of the students Branker teaches and conducts are not music majors — of the 35 students in the jazz ensembles this year, he estimated four or five are majoring in music. At the Estonian Academy, many of the students he taught already were established professional musicians and teachers, but were seeking their first opportunity to obtain a degree in jazz studies. While the academy provided a much different environment, Branker said his time there was particularly valuable for his work at Princeton.

“One of the great things about the experience is I had a lot of time to reflect on how I teach,” he said. “Language should not have been an issue, but it was at times. They do speak English, but communicating in the same kind of ways and presenting material in the same ways I would do here was a bit difficult, so I had to fine-tune that process a bit, which got me thinking about how to get to the crux of the matter in dealing with issues of performance or composition. I had a chance to really look at what it is I do and see what, if anything, needed to be revamped.”

Branker returned to Estonia during fall break in November, bringing the five-member Jazz Composers Collective for a brief concert tour. The Princeton students performed their own original material in concerts at two jazz clubs. The group appeared on Estonian national television’s version of “The Today Show,” performing one of Branker’s compositions, “Crystal Angel.” They also performed at the academy, premiering “The Eesti Jazz Suite,” Branker’s five-movement work inspired by his time in Estonia.

Wasserman said the trip “was a great opportunity to share our original music with people from a different culture, and I really enjoyed seeing a part of the world that I might not otherwise have had the occasion to visit. Performing abroad provided a sense of purpose and energy that doesn’t necessarily accompany our performances here. … The trip brought us closer together, both musically and personally.”

Following his work in Estonia, Branker is now involved with an outreach project closer to home. The Princeton jazz program has partnered with the Princeton Public Library to obtain a grant from the National Endowment for the Humanities’ program, “Looking At: Jazz, America’s Art Form.” The grant will support a series of films and discussions on the cultural and social history of jazz, as well as concerts by three Princeton jazz ensembles, to be held this spring for the campus and local communities.

Whether on campus or 4,000 miles away, Branker has demonstrated a strong commitment to raising awareness of and interest in the music he loves. Students and colleagues said that his passion for jazz and his enthusiasm for teaching and performing are infectious.

“He so obviously loves what he is doing, that his students and his audiences just beam at his concerts,” said Scott Burnham, chair of the music department. “Everyone goes home happy.”

Tracing jazz’s evolution from the club to the classroom