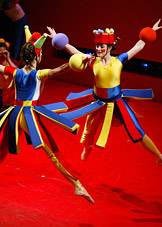 A dance set to Claude Debussy's "The Toy Box" is one of three pieces that will debut during "An Evening of Enchantment" Thursday through Saturday, April 8-10, in the Berlind Theatre at the McCarter Theatre Center. The piece will include an entirely new "jazz overture" found by Professor of Music Simon Morrison and new choreography by Senior Lecturer in Dance Rebecca Lazier. More than 60 students from the University's Department of Music and Lewis Center for the Arts are involved in the production, which also will include John Alden Carpenter's "Krazy Kat: A Jazz Pantomime" and Paul Lansky's "Table's Clear." (Photo: Frank Wojciechowski)

"An Evening of Enchantment," featuring world premieres of three dance pieces made possible by the collaboration of students and faculty members from Princeton University's Department of Music and Lewis Center for the Arts, will be presented Thursday through Saturday, April 8-10, in the Berlind Theatre at the McCarter Theatre Center.

Simon Morrison, professor of music and project coordinator, explained that the musical portion of the production is experimental in nature because it marks a shift in the usual emphasis where jazz and classical music are concerned. "Twentieth-century composers like Debussy and Carpenter were fascinated by American jazz and incorporated it in watered-down guise into their compositions," he said. "Our project reverses this appropriation by assigning the works of Debussy and Carpenter to jazz musicians. So rather than having orchestral musicians absorbing jazz, we are having jazz musicians absorbing orchestral music." 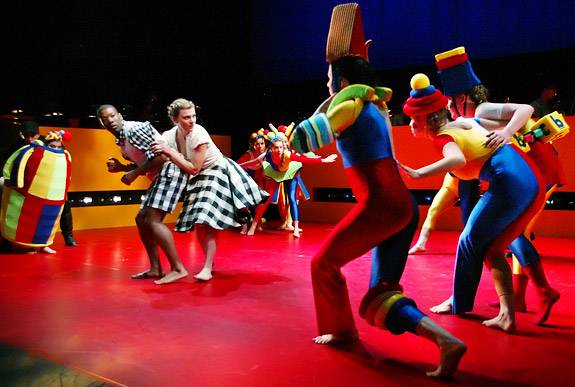 According to Rebecca Lazier, the aim of "The Toy Box" is to return to the essence and inspiration of Debussy's music, which finds the composer at play with his favorite musical ideas. (Photo: Frank Wojciechowski)

"The Toy Box" was left partially un-orchestrated at the time of Debussy's death in 1918, but Morrison has discovered a previously unknown version of the score that includes an entirely new "jazz overture" originally performed in 1918 by the Moscow Chamber Theater. "At the heart of 'The Toy Box' lies something of the sentiments [French poet Charles] Baudelaire expressed in his essay 'A Philosophy of Toys.' Baudelaire believed that toys are children's first exposure to art, to the powers of enchantment," Morrison said. "And Debussy takes us back to that realm of wonder."

Rather than recreating a version of "The Toy Box" that has been produced by various ballet and puppet companies since 1919, director/choreographer Lazier has worked with the designers and dancers to create an original work. The aim of this production, she said, is to return to the essence and inspiration of Debussy's music, which finds the composer at play with his favorite musical ideas. 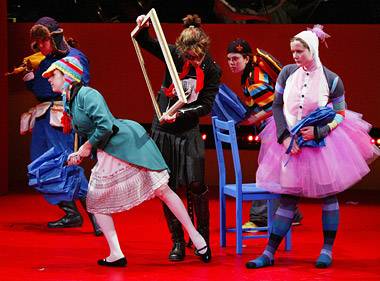 "Krazy Kat" is based on the popular comic strip by George Herriman. The source materials, including the unrecorded original version of the score, have been assembled from archives around the country. (Photo: Frank Wojciechowski)

"For this production we worked collaboratively to create an imaginary and timeless space that furthers Debussy's play with musical ideas through choreographic and physical play and builds an abstract narrative about being transformed by our sense of discovery and curiosity," said Lazier, a senior lecturer in dance.

The students have been involved in the creative process by developing original phrase material based on their characters. Junior Sarah Fingerhood described the choreographic process and performing the work as exciting and amazing, reflecting that "everything that we see in the world is actually imagined and constructed in our minds as reality. Children see things in a very different way; their imagination isn't limited by what they learn. In 'The Toy Box' we can take ideas and just go; it is awesome."

Carpenter's "Krazy Kat: A Jazz Pantomime" was the first orchestral work to use "jazz" in its title. This brief and breezy work is based on the popular comic strip by George Herriman, who provided the plot, and features the strip's most beloved characters. The source materials, including the unrecorded original version of the score, have been assembled from archives around the country. Director/Choreographer Tracy Bersley, a lecturer in theater, has re-imagined "Krazy Kat" in present-day Manhattan with her students. 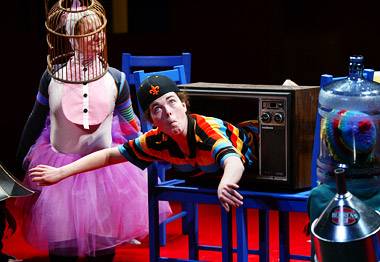 "Krazy Kat's" cast of characters includes the title feline, who is in love with Ignatz Mouse, and Offisa Pupp, a protective police dog. Like "The Toy Box," "Krazy Kat" was aimed at least as much at children as their parents. (Photo: Frank Wojciechowski)

Krazy Kat is insanely devoted to Ignatz Mouse. The mouse does not share the amorous sentiments, preferring instead to bonk Krazy Kat on the head with a brick, which the demented feline interrupts as a sign of affection. The secondary characters include Offisa Pupp, eager to place the menacing mouse behind bars, and Joe Stork. Like "The Toy Box," "Krazy Kat" was aimed at least as much at children as their parents.

Project dramaturg Michael Cadden, director of the Program in Theater, said, "Given the newly discovered 'jazz overture' of 'The Toy Box' and the jazz roots of 'Krazy Kat,' we are particularly blessed to have Anthony D.J. Branker taking the musical lead. As the conductor of the University jazz ensembles, he has made Princeton a hot spot for jazz studies and performance."

"An Evening of Enchantment" will open with the kitchen fantasy "Table's Clear" by Paul Lansky, Princeton's William Shubael Conant Professor of Music. Directed and choreographed by Fehlandt, a lecturer in dance, it will be performed by three recent Princeton alumni.

Paul Lansky, Princeton's William Shubael Conant Professor of Music, was inspired to compose "Table's Clear" after listening to his young sons clean up after dinner one night. They pulled pots and pans from cupboards and shelves and smacked them with makeshift mallets and drumsticks from the silverware drawer. (Photo: Denise Applewhite)

According to Lansky, the project began one evening when, while cleaning up after dinner, his two young sons began pulling pots and pans from cupboards and shelves and smacking them with makeshift mallets and drumsticks from the silverware drawer. He recorded this mischief, along with snippets of the boys' voices, and then spent the next few months editing and manipulating the recorded sounds and turning them into a work of music. 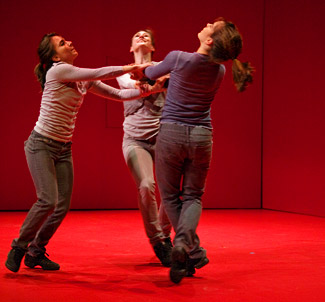 Tina Fehlandt, a lecturer in dance, has choreographed a dance to go with the recorded mischief in "Table's Clear." It will be performed by three recent Princeton alumni. (Photo: Denise Applewhite)

Source materials for "An Evening of Enchantment" were provided by the Dansmuseet, Stockholm; the Library of Congress, Washington D.C.; the Newberry Library, Boston; and the Russian State Archive of Literature and Art, Moscow. Funding for the project comes from numerous departments and programs at Princeton, including the Office of the President; Office of the Dean of the Faculty; Department of Music; Lewis Center for the Arts; Program in African American Studies; Program in American Studies; Department of Comparative Literature; Department of Slavic Languages and Literatures; Program in Russian and Eurasian Studies; the University Library; the Edwart T. Cone Fund in the Humanities Council; and Tiger Baron Foundation Inc.