Student choreography will be showcased along with the work of faculty members and professional choreographers in the annual Spring Dance Festival Friday through Sunday, Feb. 19-21, at the Berlind Theatre. Here, senior Katerina Wong performs in Mark Morris' signature "Grand Duo." Showtimes are 8 p.m. Friday, 2 and 8 p.m. Saturday, and 1 p.m. Sunday. The event is sponsored by the Program in Dance in the Lewis Center for the Arts. (Photo: Valerie Ford)

More than 50 students from a range of academic departments will perform in Princeton's annual Spring Dance Festival Friday through Sunday, Feb. 19-21, at the Berlind Theatre.

Performances are slated for 8 p.m. Friday, 2 and 8 p.m. Saturday, and 1 p.m. Sunday. The event is sponsored by the Program in Dance in the Lewis Center for the Arts.

"For our students, performing on the beautiful Berlind stage after months of work is one of the most fulfilling and catalytic experiences of the year," said Susan Marshall, director of the Program in Dance. (Photo: Denise Applewhite)

The premieres include a ballet on pointe by American Ballet Theatre star Susan Jaffe, a contemporary dance by New York choreographer Camille Brown and faculty member Rebecca Lazier's comedic dance set to the music of Pink Martini. In addition, six student dances chosen from fall choreography courses will be performed.

"Our program courses and extracurricular offerings provide students with numerous opportunities to work directly with renowned choreographers and professional dancers to advance their understanding of dance performance, technique, choreography, history and theory," said Marshall. "The Spring Dance Festival highlights the accomplishments of the past semester and showcases student choreography alongside the work of proven masters, our esteemed faculty and celebrated professional choreographers. For our students, performing on the beautiful Berlind stage after months of work is one of the most fulfilling and catalytic experiences of the year." 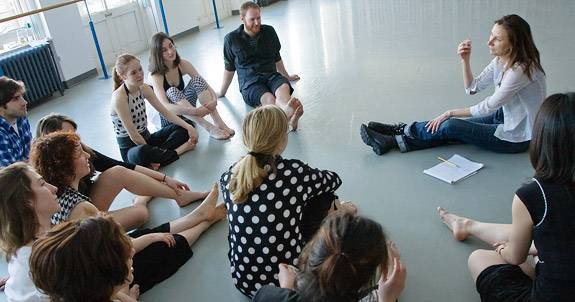 The performance marks the first season at Princeton for Marshall (right), an internationally renowned choreographer, as director of the recently established independent Program in Dance. Marshall has been the artistic director of the critically acclaimed Susan Marshall & Company of New York City for the past 23 years. Here, she discusses a student-choreographed piece, "Scratch Into Silence," with the 13 seniors who have worked on it. (Photo: Denise Applewhite)

Brown will premiere "City of Rain," set to a commissioned score by composer, performer and engineer Jonathan Melville Pratt. She has received numerous commissions from national companies including the Alvin Ailey American Dance Theater, Hubbard Street II and Philadanco.

Jaffe, a guest ballet choreographer at Princeton, will premiere "Pulse." This contemporary ballet on pointe with four movements is set to the atmospheres and rhythms from Donald Knaack's funky album, "Junkman," which features music produced on instruments made from recycled materials. Jaffe's new style infuses ballet technique with contemporary movement.

Lazier, a senior lecturer in the Program in Dance, will present "Night Blooms" to the music of Pink Martini. Inspired by shifting desires, clothes and hearts, the work will be performed by 16 Princeton dancers. Lazier is a Brooklyn-based dancer, choreographer and founder of the dance company Terrain.

Under the direction of Senior Lecturer in Dance Rebecca Lazier, 16 students will premiere her "Night Blooms," shown here in rehearsal. Other premieres will be Camille Brown's "City of Rain" and Susan Jaffe's "Pulse." Twyla Tharp's historic "The Fugue" also will be performed. (Photo: Denise Applewhite)

Morris' "Polka" premiered at the Manhattan Center Grand Ballroom on April 7, 1992, and became the keystone and final movement of his work, "Grand Duo" when it premiered a year later. The original version of "Polka" was for 16 dancers and was later reduced to 14 when incorporated into "Grand Duo." Lecturer in Dance Tina Fehlandt, a principal dancer with Mark Morris Dance Group for 20 years, has staged "Polka" for 12 Princeton students. The Boston Globe has referred to "Polka" as "… a great circle dance rooted in the squats, stomps and slaps of Eastern European folk dance (that) remains one of the most viscerally charged passages in the annals of modern dance."

Tharp's "The Fugue" premiered at the University of Massachusetts-Amherst on April 1, 1970. Its primary phrase of movement is a 20-count theme that its dancers variously execute by way of reversal, inversions and re-sequencings, all shaded by individually graded "attacks and coordinations." Actual tones accompany the dance as vivid pulse because of the "internal accompaniment" dramatically created by "The Fugue's" footfalls on an electronically amplified stage. The work will be staged at Princeton by Class of 1932 Visiting Lecturer Jennifer Way Rawe, a member of Twyla Tharp Dance from 1975 to 1988.

Tickets are $15 for general admission and $10 for faculty, students, senior citizens and children. They are available online through University Ticketing or by calling (609) 258-9220 and through the McCarter Theatre box office at (609) 258-2787. There are a limited number of complimentary tickets for the Saturday and Sunday performances. Princeton faculty and staff members may obtain two free tickets to these performances by calling the McCarter box office and mentioning the "Princeton University Special Offer." 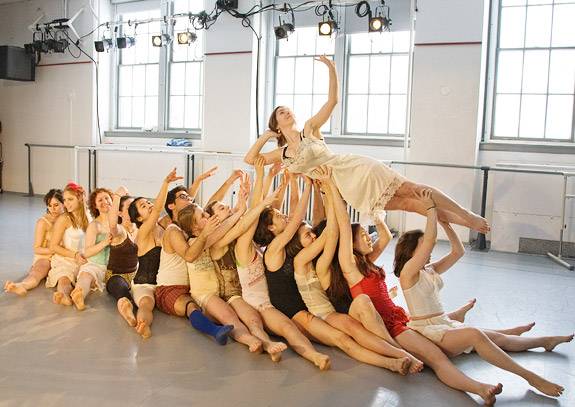 Lazier's comedic dance is set to the music of Pink Martini. It is inspired by shifting desires, clothes and hearts. (Photo: Denise Applewhite)