Many students come to Princeton with a talent for dance already well established. Others begin to explore dance as a new passion as part of their undergraduate experience. For all of these students, the annual Spring Dance Festival offers an opportunity to bring months of dance study and rehearsal to the stage, performing works by celebrated choreographers as well as original pieces students had a role in creating.

This year, more than 50 Princeton students from a range of academic departments will perform in the festival, which will be held Friday through Sunday, Feb. 24-26, at the Berlind Theatre at McCarter Theatre Center. The festival is presented by the Lewis Center for the Arts.

Many of the students who will perform decided to come to Princeton for the opportunity to seriously pursue dance training while concentrating in a major in another field. Junior Lisa Einstein, a physics major, said she "chose Princeton because, of all the liberal arts programs I looked at, it had the most vibrant and growing dance program. When I saw the professors and guest choreographers involved in the program, I knew this was somewhere I could really grow as a dancer." 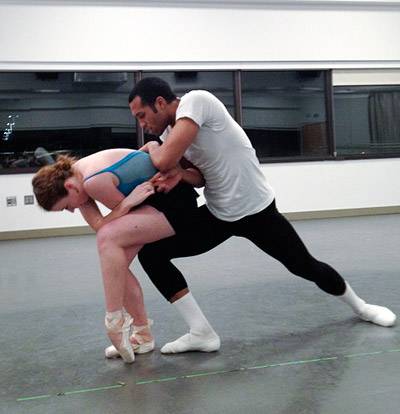 Highlights of the festival this year include works by ballet legend George Balanchine and contemporary choreographers Doug Varone and Jessica Lang, as well as a reinterpretation of a signature work of the Trisha Brown Dance Company. Choreography created by Susan Marshall, director of Princeton's Program in Dance, in collaboration with the students, along with original music by the composer David Lang, will be presented by students from the Princeton Atelier course "Bodies and Guitars." A new work will be performed by students guided by Rebecca Lazier, senior lecturer in dance, inspired by the Balanchine repertoire they studied over the fall. New dances created with students by choreographers Adam Barruch and Brian Brooks will round out the festival.

"The festival is a great opportunity for our students to put into practice all that they have been learning," Marshall said. "I am thrilled with the way our dancers have risen to the demands required by this rich, diverse and challenging evening of dance." 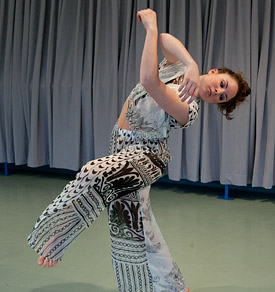 Sophomore Samantha Gebb performs in "Set and Reset/Reset," based on the Trisha Brown Dance Company's signature work. Showtimes for the Spring Dance Festival are 8 p.m. Friday, 2 and 8 p.m. Saturday, and 1 p.m. Sunday. The event is sponsored by the Program in Dance in the Lewis Center for the Arts. (Photo by Denise Applewhite)

One of the pieces in which Einstein will perform draws its inspiration from science. "Phase Transitions," explored in a fall semester course led by Barruch, grew out of the example of the transition of matter from gas to liquid to solid.

"It was a great experience working with Adam," Einstein said. "He came in with basic dance phrases but then worked with us in the creation of additional choreography. The piece combines his base phrases and our creative derivations." She added, "It just so happened I was taking a physics course in thermodynamics at the same time."

When Princeton senior Adam Hyndman arrived at the University, he soon became involved with the theatrical arts and the varsity track team. In his junior year, the anthropology major began to immerse himself in dance.

"I had done some musical theater, sang in an a cappella group and had decided to pursue a certificate in theater," he said. "The performing area I wanted to strengthen was my dancing. The inclusive nature of the Lewis Center, having all the art forms in one center, helped open up the option to take courses in dance."

Hyndman will dance in three pieces in the festival that grew out of his studies this fall. He will perform in the new work created in the Atelier course "Bodies and Guitars," for which students and Marshall choreographed dances to original music to explore questions of structure and form.

He also studied in a course co-taught by former New York City Ballet principal dancer Heather Watts and Lazier titled "Chamber Dance: Repertory and Choreography," which focused on Balanchine's work. He will perform in Balanchine's "The Four Temperaments," as well as a new piece inspired by Balanchine's work and guided by Lazier.

Hyndman said that in learning about the legendary ballet choreographer's repertory, he felt somewhat intimidated at first with little prior ballet training compared to his Princeton peers. However, he said he surprised himself. "The experience was transformative and took me on a journey of discovery that helped me realize what I actually could do," he said. 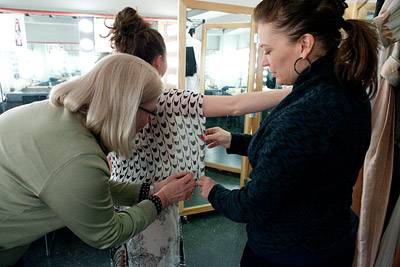 Catherine Cann (left), the costume shop manager in theater and dance at the Lewis Center for the Arts, and Mary Jo Mecca, costume designer for the Spring Dance Festival, fit Gebb with a costume for "Set and Reset/Reset," which will feature sets and costumes based on the original designs by Robert Rauschenberg. (Photo by Denise Applewhite)

The opportunity to include dance as part of her studies also was a deciding factor for sophomore Casey Brown — who is considering majoring in English — in choosing Princeton. "When I arrived at Princeton, the dance program was even more amazing than I had realized, with great opportunities to connect to what is happening in the contemporary dance world," she said.

Brown points to the unforgettable experience of learning from Eva Karczag and Vicky Shick, former members of the Trisha Brown Dance Company, who were visiting lecturers in the fall.

"Eva and Vicky brought us the same basic dance phrases and instructions that Trisha Brown gave to her dancers when she first created 'Set and Reset' for her company," Brown said.

One of the challenges for the class was to improvise a new interpretation of the well-known piece, called "Set and Reset/Reset."

"It was very difficult, but a great experience," said Brown, who will also perform at the festival in "The Constant Shift of Pulse" by choreographer Varone.

Junior Katy Dammers, whose academic focus is art history, noted that the dance program "challenges my understanding of what I thought I already knew about dance."

She will dance in "Set and Reset/Reset," having seen the original piece performed by the Trisha Brown Dance Company, and also having helped curate an exhibit on the 40th anniversary of the company while working this past summer at Jacobs Pillow Dance Festival in Massachusetts.

During the fall semester, Dammers made other connections in the arts through the course "Muscle/Memory," exploring the relationships between sculpture and dance. "This was the first time I took an art studio class, which gave me a new perspective as an art history major, looking at the creative side," she said. She noted that the experience broadened her view of what can be understood as art.