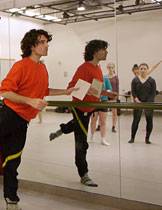 Princeton students in the Program in Dance are preparing for two February events that celebrate the mid-20th-century collaboration of dancer and choreographer Merce Cunningham and artist Robert Rauschenberg. Silas Riener, a 2006 Princeton alumnus and former member of the Merce Cunningham Dance Company, is teaching the students a "collage" of Cunningham repertoire to be performed at the Princeton University Art Museum and the Berlind Theatre, McCarter Theatre Center.

Princeton students in the Program in Dance are preparing for two February events that celebrate the mid-20th-century collaboration of dancer and choreographer Merce Cunningham and artist Robert Rauschenberg. Silas Riener, a 2006 Princeton alumnus and former member of the Merce Cunningham Dance Company, is teaching the students a "collage" of Cunningham repertoire to be performed at the Princeton University Art Museum and the Berlind Theatre, McCarter Theatre Center.

Video stills courtesy of the Lewis Center for the Arts

Silas Riener, a 2006 Princeton alumnus and a former member of the Merce Cunningham Dance Company, has returned to campus to work with students in the dance program at the Lewis Center for the Arts on two performance projects that celebrate the mid-20th-century collaboration of dancer and choreographer Merce Cunningham and artist Robert Rauschenberg.

In this video, Riener explains how he selected a "collage" of pieces choreographed by Cunningham, comprising dance repertory from the 1960s to the 2000s, to teach the Princeton students. The compiled works, titled "MinEvents for Princeton," will be performed at two events: "Spheres of Influence" at 6:30 p.m. Thursday, Feb. 14, in the Princeton University Art Museum, and the Program in Dance's Spring Dance Festival at 8 p.m. Friday through Sunday, Feb. 22 to 24, in the Berlind Theatre, McCarter Theatre Center.

The opportunity to learn from a professional dancer at the apex of his career made an impression on the students. "In my dance experience, most dance teachers are retired performers," said Tess Bernhard, a junior majoring in ecology and evolutionary biology who is earning a certificate in dance. "Silas is so much in his prime, fresh out of the Merce Cunningham Dance Company, and can really demonstrate this work that he was performing just last year or the year before."

Freshman Colby Hyland observed how carefully Riener worked with the students, many of whom have had little experience with dance. "Silas definitely took a lot of time explaining each step," he said. "How he took Merce's original notes, how he transitioned from each movement and the timing — it's so intricate, and I think it's really amazing how he transformed that and set it all on us."

Cunningham had an enormous influence on American dance in the 20th century and was at the forefront of the avant-garde for more than 50 years. His frequent collaborations with other artists included not only Rauschenberg but also musicians John Cage and David Tudor; visual artists Jasper Johns, Roy Lichtenstein, Frank Stella and Andy Warhol; and designers and architects. Rauschenberg served as the Merce Cunningham Dance Company's resident designer from 1954 through 1964 and created "décor" (sets and costumes) for several of the company's early works.

"Spheres of Influence," the program at the museum, begins in the Marquand Mather Gallery with a student-led tour of a selection of paintings, drawings and prints from the 1960s and 1970s — including works by Rauschenberg created for the Merce Cunningham Dance Company — on loan from the Robert Rauschenberg Foundation. The exhibition is the first of several the museum will present through the new Rauschenberg Loan Bank Program.

Following the tour, students from the Program in Dance will perform "MinEvent for Princeton" in another of the museum's galleries. Jeff Snyder, co-director of PLOrk (Princeton Laptop Orchestra), and Cenk Ergün, a graduate student in music composition, both in the Department of Music, composed the music for the performance and will provide live accompaniment.

The performance will be followed by a panel discussion moderated by Claudia La Rocco, a visiting faculty member and frequent contributor to The New York Times, with Nancy Dalva, Merce Cunningham Trust Scholar-in-Residence; John King, composer/performer and former co-director of the music committee for the Merce Cunningham Dance Company; Abigail Sebaly, Cunningham Research Fellow at the Walker Art Center; and Riener. A reception in the Sterling Morton Gallery will conclude the evening.

The Spring Dance Festival program will include a slightly different "MinEvent" of Cunningham choreography, as well as performances by more than 50 students of excerpts of works by internationally recognized choreographers Mark Morris, Zvi Gotheiner and Karole Amitage, and the premiere of two works by New York-based choreographers Raja Kelly and Laura Peterson created in collaborations with Princeton dance students.

Riener said the experience of coming back to campus and working with the students has been particularly meaningful. "I feel like I have something now to offer back to the University community at large. It feels really special," he said.