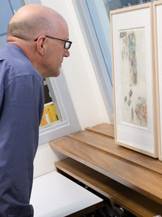 The work of Princeton students in the spring course "Seminar in Modernist Art and Theory: The World of Rauschenberg" will contribute to the planning of a major upcoming exhibition of the artist's work at the Museum of Modern Art (MoMA). Above, co-instructor Hal Foster, the Townsend Martin, Class of 1917, Professor of Art and Archaeology, examines Rauschenberg's suite of "34 Drawings for Dante's Inferno" during one of the class's five trips to MoMA.

This spring, 15 Princeton undergraduate and graduate students are immersed in the art and influence of Robert Rauschenberg in "Seminar in Modernist Art and Theory: The World of Rauschenberg," which lays the groundwork for a major upcoming exhibition at the Museum of Modern Art (MoMA) in New York.

The instructors: The class is co-taught by Hal Foster, Princeton's Townsend Martin, Class of 1917, Professor of Art and Archaeology; and Leah Dickerman, curator of painting and sculpture at MoMA.

Foster is an authority on modernist and contemporary art and theory whose most recent book is "The First Pop Age: Painting and Subjectivity in the Art of Hamilton, Lichtenstein, Warhol, Richter and Ruscha." He is a 1977 graduate of Princeton who joined the faculty in 1997. Dickerman joined MoMA in 2008 after serving as acting head of modern and contemporary art at the National Gallery of Art in Washington, D.C. In 2010 they co-taught "The Origins of Abstraction," prior to a MoMA exhibition marking the 100th anniversary of the emergence of abstract art.

The artist: American painter, printmaker and performance artist Robert Rauschenberg (1925-2008) was known for his innovative techniques and avant-garde collaborations with other prominent contemporary artists. According to Foster, the artist did more than anyone to expand the field of visual art at mid-century in terms of both content and media.

Co-instructor Leah Dickerman, left, curator of painting and sculpture at MoMA, discusses how Rauschenberg created the "Inferno" series. "Teaching this seminar is … a laboratory for thinking about some of the problems of the exhibition," she said.

The course: Each week, students explore a different aspect of Rauschenberg's work and artistic life. Through readings, lectures and visits from guest scholars, they have delved into the Rauschenberg's collaborations with choreographers Merce Cunningham and Trisha Brown; composers John Cage and Morton Feldman; and artists Cy Twombly and Jasper Johns. They have learned about the years Rauschenberg spent at the experimental liberal arts school Black Mountain College in Black Mountain, North Carolina, where he and his peers studied with German émigré Josef Albers, among others.

"The seminar is an occasion not only to think about connections among the arts but also to trace trajectories across the prewar and postwar periods," Foster said. 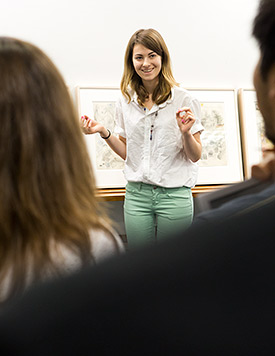 Junior Elise Rise points out several images — flowers, a grand arch and a race car — that Rauschenberg transferred from magazines to represent characters, concepts and motifs in Dante's cantos, a technique he used throughout the series.

Helping plan an exhibition: "Teaching this seminar is a way of having to articulate my thoughts in advance of the exhibition," said Dickerman. "Getting ready to teach each session is a very helpful exercise. Hal, a longtime interlocutor, and the students provide great conversation and feedback. It's a laboratory for thinking about some of the problems of the exhibition."

"Each week students write up 'work sheets' on specific pieces we will discuss, summarizing key information about production, exhibition and provenance," Foster said. "This data is enormously useful for the planning of the show and catalogue. But the course is not simply preparation for the exhibition; the students confront many questions about the transformation of the arts, some of which remain urgent today."

Visiting MoMA: The class includes five trips to the museum. On April 8, the students explored Rauschenberg's suite of "34 Drawings for Dante's Inferno." The museum arranged for the pieces, which are not currently on view, to be brought into a study room.

The group was met in the lobby by Frances Jacobus-Parker, a doctoral candidate in Princeton's Department of Art and Archaeology and a fellow in MoMA's Museum Research Consortium — a partnership with five universities to train the next generation of museum curators and art historians.

Swiping her ID through several doors, Jacobus-Parker ushered the group into the hushed suite on the fourth floor where the museum's researchers work. One last swipe opened the double doors to a large study room with an immense white table in the middle. The drawings in the "Inferno" series were set around the room on a narrow shelf that intersects the walls at waist height.

The students began to look closely at the artwork, which they had previously seen in books. On the table several issues of Sports Illustrated from 1958 showed photos of wrestlers, tennis players and an advertisement for golf clubs. 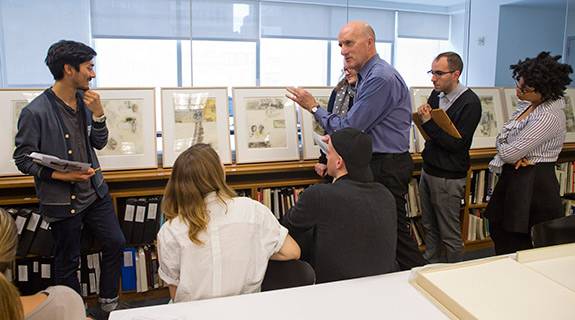 The art: Dickerman explained that the "Inferno" series is significant because it marked Rauschenberg's move from painting-sculpture "combines" to works involving mass-media images. Each drawing — one per canto — depicts the artist's visual interpretation of Dante's poem of the underworld. Rauschenberg chose images from the magazines, as well as newspapers, to represent characters, concepts and motifs in the cantos. Using a technique called solvent transfer, he transferred the images on paper. He then used pencil, gouache and watercolor to connect and relate the images to one another on the page, creating the final artwork.

As the students examined the drawings, picking out athletes, models, advertisements, politicians, buildings and other images, Dickerman encouraged them to think about Dante's "Inferno" as "a world of highly wrought scenes conjured in words that Rauschenberg takes and turns into images." 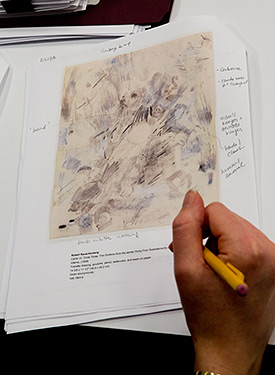 Frances Jacobus-Parker, a doctoral candidate in Princeton's Department of Art and Archaeology and a fellow in MoMA's Museum Research Consortium, takes notes during the student presentations.

The art lesson: The students had been assigned one drawing each and asked to come prepared to share their thoughts about the relationship between Dante's text and Rauschenberg's drawings.

Junior Elise Rise of Richmond, Virginia, an art history concentrator in art and archaeology who is also pursuing a certificate in visual arts, presented "Canto IV: Limbo, Circle One, The Virtuous Pagans." As she summarized the narrative of the canto — in which Dante and the ancient poet Virgil walk through the first circle of hell — she pointed out some of the transfer images: flowers, a grand arch, a race car that Rauschenberg placed as if it is crashing into a building.

Rise said: "I look at the crash as either Rauschenberg being frustrated with Dante's willingness to put great figures of human reason in hell or as a comparative moment, a foreboding: if this is the first circle of hell, where do you think this is going?"

Dickerman asked, "What happens in that solvent transfer process that you think is interesting?"

"Transference works perfectly for Dante because we're talking about souls," Rise said. "We're looking at these imprints of a solid thing, and they come out so ghostly and unfinished — I think he probably looked at this process and thought how it represents this ethereal essence of what we know of the corporeal." 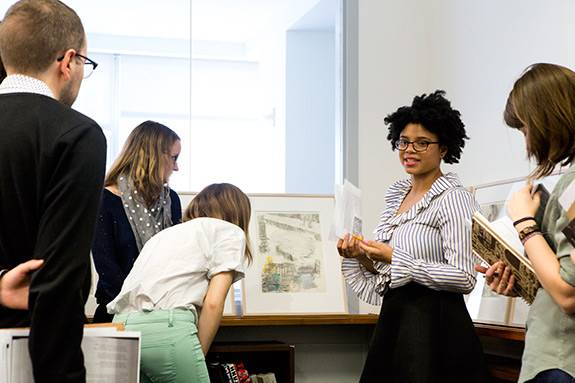 Jessica Bell, a doctoral candidate in the Department of Art and Archaeology, highlights some of the details in one of the Rauschenberg drawings. "Every seminar session is like a big think tank — we've made some cool discoveries and have sharpened our tools for meticulous research along the way," she said.

A unique experience: Senior Ryohei Ozaki, who was born in Tokyo, is a French and Italian major and is considering becoming an art curator. "It's interesting to have both sides — Professor Foster with the more theoretical, academic side, and Leah, who's very academically trained but has a more practical, curatorial way of thinking," he said.

Jessica Bell of Brooklyn, New York, a first-year doctoral candidate in the Department of Art and Archaeology, likes the object-based discussion that goes with planning an exhibition.

"Presenting an object, as with the 'Inferno' series, allows us to treat every key work like a case study that will assist in parsing out a wider narrative of the artist's practice," Bell said. "Every seminar session is like a big think tank — we've made some cool discoveries and have sharpened our tools for meticulous research along the way." 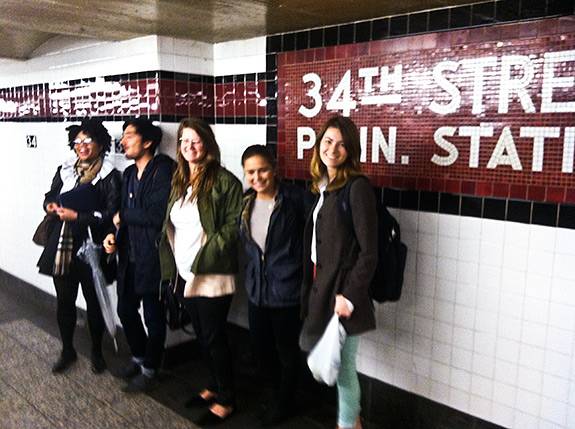 The trip into New York is as much a part of student experience as the museum visits. (From left) Bell, Ozaki, sophomore Elizabeth Mott, sophomore Sterling Sipp and Rise wait for the subway at 34th Street Station.