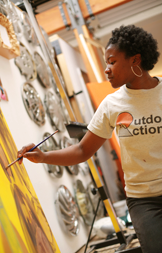 Temitayo (Tayo) Ogunbiyi is producing an exhibition of original artwork as well as a written thesis on the 1993 Whitney Biennial for her senior thesis in art and archaeology and in visual arts. An opening reception for her exhibition, "Extended Extensions," is set for 6 p.m. Tuesday, May 2, in the Lucas Gallery at 185 Nassau St. Exhibition hours are 10 a.m. to 4:30 p.m. on weekdays May 2-9.

The Program in Visual Arts will present an exhibition of student work from spring semester courses from Tuesday, May 23, through Tuesday, June 6, in the galleries at 185 Nassau St.   An opening reception is set for 6 p.m. May 23 in the galleries, followed by screenings of student videos beginning at 7:30 p.m. in the Stewart Film Theater.   Regular exhibition hours are 10 a.m. to 4:30 p.m. on weekdays.

As an artist and a student of art history, senior Temitayo (Tayo) Ogunbiyi is drawn to works that challenge conventional notions of categorizing people by appearance, gender, nationality or other easily accessible characteristics.

These themes of identity and classification infuse Ogunbiyi’s senior thesis in the Department of Art and Archaeology, where she is completing her major, and the Program in Visual Arts, where she is a certificate candidate. Ogunbiyi is producing a written thesis examining the influence of the 1993 Whitney Biennial, a controversial exhibition of contemporary art. She also is mounting an exhibition of her original artwork — an eclectic collection of some 40 paintings, sculptures and textile designs — that will run from May 2-9 in the Lucas Gallery at 185 Nassau St.

While grappling with questions of identity in her studio work, Ogunbiyi focused her written project on how those issues were confronted by the 1993 Biennial exhibition at the Whitney Museum of American Art in New York.

“The exhibition aimed to give artists a place to talk about themselves and culture — topics that had almost become taboo with the Abstract Expressionists and Minimalists, whose work became very cold and very much about the artists taking themselves out of the work,” Ogunbiyi said.

“This exhibition was incredibly important conceptually because it pushed culture, it pushed homosexuality, it pushed femininity, it pushed people of color. It put all of them in the forefront and said, ‘Talk about your American experience,’” she noted. “It was controversial because it marginalized the white, heterosexual male; questioned the level of formal training necessary; and painting, considered to be the staple visual art form, was underrepresented and replaced by video and installation.”

Ogunbiyi interviewed artists and curators involved with the Whitney exhibition, as well as current student artists, to better understand its influence. She also delved into questions of how religion, spirituality and alternative art forms were represented in the exhibition by artists such as Kiki Smith and Byron Kim.

“Art history tends to organize itself in terms of chronology, geography and/or nationality, but Tayo is interested in the manner in which other categories or identity ascriptions — from race or ethnicity to religious affiliation — explicitly or implicitly structure the way scholars, critics and audiences see and understand the work of contemporary artists,” said Rachael DeLue, an assistant professor of art and archaeology who is one of Ogunbiyi’s thesis advisers.

“Her work considers both the overt and conscious as well as the unconscious or surreptitious categorizations that define and propel the fate of art in multiple contexts: institutions, the marketplace and the academy,” DeLue said.

To prepare for her own exhibition, Ogunbiyi spent part of last summer studying printmaking, photography, painting, sculpture and drawing at Yale University’s prestigious Summer School of Art at Norfolk, as one of 26 participants from around the country. The Lower Gwynedd, Pa., native also visited artists in Jamaica, her mother’s birthplace, and traveled to her father’s home country, Nigeria, to learn basket weaving and techniques used in creating traditional fabrics.

In her studio at 185 Nassau a few weeks before her exhibition, which is titled “Extended Extensions,” Ogunbiyi offered a tour of her finished pieces and works in progress. One painting depicted her forearms, twisted but linked by an eye-shaped scar — a childhood wound that still marks her right arm. Another painting featured portraits of a friend’s face in various sizes and expressions. A hand-sized sculpture of a nose and mouth in abstract — one of 22 such pieces she has made — sat in a jar on a work table. On another canvas, swatches of denim were stretched and connected to create a cross between painting and sculpture, one of many pieces incorporating elements of different materials and art forms.

“The artist is the one who has to mend the fragments for them to make sense,” she said. “That’s something that’s always interested me, the variety of ways in which you can connect ideas, concepts and materials to present a certain point of view or articulate certain ideas to the viewer.”

DeLue said, “One of the things that I find most compelling about Tayo’s studio work is its engagement with circulation systems: the way in which products, ideas and images circulate in a global marketplace. … What Tayo says about circulation in her art — that it isn’t seamless or neat and that it can involve rupture, violence or misrecognition — speaks eloquently to the difficulty, even perversity, of defining or knowing identity (national as well as individual) in the 21st century.”

In addition to DeLue, Ogunbiyi worked closely with Greg Drasler and Andrea Belag, lecturers in visual arts and the Council of the Humanities, as well as other faculty members and professional artists and curators who have visited Princeton to teach or give talks.

Ogunbiyi, who initially intended to follow a pre-med track at Princeton before deciding to focus on art, said she has gained insights into her studio work and art criticism through the variety of courses she has taken at Princeton, particularly in the sciences.

“The ideas behind process and procedure have become really important for me in terms of presenting certain concepts or grappling with certain ideas,” she said. “The step-by-step way I conducted certain experiments in my science classes informs how I approach my artwork and the questions I have about visual arts and my experience. I don’t know that I would be thinking through the work the way I do if I hadn’t taken those classes.”

This summer, Ogunbiyi will be an intern at the Studio Museum in Harlem, working on outreach programs, while making future plans. She would like to take classes in painting and sculpture at the Edna Manley College of the Visual and Performing Arts in Kingston, Jamaica, and also is considering job opportunities at the Museum of Contemporary Art in Miami or various artist’s residencies. Eventually, she would like to run her own art gallery.