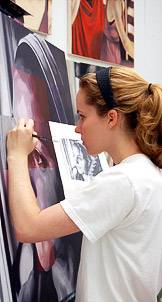 The Lewis Center for the Arts is hosting an exhibition of artwork by students in the Program in Visual Arts -- highlighting selected pieces from each of the courses offered this spring -- from May 19 through June 4 at 185 Nassau St. Here, freshman Kay Ousterhout works on one of the featured paintings, which appears to be a self-portrait but is actually a portrait of a close friend who shares the same likeness. (Photo: M. Teresa Simao)

A sprawling exhibition of artwork by students in the Program in Visual Arts in the Lewis Center for the Arts will be on view from May 19 through June 4 at 185 Nassau St.

"Student Art: Work From the Spring 2008 Semester" highlights selected pieces from each of the courses offered this spring, including installations, paintings, ceramics, sculptures, photographs, drawings, and intaglio and relief prints. The vast amount of artwork in this exhibition is displayed on the walls and pedestals in the first floor gallery and the second floor Lucas Gallery at 185 Nassau, along with nearly a dozen installation pieces scattered throughout the building, which visitors can locate with a map prepared for the exhibit.

"The first year in which the visual arts program has been a part of the Lewis Center for the Arts has been exceptionally productive," said P. Adams Sitney, director of the program. "We had a record number of 14 thesis shows and new work in video, painting, sculpture, photography, printmaking, ceramics and installation art."

Among the new work featured in this group show is a series of multimedia projects by students in the installation course taught by lecturer Christian Tomaszewski. The installation projects stem from two major assignments, the first which explored issues of time, duration and change by creating time capsules. The resulting works range from poetic video and sound installations to humorous interpretations of art history.

One installation assignment challenged students to create an autobiography or create a self-portrait, either real or made up. These projects mix found objects taken out of their usual context with elements crafted or reconstructed by students. "Installation art often tells a story or implies some form of a narrative," said Tomaszewski, who asked his students to "imagine that your potential viewer is someone who doesn't speak your language and you can communicate only through presenting an unusual combination of things available to you."

One installation assignment challenged students to create an autobiography or create a self-portrait. Freshman Nick Slavin's narrative takes the form of a monumental light box made of foam core board, which is perforated by a series of X-ray panels, each depicting a silhouette created by a plastic action figure. (Photo: M. Teresa Simao)

Freshman Nick Slavin tells his narrative through a monumental light box constructed of foam core board, which is perforated by a series of X-ray panels, each depicting a silhouette created by a plastic action figure. One of the challenges in creating the piece was to find a way to X-ray the figures, because plastic doesn't show up on the film. Slavin solved the problem by pressing the plastic figures into clay to create a mold, which he then filled with solder. The resulting solder forms were used to create the X-ray images. 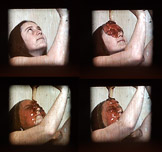 Junior Anna Miller's installation project, "Untitled (Honey)," includes a video of Miller pouring honey on herself that is shown inside an 8-foot-high plywood box. According to her description of the project, "A fleeting gesture of indulgence absurdly sweet and decadent is performed in a small room in hopes that the satiating sensation induced might stick." 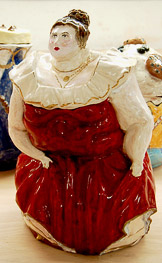 The exhibition also includes a wide range of vessels and art forms by students in the ceramic courses taught by lecturer Ann Agee and Steven Keister. Agee's course centered on ways of building with red earthenware clay while looking at various examples from China, Greece and Europe. Students also were asked to copy the technical process of 18th-century European porcelain. "The work tended to be big, addressing design, function and kitsch, which is an important part of the ceramics spectrum," Agee said.

One of the projects was to make a cookie jar. Sophomore Grayce Mei looked at a couple of historical sources, including a medieval German vessel that had a half-naked man in high relief and a few serpents on the side. She used these elements on her own vessel and then added clay chocolate chip cookies. Finally she painted the piece with simple shapes and added gold luster rings to the lip, an element also inspired from a historical source. Sophomore Talia Nussbaum made a supersized woman in a flowing gown. Her head is the knob of the lid, and the opening is the low cut neckline of her red dress. Sophomore Ben Laguna created a series of clay figures that began as an exploration of the body from a quasi-medical point of view. Laguna said he was inspired by the wax medical models from Il Museo Della Specola in Florence, which were made in the late 18th century as teaching tools. 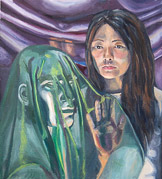 Freshman Snow Li's self-portrait is one of the works on display from an "Introduction to Painting" course. (Photo: M. Teresa Simao)

Perception and precedent was the conceptual framework in lecturer Brian Jermusyk's "Introduction to Painting" course. "It attempts to engage students' visual participation with the world through painterly strategies that flourished in 19th-century French painting, temporally framed by Corot and Matisse: value, color and shape as keys to the expression of light. The intent is to provide students with a historically alert way to think about picture making, but as a manner of orientation, not limit," explained Jermusyk. Students in his class were asked to paint a self-portrait, a study of a masterwork and a narrative painting of their own invention. Freshman Snow Li's self-portrait is just one of the stunning paintings that arose from Jermusyk's course.

Portraiture was the subject matter chosen by freshman Kay Ousterhout, a student in lecturer Julia Jacquette's "Introduction to Painting" class. Jacquette challenged her students to be self-directed in their final projects and make all their own choices about subject matter, size, imagery and color. Ousterhout's painting appears to be a self-portrait but is actually a portrait of a close friend who shares the same likeness. 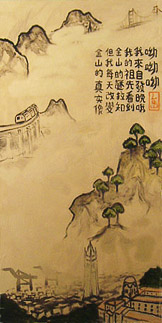 Sophomore Evangeline Lew titled her painting in honor of her ancestors who came from China to "Gold Mountain," the name given to San Francisco in the mid-19th century. The painting integrates Lew's Chinese and American cultures. (Photo: Joan Waltemath)

Lecturer Joan Waltemath said the "most significant" piece to come from her "Advanced Painting" course was "Gold Mountain" by sophomore Evangeline Lew, "who found her voice in her final project." Lew used a traditional form of Chinese painting to talk about contemporary issues. She titled her painting in honor of her ancestors who came from China to "Gold Mountain," the name given to San Francisco in the mid-19th century. The painting integrates Lew's Chinese and American cultures by incorporating landmarks from the Bay Area where she grew up to represent her American heritage -- including the Golden Gate Bridge, the Bay Area Rapid Transit system and the tower from University of California-Berkeley, where her parents met -- with a poem written in Chinese characters. (Lew will visit China for this first time this summer through Princeton's Study Abroad Program.) Although she doesn't speak or read Chinese, classmate Sherry Zhang helped her learn the Chinese characters in order to include the poem on her painting, which translates as "Yo, yo, yo, I'm from the 510, Gold Mountain might have been a mirage for my ancestors, but I am making it real every day." 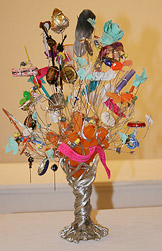 Sculpture students were asked to create a piece of great beauty from found or deliberate objects. Sophomore Maria Phillip's sculpture, "Remember When," is a bouquet made from a broken wine glass wrapped by multiple strands of silver wire, the ends of which hold bottle caps, pieces of gum, a feather and a small clusters of cloth. (Photo: Paul Csogi)

Students in Professor James Seawright's "Introductory Sculpture" course were asked to create a sculpture from found or deliberate objects and create a piece of great beauty. "Each object chosen," said Seawright, "is a personal statement as it has a special significance to the person creating the work." Sophomore Maria Phillip's sculpture, "Remember When," is a bouquet created of her remembrances that include a broken wine glass wrapped by multiple strands of silver wire, the ends of which hold bottle caps, pieces of gum, a feather and a small clusters of muslin cloth, the type divers use to wipe themselves after dives. Phillip is a member of Princeton's diving team.

The exhibition is one of the largest ever presented by the Program in Visual Arts, reflecting the growing number of students participating in the arts at Princeton. The exhibition will be on view weekdays from 10 a.m. to 4:30 p.m. An opening reception will be held from 6 to 8 p.m. May 19 in the Lucas Gallery.

Concurrent with the exhibition opening, a film and video screening will take place from 7:30 to 9:30 p.m. May 19 in the Stewart Film Theater. The screening will highlight the work of 20 students in the spring semester video and film production courses taught by Professor Su Friedrich and lecturer Keith Sanborn.