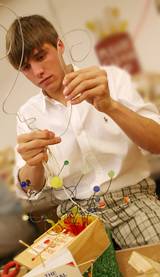 Sophomore Tim Edmond made a sculpture of found objects in “Introduction to Sculpture."

Sophomore Tim Edmond made a sculpture of found objects in “Introduction to Sculpture."

From the April 25, 2005, Princeton Weekly Bulletin

At a table covered with sculpture of various shapes, colors and materials, four undergraduate students made final modifications to their artistic creations. A mobile of interconnected wooden pieces dangled above like a 3-D jigsaw puzzle. Its creator, senior Hilary Zaic, carefully moved a small cube from one ledge to another. “I call it ‘Playtime,’” she said, “because it reminds me of building with blocks as a child.”

The class is “Introduction to Sculpture,” and with the warm spring air entering the art studio at 185 Nassau St. came the first stirrings of ideas for the next and final assignment: how to create a piece that exhibits temporality.

“It can be real or implied temporality,” James Seawright, professor of the Council of the Humanities and visual arts, tells the eight students, few of whom have taken other visual arts classes.

He is guiding them on a journey — drawn from his wealth of experience — with many lessons along the way about perception. “Any physical object that exists in the world takes time to see,” he said. 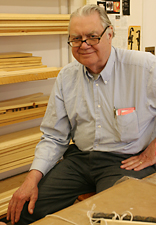 Recognized as a foremost technological artist since his first art show in New York City in 1966, Seawright has produced works that are in the permanent collections of the Museum of Modern Art, the Whitney Museum and the Guggenheim Museum of New York, the Rose Art Museum at Brandeis University, the New Jersey Museum at Trenton and other museums around the world. His sculpture is known for its kinetic quality, often powered by electronic devices or natural forces such as sunlight. This past winter, his exhibit “Constellations,” which was inspired by various constellations and featured works created between 2001 and 2005, was on view at William Paterson University in Wayne, N.J.

Seawright started teaching at Princeton in 1969, joining a painter and a potter on the visual arts faculty. He served as acting director and then director of the Program in Visual Arts from 1975 to 2001. During his tenure, the faculty grew to 22 primarily part-time members representing a range of talents and philosophies within the art world. In recognition of his distinguished achievement in the humanities, Seawright was awarded a Behrman Award from Princeton in 2004. A graduate of the University of Mississippi, he received a lifetime achievement award in 2003 for his contributions to sculpture from the Mississippi Institute of Arts and Letters.

Instrumental to Seawright’s development as an artist was his boyhood discovery of machine tools at a friend’s house in Mississippi, which launched his lifelong love of making objects by hand. Later, when serving in the U.S. Navy, he pursued every available opportunity to work with new tools and materials, gravitating toward the machine shop on his ship and the hobby shops at the base where he made furniture.

When he moved to New York in 1961, Seawright prowled Canal Street for electronic parts that proliferated after World War II. Inspired by the Bauhaus movement, which he said “was doing revolutionary things with light even before the war,” he realized that he could “use modern electronics and controlled technology to apply to sculpture.” Seawright became a pioneer of interactive sculptures, over time using components from transistors to analog circuitry to microprocessors in his work.

Despite his vast experience with advanced forms of expression, Seawright still relishes the task of teaching the basics to a small group of undergraduates.

The first couple of weeks of the introductory sculpture class are devoted to making a likeness of another classmate’s head out of clay, and then firing it in a kiln. “Everyone knows how to work with clay,” said Seawright. “The difficulty is capturing the likeness.” The problem Seawright emphasizes with this assignment is the “difference between merely looking and seeing,” and he also uses it to make a connection to the age-old tradition most cultures share of trying to replicate the human figure.

As the class progresses, students explore working with a range of other materials useful to aspiring sculptors, such as plaster, burlap, chicken wire, lumber and metal of many widths and lengths. With the raw materials stored in the studio, it is easy for students to experiment with them, hauling whatever looks interesting to the adjoining machine shop to shape as necessary for their projects.

Leaping from the highly specific to the abstract, Seawright then introduces two new problems: the first to make an abstract composition out of wood; the second to create a “psychological profile” from found objects.

Throughout the studio, the students’ creations show their own unique interpretations of these assignments.

For the wood project, sophomore Kathleen Miller created a piece called “Starburst,” which has about 30 wooden stars of various sizes connecting at multiple points. Contemplating her upcoming graduation, senior Courtney Homan-Jones constructed an upright wooden frame woven with string from which jut a staircase and a bridge, both leading to an unknown, open future.

“It’s great that Professor Seawright lets you do your own thing,” she said, “and he’s a real help when you hit an obstacle.” For Homan-Jones, Seawright’s suggestion to use a wooden board for mounting her sculpture proved necessary to keep it stable.

The found-objects assignment elicited a range of inventive sculptures. Junior Lauren Bush built a house out of matchbooks found at a vintage store in Texas, which she placed alongside a plaster cast of her own hand holding a lighter. Sophomore Tim Edmond created a wooden jack-in-the-box out of which spring marbles attached to curved wires. “It’s kind of a coming-of-age piece,” he joked. Homan-Jones attached various lengths of wire to two upright, hole-riddled metal sheets from an old radiator; and Zaic created what she called a “contained zoo” of assorted jars filled with coins, buttons, plastic animals and other found objects.

Seawright also teaches an advanced sculpture course, but only when not teaching the introductory course; currently, the advanced course is being taught by sculptor Carol Hepper. Seawright said that many of his students have gone on to careers in the arts and in support of the arts, including Christopher Janney, who explores sound as a visual medium and who teaches in the architecture school at the Cooper Union; and the late Peter Joseph, a financier who ran an art gallery and donated the Richard Serra sculpture “The Hedgehog and the Fox” to Princeton. Also, novelist Jonathan Safran Foer credits Seawright for introducing him to the work of sculptor Joseph Cornell and his distinctive boxed-in constructions and bird boxes, which inspired his anthology “A Convergence of Birds.”

In teaching the many undergraduates who have taken his sculpture classes at Princeton over the last 36 years, Seawright said the experience thus far has been “an adventure with unforgettable students.”